Home/November 2020, Opinions/Did Joe Biden Use THE HAMMER to Steal the Election?

Did Joe Biden Use THE HAMMER to Steal the Election?

The vote tally was moving in Trump’s favor – suddenly overnight Biden is winning, how?

Having personally monitored the election, I noted of course how well Trump was doing – despite the fact that Biden had more electoral votes.  In fact, Donald Trump was on track, strongly I might add to win the election.  Overnight, poof – just like that Biden is winning.  How did this happen?

On election night at 9:23pm I predicted Trump would win, here is why:

“Two states marked as a win for Biden are now being led by Trump, Virginia and Rhode Island.

If Trump wins all states he is leading in and already projected to win, he has 265 electoral votes out of the needed 270 to win. Then there are still 94 electoral votes up for grabs. Biden is likely to win California (55 votes), but Trump only needs 5 in this scenario.

Trump was at that point already winning the central U.S.  He was ahead in Michigan, Wisconsin, Pennsylvania, North Carolina, Georgia, and was gaining in Texas.  A chunk of the western U.S. was still up for grabs.  As noted above, if Trump won the states he was leading, and one more, like Nevada, he would win the election.

Then overnight, suddenly Biden is winning in Michigan, by over a 100,000 votes, and Biden is also winning Wisconsin.  How did this happen?

“Trump had a sizable lead in Michigan last night, I saw this myself.  Then out of nowhere, Biden surges ahead with 100,000’s of votes with none for Trump?  This smells of voter fraud.  Trump should have and still should win Michigan.”

Supposedly the sudden influx of votes in Michigan was a typo.  Except that I noted Biden was still ahead with a comfortable lead even after the “typo” was fixed.  Then there is the lead Trump had in Virginia and Rhode Island as stated above, except that these states were called for Biden.  Another “TYPO”? 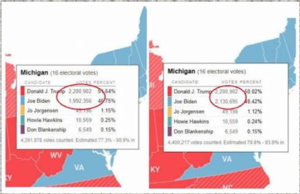 What if there was a supercomputer, and what if this supercomputer had a computer software program that was capable of election tampering at the state level?

What if I told you there actually IS such a computer, and there IS such a program?

According to This West is Our West:

Montgomery’s revelations about his super-surveillance system THE HAMMER call into question Chief Justice Robert’s strange and inexplicable 2012 decision that stood in direct opposition to his own stated legal argument. At the eleventh hour, Roberts flipped and supported the individual mandate for President Obama’s highly unpopular Affordable Care Act.

Whistleblower Dennis Montgomery had 47 hard drives of evidence that prove THE HAMMER exists.  He gave those hard drives to the FBI.  Any guesses as to who it was that ran the FBI at this point?

James Comey’s FBI effectively buried this information.  Montgomery was himself for all intents and purposes muzzled.

Does this ring any bells for anyone?  How about how the fact that the FBI had an inside witness to the Uranium One deal with Russia that Hillary Clinton helped push through and that effectively screwed the U.S.?  This witness was also muzzled.

How about a little more recent news – the effective silencing of, and the successful attempt to remove General Michael Flynn from the White House as one of Trump’s key advisors?  Flynn remember knows his way around the intelligence community and knew things.

How about the spying campaign on Trump?  It sounds like the spying was going on longer than previously thought according to This West is Our West:

“Montgomery’s identification, by name, of one particular U.S. citizen that Montgomery insists was under constant surveillance “for years” by Obama, Brennan, and Clapper via THE HAMMER has led Obama’s inner circle to take desperate measures.

The name of that U.S. citizen targeted by THE HAMMER is Donald J. Trump.”

Would it further surprise anyone that John Brennan (Obama’s CIA master) and James Clapper (Obama’s National Intelligence Czar) were allegedly involved in this entire affair?

Here is another bombshell for you:

“According to Montgomery, the FBI, under Director Robert Mueller’s leadership, provided the computers for THE HAMMER super-surveillance system.”  (Source)

And now comes the revelation that this supercomputer (using the SCORECARD program) – capable of directly interfering in the election process via state computer systems data transfer points, is being used against Donald Trump to hand the election to Joe Biden.

This would explain then how Trump could be winning, and boom – Biden is suddenly winning.  Along with the other Democrat winning ways of course.

There needs to be a very intensive and thorough investigation into all of this.

I encourage you to take the time to read the two articles that I used as the sources for this article.

The America Report – The Hammer

This West is Our West – Montgomery, ‘the Hammer’ Surveillance System Whistleblower, Became the Deep State’s Enemy Number One After Exposing the Truth

These are both good articles, the second article is long and very extensive.  There is a lot of evidence and detailed research in this one along with a comprehensive timeline of events concerning the HAMMER, Strzok and Page, Brennan and Clapper, FISA abuse, origin of the Russia collusion investigation etc.  Well worth the time to read it.

I am grateful and wish to thank Lyle Rapacki for bringing this information to my attention.

A Vote for Biden-Harris is a Vote for Abortion, Socialism, Gun Confiscation, More Lockdowns, and Loss of Freedoms