There’s sure been a lot of distractions the past couple of years. Yes, distractions that take the mind off other, especially more serious affairs, away from the things that we need to and must be working on. Things that are within our purview, like unelected bodies of regionalism. We can’t do hands-on work with a possible war in Ukraine or discover where Ghislaine Maxwell’s papers are, but we certainly can let our local politicians know what they are looking at and why we are set against it.

Here in Tennessee – along with Arkansas and Mississippi, a bill is up to be heard by the Tennessee House Commerce Committee, responsible for “legislation concerning commerce, insurance, and agriculture. The committee also has jurisdiction over legislation concerning banking and lending institutions; communications; regulation and licensing of occupations; protections of trade and commerce against unlawful restraints and monopolies; corporations; labor and industrial corporations; consumer affairs and consumer protection; and unemployment compensation.” That is a lot of control in many areas by one agency. 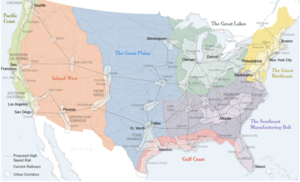 But, right now, we are looking at just one area. Of course, Regionalism isn’t listed on their curriculum vitae, but it is designed to put all these areas under unelected boards to control those and many more aspects of our lives. Do you know those on your Commerce Committee? Would you trust them to decide how, where, and if you live and do business?

This bill is: “For the purposes of improving the quality of life, promoting economic development, stimulating economic growth, minimizing unemployment, and promoting the general welfare for the benefit of the citizens of Arkansas, Mississippi, and Tennessee, these states do hereby agree and pledge to each other their faithful cooperation in the future planning and development of the RegionSmart Development District, holding in high trust for its people and the nation the natural advantages thereof. . ..”[i] Yep, it’s going to fix everything that’s gone bad lately. Seriously, folks, Regionalism[ii] is one of the dirtiest of the dirty words coming from government.

Senate Bill 1915 and House Bill 1989, sponsored by two Republicans, Senator Page Walley and Representative Kevin Waughan, would create a quasi-governmental and public entity (Public-Private Partnership)[iii] with the power of “eminent domain and condemnation of any and all rights of property,” in parts of Tennessee, Arkansas, and Mississippi.

This “RegionSmart Development District and Agency of the Greater Memphis Region “will operate virtually autonomously”. That means with no accountability to those who live under their control. You can’t vote them out, but they write it in soothing words to make you think that they’ve thought of that and are taking proper steps to assure you that you are in good hands. “The states recognize that by this Compact they are creating a quasi-governmental and public entity and it is the direction of all of the states that RegionSmart Development be conducted in a transparent and inclusive manner and thereby engender the support of the people and political jurisdictions it is to serve.” Unless you attend all the meetings, you won’t know what they are doing. And even if you did attend them, you have no way of stopping their actions; they are autonomous.

Now the crux of the problem, what they can do (I am not listing all of them, you can read the bill in endnote 1:

(5) Article IV. RegionSmart Development shall have the following powers:

What entities do you expect them to use? The usual suspects are those of Public-Private Partnerships, non-governmental organizations (NGO) connected with the U.N. – these are what they mean by “and nongovernmental entities of every kind and nature”. A very dangerous phrase.

(c) To apply for such grants and funding from governmental and nongovernmental sources to further the purposes of this Compact;

Think about this. They can take grants from World Wildlife Fund, Union of Concerned Scientists, George Soros, as well as Marxist organizations and governments. And we have learned that grants from Departments of Transportation, Health and Human Services, Housing and Urban Development have strings that cannot be untied. You take their money, you will be eased down the socialism road.

(e) To receive for its lawful activities any contributions or monies appropriated by municipalities, counties, state or other political subdivisions, or agencies, or by the government of the United States or any agency or officer thereof;

What about its unlawful ones?

(f) To receive for its lawful activities contributions of monies from nongovernmental entities or from individuals;

(h) To make plans for submission to the communities involved for coordination of streets, highways, parkways, parking areas, terminals, water supply and sewage and disposal works, recreational and conservation facilities and projects, land use pattern, and other matters in which joint or coordinated action of the communities within the areas will be generally beneficial;

That last word is key; beneficial to whom? Not to the people they serve who want their rights protected.

(w) To exercise the powers of eminent domain and condemnation over any and all rights or property, of any kind or character, necessary for the – 11 – 011587 purposes of RegionSmart Development, subject to the provisions of this Compact; provided, however, that: (i) Any decision by RegionSmart Development to exercise its authority under this paragraph shall be specifically approved by the Board of Commissioners with all members of the board in whose state the property is located voting in favor; and (ii) RegionSmart Development shall follow the procedure provided by law for the exercise of eminent domain in the state where such property is located and for the kind of property subject to such exercise;

(z) To be a planning organization with an interest in a specific or regionally significant multi-state freight corridor to promote the improved mobility of goods, including, without limitation, identifying projects along the corridor that benefit multiple states, assembling rights-of-way, and performing capital improvements;

This bill will force on us exactly what the Trans-Texas Corridor was set up to do. American Stewards of Liberty explain, “The Trans-Texas Corridor was the primary leg of what became known as the NAFTA Superhighway, a network of multi-modal transportation corridors that connected Mexican Seaports to Canada. The stated purpose of the corridor was to expedite international freight to and through America and Canada. Once the details of the bill were finally made public, Texans began to realize the TTC was a profit vehicle and not sound transportation planning. Included in the details was a non-compete clause, which made it prohibitive for any parallel road to be expanded that was within 10 miles of the toll corridor. Texans knew they had been sold out.”

There is so much more in this bill that screams Agenda 21.

Laura Baigertt, writer for the Tennessee Star gives us some more insight on it:

HB1989 was presented by its sponsor Vaughan to the Business & Utilities Subcommittee of the House Commerce Committee last week, during which he explained to his fellow committee members, “What this tri-state compact will allow us to do is to seek opportunity for funding for projects that affect a multi-state region.”

Getting to the crux of the matter which was related to accessing additional federal funding, Vaughan continued, “The federal government recognizes multi-state compacts particularly in the latest infrastructure bill and in that there were 38 separate pots of money or opportunity funds that an organization like this could secure.”

Vaughan did not say the project would have been eligible for federal funding if this interstate compact were in place, but mentioned the replacement bridge across the Mississippi River which closed a portion of I-40 for about three months during the middle of 2021.

Following Vaughan’s presentation of the bill no questions were asked about the constitutional limit of the General Assembly to delegate powers belonging to the legislative branch, about what happens if one of the two other states that are not as fiscally sound as Tennessee are unable to pay any accrued debt, and whether “the powers of eminent domain and condemnation over any and all property, of any kind of character” extend to historical properties.

Taking only about two minutes and 10 seconds between the presentation of the bill and the customary voice vote in House committees and subcommittees, HB1989 advanced to the full House Commerce Committee calendar for Tuesday, February 22.

The companion SB1915 was scheduled to be taken up by the Senate Government Operations Committee on February 16, but was deferred to March 2.

The fiscal impact of the legislation at the state and local level “cannot be reasonably determined,” due to multiple unknown variables, including “which entities will provide funding, the rate and timing of any fees charged, the amount of any funds to be disbursed, the amount of money to be borrowed, or the timing in which this may become effective,” according to the fiscal note.

If the measure receives approval of the majority of both the Tennessee House and Senate and is signed into law or allowed to go into effect after 10 days by Governor Bill Lee, the compact will go into effect upon passage of similar legislation by either Arkansas or Mississippi.

Now is the time for activists, freedom pods, and patriots to let our elected officials in Tennessee, Arkansas, and Mississippi understand we will not let them roll over us without consequences. They, unlike the members of this globalist project, are up for election. Their jobs are not secure. Let them understand that if they do not protect our property rights, we will vote them out of office. As Tom DeWeese put it so well, we awake and patriotic Americans are “dedicated to the ideals of limited government, free enterprise, and individual liberty. These are the pillars of freedom and in great need of protection in today’s dangerous political atmosphere”. We need to make these known to all our elected officials today.