Do Pets Go To Heaven?

Will the beloved earthly pets of righteous believers be able to reunite with their owners in heaven? Some say animals cannot go to heaven, as they do not have souls, while others proclaim that God loves His creation and all the animals He created and will restore them to life. This article will examine the Scripture verses related to man and animals and proclaim the belief that our beloved pet(s) will dwell with us in heaven, if that is our desire.

MAN IS A LIVING BEING, ANIMALS ARE NOT

GENESIS 1:27-27 (NKJV):
Then God said, “Let Us make man in Our image, according to Our likeness; let them have dominion over the fish of the sea, over the birds of the air, and over the cattle, overall the earth and over every creeping thing that creeps on the earth.” So God created man in His own image; in the image of God He created him; male and female He created them.

GENESIS 2:7 (NKJV) (KJV*):
And YHWH (the Lord) God formed man of the dust of the ground, and breathed into his nostrils the breath of life; and man became a living being (*soul). 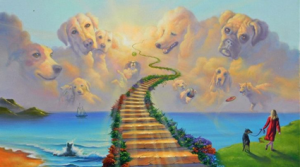 Animals were not created in the image of God, nor with the intellect and wisdom of man. The requirement for an animal to dwell in God’s kingdom is different than it is for man.

Scripture proclaims that there are four living creatures dwelling in God’s heavenly kingdom, which are not angelic beings, nor are they human beings.

REVELATION 19:11-14:
Now I saw heaven opened, and behold, a white horse. And He who sat on him was called Faithful and True, and in righteousness He judges and makes war. His eyes were like aflame of fire, and on His head  were many crowns. He had a name written that no one knew except  Himself. He was clothed with a robe dipped in blood, and His name is called The Word of God. And the armies in heaven, clothed in fine linen, white and clean, followed Him on white horses.

So, as there are living creatures in God’s kingdom, and animals do not have the same mind or soul that a person possesses, it is not necessary for animals to have a full understanding of God to be able to dwell in God’s kingdom.

Human beings must live righteously and accept Yeshua Messiah (Jesus Christ) as Lord and Savior in order to dwell eternally with God in heaven. God gave man dominion over the animals of the Earth (Genesis 1:28). Animals have been given an instinct to know that man is made in the image of God.

We are as gods to our pets. Our pets know that when we are with them they get to enjoy life better. We love our pets and feed them, shelter them, open doors for them, control the temperature, turn on the lights, clean them, groom them, pet them, make them comfortable, play with them, train them, and walk them. Our pets are happy to dwell securely with us.

PSALM 37:4 (NKJV):
Delight yourself also in YHWH (the Lord) and He shall give you the desires of your
heart.

Psalm 37 verse 4, within the full context of Psalm 37, refers to prophecy yet to be fulfilled. It speaks of a time when the meek shall inherit the Earth and the wicked people of the world are vanquished, at which time God will give His righteous saints the desires of their hearts.

God’s righteous saints, those who will dwell eternally in His kingdom, will be given the desires of their hearts. There are creatures dwelling in heaven right now, and if it is a believer’s desire to resurrect his or her beloved deceased pet, God has promised to give us the desires of our hearts.

Reuniting with our deceased beloved pets are one of the desires of our hearts that God will give us in His kingdom.