Dog Meat Soup, Now Being Served At The 2018 Winter Olympics

It has been widely reported that South Korean restaurants have been continually selling bosintang, a dog meat soup dish, in the vicinity of the 2018 Winter Olympics that are being hosted by the city of Pyeongchang, South Korea.

American Christians are horrified to learn that South Koreans breed and raise dogs for their dog meat, keeping them cramped in tight cages, and then having them slaughtered and served in restaurants for human consumption.

Americans and Western nations in general love dogs and keep them as pets. Other nations and peoples do not have the same love for dogs as Americans do.

The mainstream American Christian rightly thinks of dogs as man’s best friend, not an animal that is to be slaughtered and eaten. Yet many other people of the world do not share our affection for dogs. Koreans and Muslims do not regard dogs as special creatures. In Korea, it is culturally acceptable to eat dog meat. Who do Americans think they are to dictate what is acceptable to be eaten as meat in another culture? 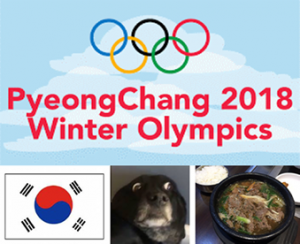 American Christians commonly eat pork and shellfish. Like the Korean dogs, American pigs are bred, kept in tight cages, and are raised to be slaughtered and served in American homes and restaurants.

Are Christians hypocrites in declaring that Koreans are wrong for eating dog meat, while they themselves consume pork and shellfish?

THE LAW OF CLEAN AND UNCLEAN CREATURES

Dogs, pigs, and shellfish are not for food or meat for human consumption…

LEVITICUS 11:27 (NKJV):
And whatever goes on its paws, among all kinds of animals that go on all fours, those are unclean to you.

EVERY MOVING THING THAT LIVES IS FOOD

GENESIS 9:3 (NKJV):
Every moving thing that lives shall be food for you. I have given you all things, even as the green herbs.

Genesis 9:3 must be read and understood in the context in which it was written. Genesis 9:3 was spoken by God to Noah, as Noah was disembarking from the ark after the great flood subsided. While on the ark, Noah and the animals aboard the ark were restricted from eating animals and ate grain only, so that the animals would be preserved.

GENESIS 6:21 (NKJV):
And you shall take for yourself of all food that is eaten, and you shall gather it to yourself; and it shall be food for you and for them.

Here is the true meaning of Genesis 9:3. Every moving thing that was food for you (clean creatures) before you got on the ark shall once again be food for you as you disembark from the ark.

On to the New Testament…

1 CORINTHIANS 10:25-30 (NKJV):
Eat whatever is sold in the meat market, asking no questions for conscience’ sake; for “the earth is the Lord’s, and all its fullness.”

If any of those who do not believe invites you to dinner, and you desire to go, eat whatever is set before you, asking no question for conscience’ sake. But if anyone says to you, “This was offered to idols,” do not eat it for the sake of the one who told you, and for conscience’ sake; for “the earth is the Lord’s, and all its fullness.” “Conscience,” I say, not your own, but that of the other. For why is my liberty judged by another man’s conscience? But if I partake with thanks, why am I evil spoken of for the food over which I give thanks?

MARK 7:18-20 (NKJV):
So He said to them, “Are you thus without understanding also? Do you not perceive that whatever enters a man from outside cannot defile him, because it does not enter his heart but his stomach, and is eliminated, thus purifying all foods?” And He said, “What comes out of a man, that defiles a man.”

Yeshua (Jesus) was commenting on eating food with unwashed hands. Eating food in this manner cannot defile a man’s character.

LET NO ONE JUDGE YOU IN FOOD OR DRINK

COLOSSIANS 2:16 (NKJV):
So let no one judge you in food or in drink, or regarding a festival or a new moon or Sabbaths…

COLOSSIANS 2:16 (NKJV):
So let no one judge you [DO NOT BE CONCERNED WITH ANYONE’S JUDGMENT] in food or in drink [GOD’S DIETARY LAWS WHICH YOU ARE FOLLOWING], or regarding a festival [GOD’S FESTIVALS – LEVITICUS 23] or a new moon* or [7TH DAY] Sabbaths…

*Christians have never observed new moon Sabbaths as part of their faith. Collosians was not written to the modern day Christian.

ACTS 10:10-14 (NKJV):
Then he became very hungry and wanted to eat; but while they made ready, he fell into a trance and saw heaven opened and an object like a great sheet bound at the four corners, descending to him and let down to the earth. In it were all kinds of four-footed animals of the earth, wild beasts, creeping things, and birds of the air. And a voice came to him, “Rise, Peter; kill and eat.”

But Peter said, “Not so, Lord! For I have never eaten anything common or unclean.”
And a voice spoke to him again the second time, “What God has cleansed you must not call common.”

Peter never did eat any unclean creature as a result of receiving his vision. As a matter of fact, no saint in the entire Bible, Old or New Testament, was ever recorded to have eaten an unclean creature.

Peter later revealed in Acts 10 what his vision really meant, what God had cleansed that Peter should not call common: the non-Jewish Gentile people of the world…

ACTS 10:28 (NKJV):
Then he said to them, “You know how unlawful it is for a Jewish man to keep company with or associate with one of another nation. But God has shown me that I should not call ANY MAN common or unclean…”

EVERY CREATURE OF GOD IS GOOD FOR FOOD

1 TIMOTHY 4:4-5 (NKJV):
For every creature of God is good and nothing to be refused if it be received with thanksgiving. For it is sanctified by the word of God and prayer.

ISAIAH 66:17 (NKJV):
“Those who sanctify themselves and purify themselves, to go to the gardens after an idol in the midst, eating swine’s flesh and the abomination and the mouse, shall be consumed together,” says YHWH (the Lord).

Isaiah 66:17 describes your typical outdoor summer BBQ pig roast at a Catholic residence, where there typically stands an idol statue of Mary in the midst of the backyard garden. Praying over unclean creatures will not make them clean. God warns that whoever eats unclean creatures will be consumed…WITH DISEASE.

Christians lead the world in acquiring cancer. It is no longer only a matter of faith to believe that unclean creatures cause illness in human beings; it has now been scientifically verified. A 2015 World Health Organization press release reported that consuming processed pork products such as bacon, pork hot dogs, and sausage causes cancer. Numerous government studies have declared the danger of eating shellfish, but rather than telling consumers to refrain from eating shellfish, governments typically instruct the public to cook shellfish well. 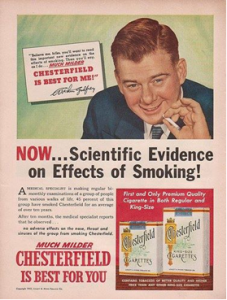 There is a certain cause and effect for things. If one fornicates with many sex partners, the consequences could be an unwanted pregnancy and / or a sexually transmitted disease. If one smokes cigarettes, that person can expect to have damaged lungs and will likely acquire lung cancer.

BUT MY GRANDMA ATE BACON FOR BREAKFAST EVERY DAY AND LIVED TO 100!

OK, but I’d bet granny was quite feeble for a good portion of her latter years. With pork, as with cigarettes, some people eat or smoke and live longer, while some get cancer early in life and die prematurely. The continued consumption of unclean creatures, be it dog, pork, or shellfish, will certainly cause a person to become feeble in old age, if that person happens to live long.

WHEN THE HEBREWS DEPARTED FROM EGYPT, THERE WERE NONE FEEBLE

PSALM 105:37 (NKJV):
He also brought them out with silver and gold, and there was none feeble among His tribes.

Imagine a whole nation, the elderly included, and no one is feeble. The good health of a nation is not exclusive to the Jews…

Before the arrival of the Europeans in America, the North American Plains Indians consumed a diet consisting of bison (a clean mammal) and vegetation. The Plains Indians typically lived to be 85 to 90 years old and never acquired cancer, heart disease, or even suffered a heart attack. It is believed that the Plains Indians, as a people, would have lived well beyond 100 years with adequate dental care. 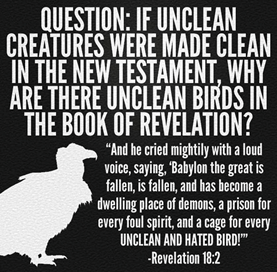 DEUTERONOMY 34:7 (NKJV):
Moses was one hundred and twenty years old when he died. His eyes were not dim nor his natural vigor diminished.

Cigarettes were once advertised as being healthy for you. The time came when the scientific evidence was so overwhelming that cigarette smoking was detrimental to a person’s overall health, that it could no longer be denied that cigarettes were harmful. The time is now here and the evidence is in about Scripturally declared unclean creatures. Human consumption of Scripturally listed unclean creatures is harmful to human health.

The human body’s cells are dying and being replaced all the time. A person can literally replace many of the bad cells of their body with healthier cells if that person eats right going forward.

GOD THE DESIGNER HAS DETERMINED PROPER DIET; CULTURE DOES NOT

If American Christians believe and proclaim that God has cleansed all creatures to be eaten as food, then they are being hypocritical and have no moral standing if they criticize the Koreans for eating dog meat.

[DISCLAIMER: The opinion in this article is the opinion of the author and is not necessarily the opinion of NewsWithViews.com, it’s employees, representatives, or other contributing writers.]