“The ruling of men is the effort to direct the individual actions of many persons toward some end. This end theoretically should be the greatest good of all, but no human group has ever reached this ideal because of ignorance and selfishness.”  [and corruption] —W. E. B. Du Bois  socialist, historian, civil rights activist, author, writer  (1868 – 1963)

“Where justice is denied, where poverty is enforced, where ignorance prevails, and where any one class is made to feel that society is an organized conspiracy to oppress, rob and degrade them, neither persons nor property will be safe.” —Frederick Douglass, social reformer, abolitionist, orator, writer, and statesman (1818 – 1895)

By now Super Tuesday is over, the results of which we did not know when we wrote this article.  Our educated guess is, Bernie Sanders has 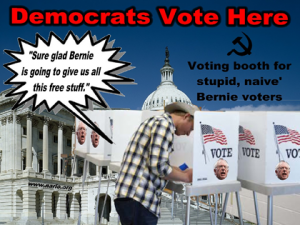 received a good portion of the delegates, with Buttigieg, Warren, Klobuchar, Steyer and Gabbard well below the 15% threshold to be viable.  Biden might still be alive after his win in South Carolina.  Steyer is already signaling he will drop out of the race.

However, anybody paying attention to the Democrat presidential candidates is well aware of Bernie Sanders’ socialist drumbeat.  Those accompanying him on this mad ride to the White House are just as bad but they don’t come right out and say they are socialists like Bernie does.  Nevertheless, they are pretty much on the same page as Bernie.  It is indicative of the extreme far left platform of the “new and improved” Democrat Party.

Here’s a list of what Bernie wants:  It should blow your mind unless you’re a socialist.

Talk about a fundamental transformation of America!  This is not even a complete list but this list is shared by most, if not all, of the current Democrat presidential candidates. Only God knows how much all of this will cost (Bernie doesn’t) but the cost far exceeds the entire American annual gross domestic product and the taxing capability of the U. S. and state governments. It would triple the annual federal budget. If the government taxed everyone’s income, capital gains and property 100%, along with a wealth tax, it still wouldn’t be enough. By the way, a wealth tax is unconstitutional on its face.

This does not take into account the massive waste, fraud, abuse and corruption that would ensue with the government managing all these programs.  No one knows how to waste taxpayer money better than the government.  In just Medicare alone, estimates of waste, fraud and abuse (improper payments for services not rendered, etc.) are as much as $50 Billion a year.  This is only one government program.

None of what we have described here answers the big question, why would any knowledgeable American vote for a candidate or a platform that would end individual freedom and property rights as we know it and destroy capitalism and the free market system, while instituting almost pure socialism?  There can only be one answer to the question, constitutional and free market illiteracy.

America’s pubic education system has failed America’s youth for at least the last three generations in a systematic, premeditated destruction of objective education that has become instead socialist, environmental and one-world global indoctrination, orchestrated by the Progressive movement, the establishment, the deep state, educators and the Democrats, over the last 10 decades.

Shamefully, only 26% of Americans can name all three branches of government, down from 38% in 2011.  But it gets worse.  Only 33% of Americans could name even one branch of government and 37% could not name one right protected by the First Amendment.  (There are five rights)

The test to become a U. S. Citizen only requires 60 percent grade to pass.  In a survey of 1,000 legal American citizens, just barely 36 percent could achieve a passing grade.  74% of senior citizens passed the citizenship test but only 20% of those under 45 could get the 60% necessary to pass.  Only 13% knew the year the Constitution was written. (1787) (Source: Forbes Magazine)

The U. S. Department of Education was established in October of 1979.  During that time it has done nothing to improve constitutional or free market literacy.  Instead we got the “Race To The Top“,  “No Child Left Behind” and “Common Core State Standards” that were the educational programs designed (by educated idiots) to allegedly increase the effectiveness of American education.  Unfortunately, these programs were more about social justice, gender, LGBTQ, race and ethnic issues than they were about objective learning.   That’s brainwashing for socialist purposes!

Earlier this year we uncovered legislation in Washington State that mandated the teaching of the U. S. and State Constitutions and the American form of government in various grades, from elementary through high school.  A worthy goal it seemed.  However, in digging deeper we discovered that this law was not exclusive to Washington State, but was being mandated by legislation originated in 1994 by the U. S. Congress.  We were aghast to learn that what they were teaching with their universal text books from this legislation, that America was not a Constitutional Republic, but a Constitutional Democracy.  The differences are night and day.  We must “Get Progressive Educated Idiots Out of Education.”

Now the State of Washington is about to pass a law this year to teach sex education to kindergarterners.  So littly five-year old Johnnies and Jennies can learn about multiple genders and sexual proclivities, abnormalities and deviations, rather than learning that Mother Nature created two sexes, a man and a woman.  Yes, gene mutations and genetic errors do create some physical variations.  Nevertheless, any deviation from the two-gender reality is fake news, even though Facebook is trying to tell us that by some trick of nature there are 58 genders.  And you wonder why little Johnny is confused about his sexual orientation?

Anyone with the least amount of intellect knows full well that a five-year old (or even a 10-year old) has no point of reference to understand the sexual antics of humans, much less an egg and a sperm, or how they come together to create human life.  To teach sex education or sexual deviancy at this grade level is not only ill advised, it is grossly negligent, if not bordering on the criminal.  This is being pushed by the LGBTQ community and the Democrats and is, in effect, institutional, sexual brainwashing.  But we digress.

The word “Democracy” does not appear anywhere in the Declaration of Independence, or the U. S. Constitution, or in any of the state constitutions.  The Founders knew what a Democracy meant, which is majority (mob) rule, so they set up a Constitutional Republic, which is government under the rule of law where the minority is protected from a potentially deranged majority.  The U. S. Constitution was to be and still is, the Supreme Law of the Land and it was to be and is the foundation of all law in America.  That foundation was based on the unalienable, God-given rights of the individual and it was government’s duty to preserve, protect and defend those rights.  It has criminally sherked that duty.

But alas, as in all persons of power, there is an overwhelming urge to increase their political power. The limitations of the U. S. Constitution were a definite impediment to an increase in power.  So the politicians from President Wilson on up to and including Obama, started re-defining its phrases and meanings to their own ends and for their own gain. FDR was one of the worst.  He attempted to create rights that don’t exist under the Constitution.  Bernie is doing the same thing.

How best to circumvent the constitutional limitations than by convincing the people that government would provide for them in their every day lives, or in times of emergencies.  Meanwhile, the people, by ignorance and in-action, allowed history, once again, to repeat itself.  Another Republic, in a long line of Republics, became a socialist, Absolute Democrat Monarchy in just a hundred years.  It can only lead to CIVIL WAR ….. again!

In furtherance of the destruction of the Supreme Law of the Land, politicians agreed to the appointments of liberal justices (until Trump) who would interpret the constitution, not as the Founders had created it, but by twisting the words in the Constitution to fit a particular social or radical environmental agenda.  They did so by perveting and then expanding the original meaning of the “Commerce“, “Necessary and Proper” and the “Promote the General Welfare” clauses in the Constitution.

These same supreme court justices, over the last 80 to 100 years, have perverted the meanings of the first ten amendments, the foundation of our unalienable rights, thereby diluting those rights.  Through environmental legislation (Agenda 21) passed by the U. S. Congress and sanctioned by the U. S. Supreme Court, laws, bearing absolutely no resemblance to constitutional authority, have been added to the law of the land such that property rights have been rendered virtually non-existent.  Landowners have been relegated to unwilling serfs of an all-powerful, unrelenting, environmentally crazed government.  Laws with a particular social agenda, have been created in much the same manner.

It boils down to that a majority of Americans know hardly anything about the U. S. Constitution, nor do they care to know.  They know even less about how the free market works and why it is so vitally necessary to the workings of a free society.  That is a complete failure and a breakdown of the public education system in America as well as gross parental negligence.  Is it any wonder that millennials are going for Bernie Sanders, or all of the other socialist presidential candidates, by the millions?

So don’t blame Bernie.  Blame the ignorant dolts that vote for him.  Blame the politicians and the educators that implemented institutional socialist brainwashing in our public schools and allowed constitutional and free market ignorance to prevail ….. on purpose!

Man on earth is indeed at the top of the food chain on this third rock from the Sun.  He has no natural enemies or predators that prey upon him except himself.  His only real threatening enemies are the earth, deadly viruses and bacterium ….. and Socialist Democrats like Bernie Sanders and the voters that vote for him!