“Creation destroys as it goes, throws down one tree for the rise of another.  But ideal mankind would abolish death, multiply itself million upon million, rear up city upon city, save every parasite alive, until the accumulation of mere existence is swollen to a horror.”  —D. H. Lawrence, English Writer (1885 – 1930)

Most of us know by now that the Coronavirus erupted in Wujan, China, a VERY LARGE city of 11 million people, sometime in November of 2019.  Allegedly, the outbreak was supposed to have occurred in the Wujan Huanan Seafood Wholesale Market.  However, there has been much debate as to whether the virus was accidentally released from a bio lab in the vicinity.  We may never know the true origin of the virus.

China, being essentially a dictatorship, immediately locked down over 50 million people in several large cities in the Hubei province.  They built two dedicated hospitals in a little over a week.  One public health expert was reported to have said that, “China has rolled out perhaps the most ambitions, agile and aggressive disease control effort in history.”

Their aggressive efforts have paid off and China now appears to have past the apex of the virus, as new cases have slowed throughout the country.  Not so the rest of the world.

The Bubonic Plague (black death, 1347 to 1351) killed an estimated 25 million people in Europe.  At first, the parasite that caused the 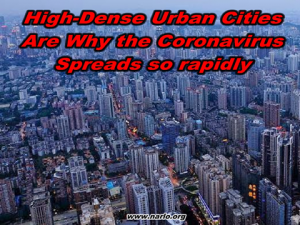 deaths, was spread by fleas and ticks, carried by rats that infected humans.  However, it is now believed that most of the deaths came from human-to-human contact, predominantly in LARGE CITIES due to overcrowding and poor sanitation conditions.  Human beings became the carriers of the disease because humans were also carrying the fleas and the ticks.

The Coronavirus has struck the city of New York, a VERY BIG INTERNATIONAL CITY of 8.6 million people.  New Yorkers live very close together and millions of foreigners visit New York City every day from all around the world, foreigners that are carrying the Coronaviurs.  That the virus is pandemic in New York and that hospitals are being overwhelmed should come as no surprise to anyone.  After all, at the beginning of the outbreak, health officials and politicians were telling New Yorkers that there was very little danger from the virus and to go about their business as usual.  That turned out to be very bad advice.

It is estimated that over 430,000 Americans repatriated from China at the peak of the outbreak, many of them carriers of the disease.  Those “potential” carriers spread throughout America with the devastating results we are now observing.

The point here is that big cities become epicenters for the outbreak of any major disease, no matter upon which continent the city exists.  Because of massive international air travel, any disease spreads across the globe at un-imaginary speeds, from east to west and west to east.  The fact is, big cities are hazardous to people’s health and welfare.

The behavior of people living tightly in big cities produces its own share of problems.  High crime rates and noise, air and water pollution are just a few of the consequences.  Big cities require large police forces to enforce laws and civility.  Big cities dump their concentrated pollution on the environment and then expect everyone else to comply with environmental protection, except them selves.

Big cities are also dangerous places to be in times of war and natural disasters.  Earthquakes, fires, floods and rapidly spreading diseases find ready victims in big cities that can produce large losses of life.   The Earthquake and resulting fire in San Francisco (1906) and the Great Chicago Fire (1871) are two prime examples.

Most of the deaths occurring from the Black Plague, during the era of the Dark Ages, occurred in the largest cities where the concentrated garbage and poor sanitation attracted the rats that carried the fleas that carried the disease.

During war, opposing enemies don’t bomb the countryside, they bomb big cities where the manufacturing plants build the machines and weapons of war and where large populations of men, women and children can be killed to bring the enemy to its knees.  Need we mention Hiroshima, Nagasaki and the firebombing of Dresden, Germany in World War 2?  Just imagine the loss of life in big cities around the world if nuclear war erupted across the planet.  Not even God could help us then.

Man’s need to congregate and associate can sometimes work to his detriment.

But the other consequence of high-dense living is the steady lowering of the bar of civility, respect and trust.  Human behavior changes under the conditions of living closer together.  It does so because of a basic human fact.  No matter what the government, socialists, or the environmentalists will tell you, people like and need “their” space and the space does not come in a 1,000 sq. ft. apartment in a 25-story building, surrounded by concrete on all sides, in a big city.  Suburbs became a partial answer to the human need for space.  But then the suburbs began to increase in density as governments got into the act of “planning” where we live and work.

Increasing city densities is one of the desired policies under UN’s Agenda 21 and all environmentalists.

As government increases its power over the people through quarantines and massive bailouts, the people become wards of a massive government apparatus from which there is no escape.  All Americans now owe their very lives and livelihood to this potentially corrupt, wasteful, inefficient and abusive apparatus.

Big government loves big cities, as they feed off of the occupants’ dependence on government and big-city voters continue to re-elect the handout providers.  Big government doesn’t give one whit about civility.  If the population gets more uncivil, government just adds police to bring the people into compliance and increases taxes to pay for it all.  Like too many rats in a cage, the populations of big cities will get less and less civil as their densities increase and will become more and more dependent on government for their survival.  Big cities produced big government and government gets bigger and more powerful every day.  In the end civility, respect, trust, honor, integrity, honesty and freedom lose.

It is without a doubt that Trump had nothing to do with the Coronavirus outbreak and is doing everything within his power to save as many American lives as possible with the policies he and the Congress have authorized.  He has surrounded himself with highly credentialed experts and people willing to go the distance to stop the spread of the virus without sending the economy into a non-recoverable depression.  It is a balancing act that might win but could also have disastrous consequences if those policies turn out to be wrong.

What the Trump Administration and the Congress are doing is a little like administering Chemo Therapy to a cancer patient.  The hope is the Chemo Therapy will kill the cancer, before it kills the patient.  It is a high stakes, high-risk poker game where no one knows the outcome and it is mostly necessary to save the giant populations of high-dense, over-populated urban cities, like New York City.

In contrast, Seth Low, 23rd Mayor of Brooklyn, New York and President of Columbia University (1850 to 1916) had a different take on big cities.  He was reported to have said:  “The great city can teach something that no university by itself can altogether impart: a vivid sense of the largeness of human brotherhood, a vivid sense of man’s increasing obligation to man; a vivid sense of our absolute dependence on one another.”

Author Ayn Rand had a different take on man’s obligation to man:  She said, “Man – every man (and woman) is an end in himself, not a means to the end of others; he must live for his own sake, neither sacrificing himself to others nor sacrificing others to himself; he must work for his rational self-interest, with the achievement of his own happiness as the highest moral purpose for his life.”

Both can’t be right.  Low’s description of big cities seems to have a touch of socialism in it.  Ayn Rand’s definition is harsh and perhaps selfish, but is more aligned with individual freedom and unalienable rights.  You decide.

Nevertheless, humans are stuck with big cities no matter how detrimental to their lives that might be.