Home/April 2018, Opinions/Double Standard In Republican Hierarchy, One For Obama, Another For Trump

Double Standard In Republican Hierarchy, One For Obama, Another For Trump

What if I told you the left wing and the right wing belong to the same bird. —Anonymous

I believe in less government.  I believe in fiscal responsibility and all those things that maybe republicans used to believe in but don’t anymore.  —Clint Eastwood

Yes, the left wing and the right wing both belong to the same bird, and that bird is the destruction of the land of the free and the home of the brave.

Not once during the entire reign of the socialist Muslim loving, race baiting presidency of Barack Hussein Obama did the Congress balk at what Obama wanted, neither did they delay his appointments, unlike what the Republican Senate has done to their own Republican President.  Obama loved spending, and so does the Republican Congress. 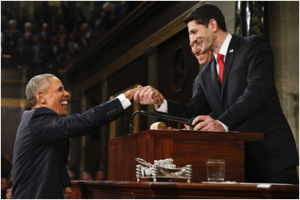 Obama and others before him loved Omnibus Bills because they could use these monies in ways to promote their own agendas.

As previously explained an omnibus bill is a single document that is accepted in a single vote by a legislature, but it packages together several measures into one or combines diverse subjects. Because of their large size and scope, omnibus bills limit opportunities for debate and scrutiny, which we’ve just seen. This is part of the rot of an omnibus bill as compared to a budget.

An omnibus bill mixes mandatory spending and discretionary spending. So, does the President have the ability to use the funds as he chooses? Yes, to a point. President Trump was not happy with the Omnibus Spending Bill of 2018 and voiced his displeasure up until he actually signed it at the last minute.  He can’t take money from the Jordan Wall, (why the hell are we building a wall for Jordan?) for example to make his own wall, depending on where those monies are appropriated. But within the budget there are likely places where he can adjust the way the monies are spent, and that includes the military building the wall.  Link

That wall our President wants protects American citizens from criminal illegal aliens and terrorists entering our country as freely as they do now.  And it’s not 11 or 12 million illegals who have crossed our borders, it’s more like 60 million, replacing the aborted American citizen babies murdered in their mothers’ wombs.

Presidents can use their influence over any items that have been appropriated, depending on the agencies involved. Obama used his to influence spending in agencies that were advancing his agenda.  There is little information to tell us how appropriated money is actually spent, and in eight years we never found out what Obama did with the monies in his Omnibus bills, did we?!  Link

Now we have a Republican president who loves this country and wants to keep her citizens protected and safe and these leftist socialist Republican rags (neo-con Trotskyites – Trotsky was a Marxist who murdered 3 million Russian citizens) are willing to thwart what they know Trump could do with the omnibus bill.

Impoundment is an act by a President of the United States of not spending money that has been appropriated by the U.S. Congress. Thomas Jefferson was the first president to exercise the power of impoundment in 1801.  The power was available to all presidents up to and including Richard Nixon, and was regarded as a power inherent to the office.

Citing government spending as a reason for surging inflation, Nixon refused to spend nearly $12 billion of congressionally appropriated funds for 1973 and 1974. He claimed that the deficit was causing high inflation and that as a result he needed to curb government spending.

Nixon did so under the executive action known as “impoundment.” Faced with Nixon’s unusually large impoundment, and with the president bogged down in Watergate, Congress rebelled, passing legislation to make impoundment illegal. Nixon vetoed the bill, Congress overrode his veto, and Nixon stood his ground. The administration challenged the new law barring impoundment, but a federal court sided with Congress, saying impoundment was unconstitutional.

The 1974 Congressional Budget and Impoundment Control Act modified the role of Congress in the federal budgetary process. It created standing budget committees in both the House and the Senate, established the Congressional Budget Office, and moved the beginning of the fiscal year from July 1 to October 1, once again the bureaucracy in increased…thanks to Congress.

The Act had two main goals: (1) strengthen and centralize Congress’ budget authority; (2) reduce the President’s impoundment authority. The latter was done by drafting detailed guidelines restricting how the President can impound funds already appropriated by Congress.

The Impoundment Control Act of 1974 provides that the president may propose rescission of specific funds, but that rescission must be approved by both the House and Senate within 45 days.  Congress can approve the rescissions with a simple majority vote, no clotures, no filibusters.  However, the requirement removed the Presidential impoundment power, since Congress is not required to vote on the rescission and, they have ignored the vast majority of presidential requests.

Congress doesn’t mind the practice as long as its use is fairly trivial. But if a president actually uses it in big enough chunks to make a difference, they go nuts.

Barack Hussein Obama, aka Barry Soetoro never saw an omnibus spending bill he didn’t like.  We know that because the debt doubled.  George Bush never used impoundment, whereas Reagan used the act several times.  Nevertheless, even with over $75 billion being requested, Congress only agreed to $25 billion in cuts.  Can you see who the unconstitutional spenders are…both Republican and Democrat? 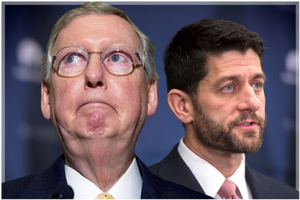 With a Republican majority in both houses of Congress, our Republican President could request that McConnell and Ryan impound all of the Democratic wish list in the 2018 Omnibus bill, but the reality is they were just as pleased with this outrageous bipartisan leftist spending as Schumer and Pelosi.

Mitch McConnell, the “leader” of the Senate has failed to support his own party’s president, and has waffled on everything the President requests, and is even allowing speculation about a bill to keep the President from firing Mueller.  Now he has even killed President Trump’s plan to cut $60 billion in spending…a pittance, and McConnell won’t even allow that.  What a traitor.

Then there’s Speaker of the House, turncoat Paul Ryan hoping to push amnesty for illegal alien law breakers through the house before he leaves in nine months, and he won’t leave now…why?  Because this moderate leftist Republican wants to do as much damage as possible before he exits to run for President.

Top it all off with Vice President Pence’s lack of personal loyalty to the President.  Pence actually hired Nikki Haley’s deputy Jon Lerner, a virulent anti-Trumper.  Lerner crafted brutal attack ads for David McIntosh’s pro-amnesty Club for Growth’s multimillion-dollar anti-Trump blitz during the Republican primaries.  Remember that Nikki Haley is another neo-con, but fortunately has done as her boss directed in her position as UN Ambassador, unlike other Trump appointees.

Chief of Staff John Kelly told colleagues that Pence’s chief of staff Nick Ayers, who orchestrated the appointment, had not “fully informed” him of Lerner’s anti-Trump history. Ayers and Lerner have worked together in the past for Haley, among other campaigns. Trump tried to put the kibosh on this appointment, but then Pence spoke with him and Trump relented.

The swamp our President works in is filled with an over abundance of poisonous and vicious snakes.  Republicans have been just as divisive and antagonistic to our President’s campaign promises as have the Democrats.  Truly, they are false friends and how obvious does it need to be for Trump supporters to see that they’re part of the same globalist agenda as the left.

Who is advising our President to choose people for his administration from the swamp?  Why is he not seeking credentialed people from the heartland who supported and worked for him throughout his campaign?  This is what troubles so many of us.  How we wish that a few of us could get an hour of his time and send him toward valuable people who would help him gain even greater achievements.

Pray for Mr. Trump and his family and pray for his protection.  We really need to pray against the fiery darts of the evil ones because there are many, especially in the swamp.

P.S. Please consider donating to NewsWithViews.  Our CEO, Paul Walter works daily not just on this website but throughout his community to save our beloved country from communist takeover.  Why?  Because he escaped, just like President Trump’s beautiful wife Melania, from communist Slovenia years ago.  America is the last bastion of hope for freedom.  There is nowhere else to run to.  Please consider donating funds to NewsWithViews monthly.  Thank you and tell your friends to sign up for daily emails from this conservative website.