Sometimes I wonder why I am so restless, why I cannot cease thinking! It seems like the world we live in reveals to us incessantly, at certain moments or in certain circumstances, just how little we are and how vast the universe is. This world of ours is very complex. The world we live in is a world of many brutal voices. It is a world of heavy blows and delirious trances, but it is the only world that we know. 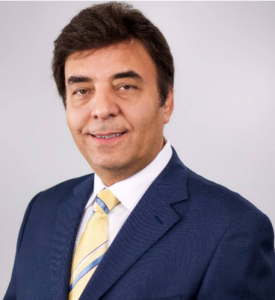 Everyone knows that life is too short and no one lives forever. We all know that the situation in Iran is dire and at any moment this brutal regime could collapse. Although, Iran is saturated with great minds and leaders who could navigate the ship to safety, as they have done for the past 2,500 years, society invents its own heroes who will rise to the occasion. Heroes appear when circumstances call upon them. Heroes are those extraordinary people who make sacrifices and become agents of historical and social change.

Neither President Trump, nor Dr. Foroutan were obligated to engage, endanger and inconvenience their lives. But, they both were destined to be the agents of change. It would be fantastic to see a meeting between these two men, a landmark step towards regime change in Iran.  For those who have not heard of this brave son of Iran, it is time for you to get to know him. He has the support of many Iranians both in Iran and abroad.

Dr. Iman Foroutan is my longtime friend and an Iranian patriot who has selflessly dedicated his life to free his beloved homeland from the hands of tyrannical butchers: The Mullahs of Iran. For the past twenty-one years, each and every day, Iman has labored tirelessly, with utmost courage, and integrity in the defense of liberty, freedom and for the rights of Iranians inside Iran. He hopes more and more people will join him in this powerful movement to end the rule of the Islamic regime.

Tyranny is tyranny despite its form and recognizes no borders. It does not confine itself to any geographic area. It is by nature aggressively expansive and invasive. As President Trump has repeatedly pointed out, appeasing tyrants invariably fails to satisfy them and only serves to whet their appetite.

Iman with his calm and sweet manner, witty and intelligent mind, has taken it upon himself to end the brutal regime of Iran with their barbaric practices which includes the abuse of women in all ways, prostitution, child sex-trafficking, forced child brides, severe abuse of homosexuals, and much more under Stone Age Sharia law.

Dr. Foroutan upholds and defends the ideals of human rights. Like many past heroes of Persian history, such as Kaveh Ahangar, Babak Khoramdin and many more, this inestimable man also has risen to the occasion in the defense of his beloved homeland and her people. The least we can do is to stand with him and support him in this lofty goal that Almighty God has placed upon his shoulders.

I know that I speak for millions of desperate Iranians both in and out of Iran who need our help now more than ever. Iman has a proven record and is a true friend of freedom. He stands with the people of Iran in their life and death struggles. We should all thank Iman for his work and activism and continue to support him.

Knowing the seriousness and determination of the regime in Iran in the destruction of its heritage and pre-Islamic culture, Iman singlehandedly went to work and invented an invaluable software tool that connects all Iranians together.  The New Iran (“TNI”), aka “Nahade Mardomi” which in Persian translates to People’s Foundation, a not-for-profit grassroots organization birthed by Dr. Iman Foroutan has become a powerful tool to unite all Iranians around the world.

Iranians of all aspects of life, no matter where they are, will stand with Iman and wish to express their undying gratitude to choose a difficult path.

President Donald Trump has a historic mission to redeem a flawed policy followed by his predecessor, President Obama. In 2009, people in the streets of Tehran were chanting, “Obama are you with us or with them?” “Regrettably, President Obama stayed with the mullahs, which emboldened them to massacre the protesters.” said Dr. Foroutan.

“My fellow secularist Iranians and I have indeed done, and continue to do, what we can to help our compatriots in Iran, who are on the front line fighting the Islamic Regime. It is regrettable that we do not have enough material to substantially contribute to equip the resistance with further means of communications and information dissemination.

Dr. Foroutan continues, “In my opinion, the best strategy that stands the greatest chance of success and entails the least risk to start a cataclysmic chain reaction for a “coalition of the willing,” to borrow a phrase, to rally behind the Iranian opposition. It is the democracy-seeking secular Iranians who are thoroughly capable of dislodging the tyrannical Mullahs. The call of the opposition should be resoundingly answered by President Trump and all other nations and leaders, not only for humanitarian reasons, but in furtherance of their own national interests.”

Let us be reminded that we have invaluable allies on the ground in Iran. There are some 50 million Iranians who are the best hope of the world in that part of the world. These enlightened Iranians despise the Mullahs and have no animosity toward Israel or the United States. Most of these people are well-educated and smart and have broken away from the slavery and fraud of Islamism. They are in the best position to send the Mullahs packing for good. Instead of throwing a lifeline to the sinking ship of the Mullahcracy, we must act resolutely in doing everything non-violent to help them defeat the Mullahs. It is our best hope.