The Lord is not slack concerning his promise, as some men count slackness; but is longsuffering to us-ward, not willing that any should perish, but that all should come to repentance. —II Peter 3:9

Christians are tired of having their beliefs and faith trampled.  Bakers and florists have lost their businesses because of militant gays who wish them destroyed for refusing to make cakes or floral arrangements for same sex weddings.  It should be the business owner’s prerogative in America to refuse. Unfortunately, political correctness and liberal courts have many times overridden the rights of those whose Christian beliefs take precedence in their lives.

It’s much the same for our Jewish brethren who have survived this hatred for centuries. Today however, the hatred is more obvious, and many Christians have asked why they are targeted, when it is perfectly okay for Muslim businesses to turn away same sex couples.

The recent Colorado court case against talented baker Jack Phillips was not about his ability to turn away same sex couples requesting a wedding cake but was a 7-2 decision regarding the Colorado Civil Rights Commission and their hostility towards Phillips’ Christian faith.  Phillips has no problem baking cakes of any kind, it is what the customer wants on the cake that deters him.  He explained on the Fox Business Stuart Varney Show that he will not bake cakes about Halloween, he will not bake cakes against America or our military, and he will not bake cakes that attack LGBT (Lesbian, Gay, Bisexual, Transgender).  He also believes he has the right to refuse to bake wedding cakes for same sex couples, yet many gays shop in his store and he has absolutely no problem with that.  Here is the entire Supreme Court decision. 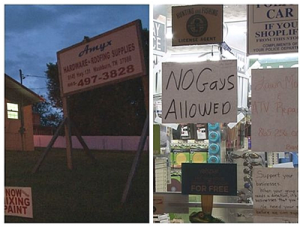 “They gladly stand for what they believe in, why can’t I? They believe their way is right, I believe it’s wrong, but yet I’m going to take more persecution than them because I’m standing for what I believe in,” Amyx said.

Amyx actually removed the “No Gays allowed” sign and replaced it with a sign that says: “We reserve the right to refuse service to anyone who would violate our rights of freedom of speech and freedom of religion.” 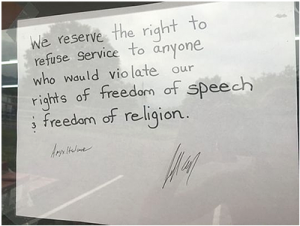 Okay, I’ll go with that…however, this man is a Baptist minister.  Instead of putting up either sign, why not have one on the door that says, “Lost and Hurting?  C’mon in and let us share our faith.”  Isn’t that what a man of the cloth is supposed to do?

God tells us he wants none to perish.  Romans 3:23 says, “For all have sinned and fall short of the glory of God.”  None of us are without sin, nope, not a one.

In John 8:1-11, is a story involving the scribes and Pharisees who, in their continuing efforts to trick Jesus into saying something they could hold against Him, brought to Him a woman caught in adultery. They reminded Him that the Mosaic Law demanded her to be stoned to death. “But what do you say?” they asked Him. At this point, Jesus stooped down and starting writing something in the dirt. When He straightened up, He said, “He that is without sin among you, let him first cast a stone at her.”  Then He stooped down and wrote again.

We do not know what Jesus wrote, but after He wrote a second time, the Jews left one by one, from the oldest to the youngest, without saying another word. Jesus then set the woman free telling her to her to sin no more.

We cannot accuse others unless we first thoroughly search our own hearts and minds to make certain that we are pure in every possible aspect (Matthew 7:3). Also, if we must admonish someone, we should do so as instructed in Scripture; we always look to God’s glory and never cause unnecessary division or harm (Matthew 18:15).

Take the story of Pastor Jack Morlan. He was radically saved out of a homosexual lifestyle by Jesus Christ. He and his wife, and their two sons boldly proclaim a Gospel of Salvation. Jack’s ministry was treated very badly during the 1990s by the Christian Right leaders, who told him frankly that they found much more enjoyment in bashing gays, and that they made much more money attacking gays in their fundraisers. They informed Jack that they didn’t want to share the Gospel with homosexuals. But pointing a finger and screaming “Sinner” wins no one to the Lord.  Quite obviously money was more important to them than saving the lost.

The word GAY is an acronym for “Good as You.” That alone speaks volumes. Some will never change, but others are desperately hurting and true Christian love could save them just as it saved Pastor Jack.

Militant gays can be dangerous and frightening, and they can destroy a business.  I’m not saying that we should discard our beliefs to protect ourselves from lawsuits and even damages to our properties, but Jack Morlen came to saving grace because a Christian loved him enough to show him the truth of God’s Word.

“But I say unto you, love your enemies, bless them that curse you, do good to them that hate you, and pray for them which despitefully use you, and persecute you.” Matthew 5:44.

NewsWithViews comes into your mailbox every day.  The variety of writers is amazing, all with subject matter they’ve delved into and researched for our readers.  The CEO of NewsWithViews makes sure there are new articles every morning.  Keeping a website of this size up and running is not only a lot of work, but it is costly.  NewsWithViews exists because of donations from our readers.  We thank you and ask for your continued monthly support.  Tell your friends to sign up for the daily emails.  You can donate here.