TCP News  —How far the world has fallen.  Nothing is any longer off limits or taboo so it would seem.  An 8-year-old revealed on social media that she is dating a 13-year-old – with her mom’s blessing.  Both are so-called influencers on social media. 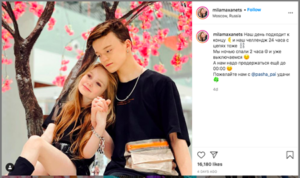 This 8-year-old girl is a model, and already has almost 500,000 followers on Instagram.  Apparently her mother is more than a little permissive.  Mom is apparently fine with her daughter dating a 13-year-old.

From The Gateway Pundit:

“After facing a wave of backlash over the seemingly clear abuse of her child, the mother wrote on her personal account ‘this is their life, and they will figure it out on their own.’”

The 8-year-old girl, Milana Makhanets, is popular among kids and has millions of followers on a Singaporean social media site.

“A scandal has erupted in Ukraine after it was revealed that an eight-year-old blogger with millions of followers is dating a 13-year-old boy, with the complete blessing of her mother, who controls all her social media accounts.

Here is our question: why is everyone seemingly solely focused on the girl?  What about the 13-year-old boy?  What about his parents?  No 13-year-old should be dating, and this child should surely not be “dating” an 8-year-old girl.

It is truly tragic that parents would pimp their own children out to make money.

Another post, from a lawyer named Anna Malyar, claimed that Milana’s “mother made a seductive woman out of an eight-year-old girl for perverts.”