A president is VOTED into office by the people, for the people and of the people. The job of a president is to make the decisions that affect Americans. His word is law and possesses Executive Order Privilege to overturn a bad law or institute a new one.

So how did judges obtain a seat in the Oval Office to dictate what guidelines are to rule our country? They pushed their way in that’s how.

For example, President Trump rightfully placed a travel ban against all Muslims wanting to enter the U.S. based upon the numerous violent attacks, murders and rapes committed by Muslims in America and every other country they managed to get in and trash. 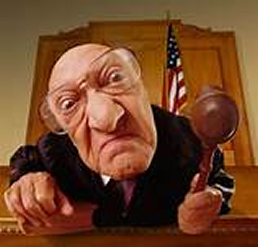 However, Derrick Kahola Watson of Hawaii was put in place in 2013 as U.S. Federal Judge…by….you guessed it….OBAMA! Now it is all making sense, since Obama thinks he is still president with George Soros guiding him.

Judge Watson illegally overturned an Executive Order from the elected President of the United States proclaiming the ban null and void. How’s that again?

Federal Judge James Robart of Seattle filed a suit of his own to stop the ban, since, as both judges regurgitated; this defies the Freedom of Religion clause guaranteed by the U.S. Constitution.

REALLY? First of all, illegals in the U.S. have no constitutional privileges. Get that? Second of all, Islam is NOT a religion. It has nothing similar to legitimate religions.You will not see one reference to “love” in their “Holy Book.”

Read the Koran for yourselves which condones murder, violence lying and proclaims it is right to rape children. Again, read it for yourselves.

Since when do judges have more power than a constitutionally elected president?   THEY DON’T. This is a textbook coup d’etat in the making, concocted by democrat communists who totally skirt the law.

Appointed judges do not overrule a president’s decision or make decisions affecting the country they lead, period. Only the president can make such decisions. Let’s get that straight. Judges are APPOINTED by a president, a president is ELECTED by the people. This is a big difference.

The elected President of the United States has the authority to present a bill of his choosing to Congress. It is congress who passes or rejects a bill, not an appointed judge, who may come in with biases which is clearly demonstrated in this current series of events.

And how about this business of Democrat Communists holding for ransom a bill that the president wants to pass? This means refusing to pass a bill unless the president includes the passing of a bill that the dems want passed such as this last fiasco which resulted in the Schumer Government Shutdown?

Schumer refused to let President Trump’s bill pass unless Trump also passed a DACA bill allowing over 800,000 immigrants to live in America or stay in America with all benefits; welfare, health care, housing, phones food stamps etc that is paid for by taxpayers, us, i.e. “distributing the wealth.” Doesn’t that sound familiar?

So why is Schumer so insistent upon allowing almost a million new immigrants to live in America? Simple. Think about it. These immigrants will absolutely vote democrat for any election, especially these critical 2018 elections.This cannot be allowed to happen.

A bill is a bill….one bill…without any other bill attached to it. How have we allowed this to happen? It is time to put a stop to it. There needs to be further draining of this swamp that at this point, even the alligators can’t tolerate.