DANIEL 12:4 (NKJV):
“But you, Daniel, shut up the words, and seal the book until the time of  the end; many shall run to and fro, and knowledge shall increase.”

As a young child, one of my life goals was to decipher all of Scripture prophecy and articulate it in plain, easy to understand English. I believe I have achieved that goal and am hereby presenting the fruit of my efforts and studies.

For one to proclaim to have figured out all of the major details of the world’s greatest mystery, Scripture’s end times prophecies, and be able to present it in an easy to understand video and storyline, is undoubtedly a bold statement that should not be readily accepted. 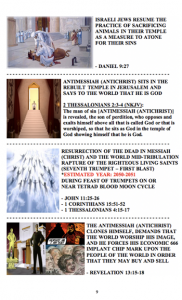 It has taken all of my police officer investigative experience, coupled with my world travels – including travel to Israel, life experiences, countless hours of study, painstaking meticulous interpretations, numerous revisions, and divine revelations from the Holy Spirit to put the whole end times storyline together. Where other theologians have fallen short, I have plugged the gaps with problem solving solutions along with some alternative viewpoint understandings of Scripture prophecy.

Many may read this and be rightly initially skeptical, as mankind has not had a great track record of deciphering Scripture prophecy. Many before me have made similar bold claims and misled many with false dates of the return of Messiah (Christ) and other events such as predicting rapture dates. There are some places where I predict approximate years, but not specific dates, for events to occur.

In my video and article, you will hear prophecy revelations that have never been proclaimed before, because these revelations are exclusive to me and have not been presented by any other theologian on Earth, that I am aware of.

One of News With Views’ stated aims is to declare “America is the light on top of the hill and the hope for the world. Without America, the world will plunge into darkness with no hope.”

Without America, the world will indeed plunge into darkness. Even so, we are increasingly seeing a different America emerge, an America that has forgotten its Judeo-Christian heritage. There is short term hope in the presidency of Donald Trump, but America’s counter-culture is not going anywhere and is poised to become America’s main culture in the decades ahead. Donald Trump will not be America’s president forever. 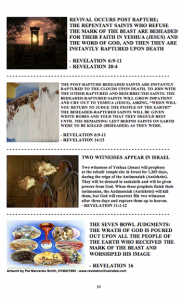 I am an American patriot and a supporter of the State of Israel. My presentation of the end times MUST put away any personal biases, likes or dislikes, and rightly proclaim biblical prophecy through what Scripture declares.

These are some of the things you will be presented with:

You will be presented with America’s prophesied ultimate destiny, the event that begins the great tribulation, which causes many nations and kingdoms to war with other nations and kingdoms, the global economic collapse, world famine, the fate of America’s righteous saints, and the plight of the immoral people in America. Article link, Video link.

SIDE NOTE:
It was only after the Scripture prophecy of Revelation 9:1-11 was fulfilled, which I identified – and apparently no one else in the world has, that all the other prophecy riddles fell into place for me and I was able to piece together the puzzle and solve all the prophecy mysteries of the end times.

You will be presented with two blasts of the 7th trumpet. Many prophecy watchers argue over a seeming contradiction of Scripture prophecy: the last (7th) trumpet. Rapture deniers proclaim that every eye will see Him at the last trumpet, so they dismiss the 7th trumpet Scripture verses which proclaim He will come as a thief in the night

No theologian, that I know of, has ever or is proclaiming what I am declaring:  there will be two blasts of the last trumpet.

Many theologians have attempted to fit Scripture prophecy onto a timeline graph, with uncommon terms such as “the time of Jacob’s trouble,” which is a term that is uncommon to a non-scholar believer. The end times prophecies cannot fit on a timeline graph, and my approach of making an easy to follow storyline works much better.

I do not use uncommon terms in describing the end times events.

Nothing divides the faithful more than Scripture prophecy. Many have preconceived beliefs while others have cognitive dissonance altering their perception of the end times events. This presentation is not meant to purely alarm people to what is coming, but to prepare a people to be ready for what is coming, and for people to be hopeful for the promises of Scripture prophecy, which is mankind’s future glorious destiny with God.

Understanding Scripture prophecy is for the wise; the wicked does not understand prophecy, nor heed the warnings of Scripture to repent.

Without any further preview commentary, here is my presentation on the End Times Scripture Prophecy Revealed.