Face It, Can American Freedom Be Saved Peacefully?

In 1861 it was state’s rights and slavery that brought two American factions (north vs. south) to the boiling point that resulted in open warfare.  Over 600,000 people died in that war and untold soldiers and civilians were injured and scarred for life.  There were a little over 30,000,000 people in the U. S. at that time, according to the Census Bureau.  Today, the estimates are over 327,000,000 people, or 10 times the 1860 population.

Now in 2019, Americans are hopelessly divided and brought to the brink of war, even as unspeakable as that eventuality would be.  But the war has been brewing for well over 100 years with the rise of Progressivism in the late 1800’s.

Many detrimental events led up to where we are today.  Progressives gave us the 16th Amendment, which spawned the Federal Reserve, which is a private organization and is neither federal nor a reserve.  They gave us the Internal Revenue Service, which violated three sections of the U. S. Constitution about taxes being apportioned not directly applied to income.  This made every American a debt servant to the government.  Today, every single American, man, woman and child, now owes over $67,000 to the federal government …. and rising.  Government did this to YOU!  Why aren’t you MAD!

FDR added a whole bunch of other Progressive violations of the Constitution with Social Security and the New Deal legislation.  The New Deal brought with it the WPA relief program, which made the federal government the largest single employer in America (paid for by taxpayers) and several farm subsidy programs that still exist today.  FDR’s Social Security and the New Deal would set America on a socialism train that cannot be stopped until it derails on the impossible steep curve of “no more money.” 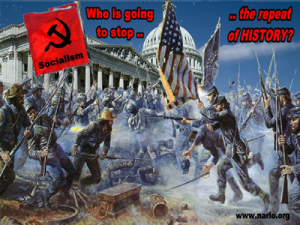 It didn’t stop with Democrat FDR.  Then came Democrat President Johnson’s Great Society in 1964-65 with its main goal being the elimination of poverty and racial injustice.  It did neither.  Although the poverty rate has remained fairly steady at around 15%, it is costing American taxpayers enormous percentages of the Gross Domestic Product (GPD).  In fiscal year 2016, total welfare payments amounted to $3.9 Trillion, or 21% of America’s GDP.  Has racial injustice improved?  That depends on to whom you are talking.

In the late 1960’s along came the vise grip of environmental protection that has so squeezed the American rural landowner, farming, ranching and owning land of any kind have become so restricted as to render property rights all but extinct.  It has also raised the cost of every product in America by significant percentages.  The massive rise in environmental protection then spawned the most evilly conceived planet-wide con game under the guise of man-caused global warming (M-C/GW), a plan to institute a socialist one world order and the most deceitful wealth transfer scheme ever invented by man.  We aggressively challenge M-C/GW HERE and how they are brainwashing our children.

Then in 2010 came President Obama’s (and the Democrats in Congress) nationalization of America’s health care system under the ill-conceived and hopelessly flawed “unaffordable” Health Care Act (AKA Obama Care).  Millions of Americans lost their health care plan and their doctors and saw their health insurance premiums double in some cases, the direct opposite of what Americans were told.  In an unprecedented and unconstitutional Congressional edict, Americans were forced by law to buy health insurance, surprisingly upheld by the U. S. Supreme Court.

We haven’t even mentioned Medicare and Medicaid.

That leads us to today where all of the 2020 Democrat candidates for president are advocating the most openly astounding socialist platform that ever came out of the Democratic Party since it was hatched.  Their Green New Deal is impossible to implement without sending us back to the Stone Age and their Medicare-for-all could double or triple the national debt.  If that wasn’t bad enough, they are proposing to abolish the Electoral College, giving 16-year olds the right to vote, packing the Supreme Court and allowing illegal aliens to not only vote in presidential elections, but get driver’s licenses and make them eligible for free health care and social security benefits.

And that isn’t the half of it.  Democrats want and advocate for open borders, tearing down the border walls and abolishing Immigrations and Custom Enforcement (ICE), thus allowing even more illegal aliens (future Democrat Voters) to flood into America by the millions with no impediments.

It doesn’t end there.  It turns out there are two forms of justice in America.  Justice for Democrats that can literally get away with murder and other “high crimes and misdemeanors“ (Clinton, Comey, McCabe, Ohr, Page, Strzok, etc.) and no justice for Republicans who are vilified, demeaned and silenced by socialist Democrats in all of our institutions.   We have a deep state of government employees and the political establishment (Democrats and Republicans) that have every intention of preserving “the status quo and their cushy way of life“ to the detriment of all others and the trashing of the U. S. Constitution, even if they have to break every law on the books.

And lest we forget, the product of our public and higher education systems have been so brainwashed and corrupted by generations of socialist and environmental indoctrination, they have managed to pump out millions of children that have no concept or understanding of why America was so successful in its beginnings in spite of its inherent flaws.  Sadly, those millions now hunger for “free” everything from government and they will bust their little fannies to get to the poles and vote for the Democrats that promise the “free” everything.

Finally, the socialist Democrat Progressives have been so successful, the majority of the population now subscribes to every new socialist proposal that comes out of Democrats, trolling for votes and lusting for power.  Democrats intend to dismantle every institution of American liberty and apathetic Americans are going to watch them do it.  This very likely could lead to civil war!

So what has happened is a once-free country, governed by the rule of law and not of men, has become a country under the rule of “men”, with so many laws (many of them unconstitutional) that government uses those laws against the people to enslave them.  Corruption is rampant and individual liberty has become meaningless.  Free choice is slowly eroded under the onslaught of too many laws.

Who is going to reform government?  Government certainly isn’t going to do it, as is evidenced by the current scandals where no one is held accountable and no meaningful policies ever get passed.  That only leaves the people, but do they have the will and the courage it will take to do it?  So far there is no evidence that they do in large enough numbers.

However, the way that government is behaving, from the scandals of the Fast and Furious gun running by government agents, the Benghazi blatant cover up, IRS arrogance and flaunting of the law, the Clinton collusion and criminal scandals, a whole host of out of control government bureaucracies and programs like medical care and welfare, NSA spying on every American, open borders bringing us an illegal alien invasion and the move to one world order, skirmishes like the Bundy ranch and others will begin to show up in little pockets of resistance all over America, until they erupt into full fledged armed conflicts on their way to outright armed insurrection or civil war.  If the size of armed insurrection isn’t large enough, they will be put down post haste by a militarized and powerful central government that has no intentions of losing dictatorial control over the people.  Texans say, “remember the Alamo.”  Freedom fighters say, “never forget Waco, Ruby Ridge and the Bundy Ranch.”

What catalyst will trigger an uprising?  What action by government will send the people into the streets by the millions saying, “we aren’t going to take it any more?”  (It should have happened years ago) What charismatic leader will come along and coalesce the people into a unified force for freedom?  These questions have yet to be answered as the government grows more powerful each day and America becomes just like all the other socialist Banana Republics in Central and South America, only much bigger, much more powerful and much more deadly, especially if the Democrats get control.

We have a workable peaceful solution, but are there any courageous takers that will sign on?  If something isn’t done, the unthinkable will happen WHERE AMERICA CAN’T BE SAVED ….. peacefully!  Why do you suppose that government is trying to take your weapons and large ammunition clips away?  School shootings aren’t the reason.  They know what’s coming.  They don’t want you firing back at them with militarized weapons when the SHTF.  The proposed HR 7 “Red Flag” gun confiscation law is just the beginning and astonishingly Republicans, Democrats and the President have agreed to sign it.

You can watch as the only true experiment for freedom goes up in flames.  However, being a patriot you may find yourself in the hottest part of the fire ….. or in a FEMA internment camp.

OR, you can cloister your family on five acres in the deep woods somewhere, install our constitutional, legally intimidating No Trespassing signs and hope that government never finds you.  But that won’t stop rising government tyranny, especially if the Democrats take control again ….. and war becomes the only solution.