Judicial Watch recently issued an announcement that its attorneys filed three separate Freedom of Information Act (FOIA) lawsuits against the Department of Justice seeking all of the records regarding the FBI’s Acting Director Andrew McCabe’s political activities, travel vouchers, and employment status. 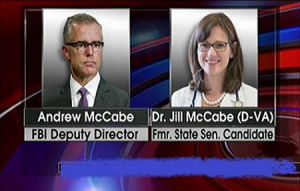 One of those named by Judicial Watch in one of their lawsuits is none other than Virginia Governor Terry McAuliffe, who has been exposed as a liar by his own state police department following the violent riot in Charlottesville.

McCabe’s wife, Jill, received over $500,000.00 from the Democratic Party leadership for her political campaign at the same time her husband was supervising the criminal investigation of Hillary Clinton and her email scandal.

McCabe had previously testified before the Senate’s Intelligence Committee to report on “World Wide Threats,” and the committee’s Democrats had a field day attacking President Donald Trump using the self-proclaimed nonpartisan McCabe.

But McCabe is anything but a nonpartisan public servant and Trump should have replaced him even before firing Director James Comey, say active and retired law enforcement officers. In fact, McCabe’s wife received close to half-million dollars for a political campaign that was filtered through Bill and Hillary Clinton’s close friend and business associate Virginia Governor Terry McAuliffe by Congresswoman Debbie Wasserman-Schultz, who chaired the Democratic National Committee.

Andrew McCabe was also the head of the FBI group involved in the scandalous Clinton Foundation probe. It was he who allegedly made the decision against recommending Hillary Clinton be charged criminally, which Director James Comey also recommended to Attorney General Loretta Lynch. Lynch made headlines herself when she secretly met with Bill Clinton on his private plane in Arizona a mere four days before Comey announced the decision to not charge Hillary Clinton with any crimes.

“There are numerous questions about the ethics and judgement of the FBI’s top leadership, particularly Acting FBI Director Andrew McCabe,” said Judicial Watch President Tom Fitton. “These new lawsuits will help Americans ‘watch the watchers’ at the powerful FBI.”