On Thursday a nonpartisan, nonprofit government watchdog group sent a warning  letter to Acting FBI Director Andrew G. McCabe reminding him of the FBI’s responsibility to follow the law stipulated by the Federal Records Act (FRA) to recover records — including memos Comey admitted under oath that he intentionally leaked to the media. 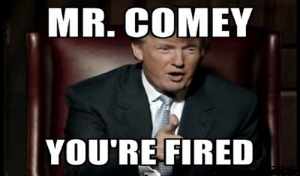 The FRA, a law which originally went into effect in 1950 and was amended by President Barack Obama in 2014, makes the removal of documents from the Bureau by former FBI Director James Comey an unlawful act.

Comey who was canned by President Donald Trump, appeared in front of the Senate Intelligence Committee on last week and made some statement against former Attorney General Loretta Lynch, former President Barack Obama, the New York Times — which he said published “fake news” stories — and complained about the handling of the Hillary Clinton email brouhaha.

Comey also admitted he gave a confidential document about his meeting with President Donald Trump to a “friend” who then gave it to the New York Times, an admitted Trump-hating publication.

“As you are well aware, former FBI Director James Comey gave sworn testimony last week before the Senate Select Committee on Intelligence. Among other things, Mr. Comey confirmed that, while in office, he created various memoranda regarding his meetings with President Trump. Mr. Comey also confirmed that, after his departure from the FBI, he provided at least some of these memoranda to a third party, Columbia Law School Professor Daniel Richman, for the purpose of leaking them to the press. Various media outlets now have reported that Professor Richman has provided these memoranda to the FBI. It is unclear whether he still retains copies of the memoranda.

“I am writing to you on behalf of Judicial Watch, Inc., a not-for-profit educational organization that seeks to promote transparency, accountability, and integrity in government and fidelity to the rule of law. In furtherance of its public interest mission, Judicial Watch regularly requests access to the records of the FBI through the Freedom of Information Act and disseminates its findings to the public. In fact, on May 16, 2017, Judicial Watch submitted a FOIA request seeking these specific memoranda removed from the FBI by Mr. Comey. Judicial Watch also has pending FOIA lawsuits in which the memoranda may be at issue.

“These memoranda were created by Mr. Comey while serving as FBI director, were written on his FBI laptop, and concerned official government business. As such, they indisputably are records subject to the Federal Records Act. 44 U.S.C. §§ 2101-18, 2901-09, 3101-07, and 3301-14. The fact that Mr. Comey removed these memoranda from the FBI upon his departure, apparently for the purpose of subsequently leaking them to the press, confirms the FBI’s failure to retain and properly manage its records in accordance with the Federal Records Act. Even if Mr. Comey no longer has possession of these particular memoranda, as he now claims, some or all of these memoranda may still be in possession of a third party, such as Professor Richman, and must be recovered. Mr. Comey’s removal of these memoranda also suggests that other records may have been removed by Mr. Comey and may remain in his possession or in the possession of others. If so, these records must be recovered by the FBI as well.

“As you may be aware, the Federal Records Act imposes a direct responsibility on you to take steps to recover any records unlawfully removed from the FBI. Specifically, upon learning of “any actual, impending, or threatened unlawful removal, defacing, alteration, corruption, deletion, erasure, or other destruction of records in the custody of the agency,” you must notify the Archivist of the United States. 44 U.S.C. § 3106. Upon learning that records have been unlawfully removed from the FBI, you then are required to initiate action through the Attorney General for the recovery of records. Id.

“[Director] Comey took government records and the FBI and Justice Department are obligated to get them back. The former FBI director isn’t above the law and current leadership of the FBI should stop protecting him and take action,” Tom Fitton noted in a press statement.

Fitton’s team of attorneys and investigations — such of Judicial Watch’s Chief of Investigations Chris Farrell — are currently pursuing a lawsuit  against the U.S. State Department for failing to take proper action to retrieve emails written or received by former Secretary of State Hillary Clinton and other employees which were unlawfully removed from the State Department.  Judicial Watch’s legal argument is that the State Department and FBI never even bothered to undergo a full and complete search for Hillary Clinton’s government emails.

This is one of several of Judicial Watch’s FOIA lawsuits seeking government records and information about the non-government email system used by Clinton. Her email system transmitted and received classified information but the Obama administration allowed her to skate, although she did lose the presidential election.