Transcripts released by the Federal Bureau of Investigation (FBI) that were reviewed by members of the Senate Judiciary Committee revealed that the controversial FBI Director, James Comey, started drafting his statement exonerating then-presidential candidate Hillary Clinton in the infamous email investigation prior to the FBI’s questioning of key witnesses, according to both Senator Chuck Grassley (R-Iowa) and Senator Lindsey Graham (R-South Carolina). 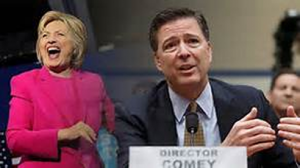 The Judiciary Committee Chairman Grassley and Graham, who chairs the Judiciary Subcommittee on Crime and Terrorism, requested all records relating to the drafting of the statement as the committee continues to review the circumstances surrounding Comey being canned by President Donald Trump.

“Conclusion first, fact-gathering second—that’s no way to run an investigation.  The FBI should be held to a higher standard than that, especially in a matter of such great public interest and controversy,” the senators wrote in a letter today to the FBI.

Last fall, following allegations from Democrat lawmakers, the Office of Special Counsel (OSC) began investigating whether Comey’s actions in the Clinton email investigation violated the Hatch Act, which prohibits government employees from using their official position to influence an election.  In the course of that investigation, OSC interviewed two FBI officials close to Comey: James Rybicki, Comey’s Chief of Staff, and Trisha Anderson, the Principal Deputy General Counsel of National Security and Cyberlaw.

OSC provided transcripts of those interviews at Grassley’s request after it closed the investigation due to Comey’s termination.

Both transcripts are heavily redacted without explanation, a bad habit the FBI and other agencies developed during the Obama administration.

According to Grassley’s press statement on Friday, the transcripts do indicate that Comey began drafting a statement to announce the conclusion of the Clinton email investigation in April or May of 2016, before the FBI interviewed up to 17 key witnesses including former Secretary Clinton and several of her closest aides.

“When I recall the many times the FBI came into a local police department and began to bully local cops and made wild accusations — Sheriff Joe Arpaio comes to mind — it makes my blood boil to hear about these illegal shenanigans by FBI agents,” said former police sergeant and U.S. Marine Tony Rappaport (HPD-Ret.). He added, “The Democratic Party has turned the FBI into their own goon squad. President Trump has enough ammunition now to fire [Robert] Mueller as the special counsel investigating the so-called Trump-Russia case. Mueller is part of the Clinton-Obama political gang who use the justice system to silence their political opponents.”

The drafting of Comey’s statement to give Hillery Clinton a “pass”  also occurred prior to the FBI entering into immunity agreements with Cheryl Mills and Heather Samuelson where the Department agreed to a very limited review of Secretary Clinton’s emails and to destroy their laptops after review.  To this day, the FBI and Comey have refused to explain the reason for destroying the Clinton-connected computers.

In July during a special press briefing by Comey, he shocked many Americans when he exonerated Clinton despite noting “there is evidence of potential violations of the statutes regarding the handling of classified information.”

“In their letter, the two chairmen requested all drafts of Comey’s statement closing the Clinton investigation, all related emails and any records previously provided to OSC in the course of its investigation. OSC is the permanent, independent investigative agency for personnel matters in the federal government and is not related to Robert Mueller’s temporary prosecutorial office within the Justice Department,” according to the press release.

Judicial Watch recently issued an announcement that its attorneys filed three separate Freedom of Information Act (FOIA) lawsuits against the Department of Justice seeking all of the records regarding the FBI’s Acting Director Andrew McCabe’s political activities, travel vouchers, and employment status.

One of those named by Judicial Watch in one of their lawsuits is none other than Virginia Governor Terry McAuliffe, who has been exposed as a liar by his own state police department following the violent riot in Charlottesville.

McCabe’s wife, Jill, received over $500,000.00 from the Democratic Party leadership for her political campaign at the same time her husband was supervising the criminal investigation of Hillary Clinton and her email scandal.

McCabe had previously testified before the Senate’s Intelligence Committee to report on “World Wide Threats,” and the committee’s Democrats had a field day attacking President Donald Trump using the self-proclaimed nonpartisan McCabe.

But McCabe is anything but a nonpartisan public servant and Trump should have replaced him even before firing Director James Comey, say active and retired law enforcement officers. In fact, McCabe’s wife received close to half-million dollars for a political campaign that was filtered through Bill and Hillary Clinton’s close friend and business associate Virginia Governor Terry McAuliffe by Congresswoman Debbie Wasserman-Schultz, who chaired the Democratic National Committee.

Andrew McCabe was also the head of the FBI group involved in the scandalous Clinton Foundation probe. It was he who allegedly made the decision against recommending Hillary Clinton be charged criminally, which Director James Comey also recommended to Attorney General Loretta Lynch. Lynch made headlines herself when she secretly met with Bill Clinton on his private plane in Arizona a mere four days before Comey announced the decision to not charge Hillary Clinton with any crimes.