A Need To Return To Our Root Values

Flag Day until recent years had been observed by generations of Americans with patriotic joy, celebration, parades, and a sense of American unity ever since the Second Continental Congress adopted the first American Flag on June 14, 1777. That same day is also the birthday of the first American Army which would fight and win American independence and freedom by defeating, at great cost of life and limb, England, then the most powerful army and empire in the world.

Flag Day 2017, however, takes place in a nation divided since the presidential elections of November 8, 2016. The election of President Donald Trump ignited a bitter, hate-filled, ongoing intolerant totalitarian political tantrum by those who lost the election.

Thus, Flag Day 2017 does not begin with news of a national celebration of the Flag which is the symbol of the greatest, because most free, nation in the history of the world.

Rather, it begins with news of the attempted assassination of U.S. Congressman Steve Scalise (R-La), the third ranking Republican in the House of Representatives, and other Republican members of Congress, in Alexandria Virginia.

All were at the baseball diamond were in danger of assassination. It is unclear at this time whether this was an act of terrorism inspired by foreign or domestic enemies, or just a lone wolf  assassination attack by an anti-Trump, anti-Republican, Bernie Sanders supporter.

There is no doubt, however, that the purpose was to terrorize by assassinating Republicans. What is known is that the perpetrator  asked at the baseball field if it was the Democrat or Republican team that was practicing. After he was informed they were Republicans, he attempted to kill the Republicans. The would-be assassin,  now dead, was reportedly fatally shot by a police officer who was herself shot. (I decline to give the would-be assassin glory and celebrity by naming him.)

The would-be assassin has been identified as a  supporter of Socialist Bernie Sanders who volunteered to work in Sanders’ campaign for the Democrat Party nomination. Sanders has condemned his supporter’s attempted assassination of Republican members of Congress.

Of course, no one should blame Socialst Bernie Sanders for the acts of a supporter. This is true even though Democrat Party leaders, including  Nancy Pelosi, Chuck Shumer, and Socialist Sanders, and the liberal media,  have consistently blamed Trump for any inappropriate act of a supporter of Donald Trump.

They do this on a claim  that Trump has created an “atmosphere” of violence. On this pretext, they have blamed Trump even when it is Trump supporters who have been victims of attacks by supporters of the Democrats and opponents of Trump.

These attacks on Trump supporters at Trump rallies and events have been composed of a motley crew of Democrats, Progressive Liberals, Democratic Socialists, Socialists, Communists, Anarchists, Clintonists, Obamists, or Racialists like the Black Lives Movement or the New Black Panther Party, both which were warmly embraced by former President Barak Obama and each of his two Attorney General appointees, Eric Holder and Loretta Lynch.

Not all Democrats are of this noxious totalitarian political ilk, of course. But all of this noxious totalitarian political ilk are anti-Trump supporters of Democrats or Socialist Bernie Sanders. against Trump. As such, they have been coddled in major cities under Democrat administrations. They have rarely prosecuted at all for violence against persons or property in violent demonstrations against Trump before or after his election.

Further, these violent demonstrators against Trump  have never been prosecuted, as far as is known,  for violation of Trump supporters’ civil rights under the federal Civil Rights Acts, including the Ku Klux Klan Act, 42 U.S.Code Section 1985(3), although the civil rights violations are blatant in attacks on Americans attending Trump rallies or events. I have no doubt whatsoever that had white Trump supporters attacked non-white anti-Trump Democrats attending Democrat rallies or events, there would have been multiple prosecutions under the Ku Klux Klan Act and other of the federal Civil Rights Acts.

While blaming Trump, personally, for any wrongful conduct by Trump supporters, Democrat Party leaders, liberal media, liberal politicians spewing hate against Trump, take no responsibility for creating an “atmosphere” in which their supporters carry out violent attacks on Trump supporters, now including attempted assassination of Republican members of Congress.

This “atmosphere” of hate has included open calls for violence against elected Republican President Donald Trump. A great many of these hateful calls have been by entertainment and media “celebrities.”  They have included calls for assassinating President Trump; burning down the White House;  a progressive liberal since-fired CNN hack “comedienne” appearing carrying a bloodied severed head replica of President Trump like those severed heads carried by Islamist terrorists; a “play” on Broadway by theatrical “artists” depicting the assassination of President Trump so repulsive its financial backers have backed out in disgust.

It also involves  an ongoing witch hunt dominating the news in attempting to prove “collusion” between President Trump or his campaign and the Russians in the election — although in seven long months of investigation by the FBI and House and Senate committees, along with daily false and fake news vilification of President Trump, there has not been a finding of any evidence of “collusion.”

Nonetheless, the anti-Trump witch hunt continues with great venomous vitriol as if it is a “scandal” like Watergate, or the real scandal of Benghazi in which the U.S. Ambassador and three other Americans were murdered by Islamist terrorists while then-Secretary of State Hillary Clinton and then-President Barack Hussein Obama, along with then U.N. Ambassador Susan Rice, lied to the nation that it was all just a spontaneous demonstration by Muslims who were offended by a purported trailer to a non-existent film critical of Islam.

All of this media vilification of Trump to bring down his administration, has thus far produced no evidence of conclusion despite  “leaks” from federal employees, much of which is wrong or is revealed as out-and-out “fake news” after investigation. However, how many members of the public exposed to the original false reports actually learn later that the reports are false, is unknown.

All of this is  being done by influential, opinion shaping progressive liberal politicians; media through alleged journalists who have become nothing more than rumor-mongering political gossip columnists; liberal academic “experts;” and most conspicuously, liberal entertainment and media celebrities; as well as assorted other embittered progressive liberals who can’t get over the loss of the election to President Trump.

The would-be Flag Day assassin reportedly fired between “50 and 70 shots” before he was shot. It has to be asked: How many rounds would he have been able to fire if he wasn’t the only one armed, other than the few Capital police detailed to provide protection to Scalise because of his office.  If those police weren’t there, the would-be assassin might have systematically killed all those members of Congress, firing at them from the third-base dugout as they were trapped within the fenced  baseball field

Predictably, the Democrat governor of Virginia, Terry McCauliffe, a Clinton Democrat who is one of the Democrat Party’s and Clinton Foundation’s biggest fundraisers, exploited the tragedy to call for more gun control. Right. Disarm all law-abiding Americans to be helpless targets and victims of armed lawless gangsters, political creeps like this Sanders-Democrat would-be assassin, and by other enemies of America, foreign and domestic.

This assassination attempt is but more evidence that the farther we Americans walk away from the values of the Founding Fathers and the American veterans of the Founding Generation who gave their lives under the American Flag to establish our American freedom, the more we are becoming a First World economic power with a Third World political culture, as more and more people act out violently if they cannot get their way in free elections.

Ironically, great social injustice is being carried out by those proclaiming they are acting in the name of “social justice.” They proclaim rhetorically that they are righteously acting  in the name of “anti-fascism” –and then act in fact like fascist thugs.

Indeed, the progressive liberal/socialist/communist/anarchist violent demonstrators wearing black shirts (and masks) and committing violent acts in liberal Portland, OR, and other cities, as self-identified “anti-fascists” in the “anti-fa” movement, are indistinguishable from the “Black Shirts” of Mussolini in Fascist Italy, and the “Brown Shirts” of Adolph Hitler in Fascist Nazi Germany.

He is the target of hate-filled, tantrum-like murderous political venom spilled out from progressive liberal entertainment celebrities, politicians, academics, and irresponsible modern American media inventing fake news to protest their loss of  political power as the de facto “Fourth Estate” or “Fourtrh Branch” of government.

Ironically, despite all this hate and personal attacks on him, President Donald Trump, on the day before Flag Day, continued to call for Americans to “Believe in yourselves. Believe in your future. And believe, once more, in America.”

To do this, to preserve and protect the free Constitutional republic that the Founding Fathers bequeathed to us by the service and sacrifice of those of the Founding Generation who served under the American Flag from its adoption on June 14, 1777, I respectfully suggest on Flag Day, June 14, 2017  that we Americans must remember that we are Americans; we must remember our own American history; our own American heritage; we must return to our root American values, and we must “Walk In The Footsteps of Founders” to preserve the freedom they created.

We can begin that renewal of America, by, on Flag Day and every day, remembering also the history of our Flag, which is briefly but informatively provided by one of America’s greatest patriots –author/essayist, and orator William J. (“Bill”) Federer, in his historical www.AmericanMinute.com on Flag Day.[Link]

It is our Flag, and ought to be revered and held as sacred and protected from physical desecration by passage of the Flag Amendment, H.J. Res. 61, and ratification by vote of “We, the People” in our States, as the symbol of our nation, our history, our heritage, our root values, and of the sacrifice of the 1.3-million American veterans who have given their lives fighting for freedom under our American Flag.

It should be realized, too, that the same kind of people who today express their hatred for President Trump, and for America, by burning or defecating on our Flag, are the same kind of people who will in their self-righteous political fervor attempt to assassinate Republican Members of Congress, or the Republican President of the United States, Donald J. Trump.Or you, or your children, and family members, should you dare to disagree with and oppose their political positions and values. 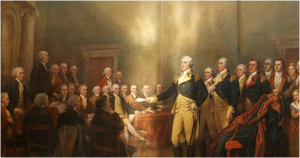 FOR GOD AND COUNTRY FOREVER; SURRENDER TO TYRANNY–AND TERRORISM –NEVER!

FLAG DAY “Millions of our school children will daily proclaim…dedication of our nation…to the Almighty” -Eisenhower. (www.AmericanMinute.com, [link]

Rees Lloyd, a one time ACLU staff attorney, is the co-founder and director of the Defense of Veterans Memorial Project of the American Legion Dept. of California, and a member of the Victoria Taft Blogforce. A longtime civil rights attorney and veterans activist whose work has been honored by, among others, the California Senate and Assembly, and numerous civil rights, workers rights, and veterans rights organizations. He has testified as a constitutional expert at hearings before the U.S. House and Senate representing The American Legion. He has been profiled, and his work featured, by such varied print media as the Los Angeles Times and American Legion Magazine, and such broadcast media as ABC's Nightline and 20/20, Fox News In The Morning, and, among others, by Hannity. His writings have appeared in a variety of national, regional, and local newspaper, magazine, and other publications. He is a frequent radio commentator, and a sought after speaker.[For identification only. The views expressed here are solely Rees Lloyd's and not necessarily any person, entity or organization he may otherwise represent. ] Email: ReesLloydLaw@gmail.com