When plunder becomes a way of life for a group of men in a society, over the course of time they create for themselves a legal system that authorizes it and a moral code that glorifies it. —Frédéric Bastiat

We are socialists, we are enemies of today’s capitalistic economic system for the exploitation of the economically weak, with its unfair salaries, with its unseemly evaluation of a human being according to wealth and property instead of responsibility and performance, and we are all determined to destroy this system under all conditions. —Adolf Hitler

I cannot urge my readers strongly enough to click on the links of every one of these leftist organizations for the truth of what their goals are in destroying our beloved America.

There are many Democrats who need to be defeated, but one who would ruin the State of Florida is Andrew Gillum.  Where he received his training will be of special interest.  Gillum is running against Republican Ron DeSantis for Governor of Florida.  Socialist Andrew Gillum graduated from a progressive training school called Rockwood Leadership Institute.

The Rockwood Institute has spawned a string of Soros-financed leaders, who run and work in organizations like Black Lives Matter, Code Pink, Media Matters for America, MoveOn.org and the Tides Foundation, one of the nation’s largest funders of progressive groups…along with many others.  Democrat Gillum is running on a platform of abolishing Immigration and Customs Enforcement (ICE) and impeaching President Donald Trump.

Rush Limbaugh stated that Gillum wants Florida to be a sanctuary state and he wants Florida to be open borders for all illegal immigrants. Gillum is the classic American socialist who believes America is the problem in the world and that poverty in Central America and the Southern Hemisphere is our fault because we have hogged and stolen too many and too much of the world’s resources.  What horse hockey!  Andrew Gillum is a walking, talking Barack Hussein Obama on steroids.

If you hate America’s law enforcement officers, you will love Gillum, as 38 Florida sheriffs have asked him to withdraw his support for a radical organization’s “Freedom Pledge” via Dream Defenders (DD) which refers to anti-police rhetoric.  DD views the United States as a racist nation where deep poverty and a “vicious cycle of disenfranchisement, discrimination and depression” plagues nonwhite minorities.  They are for more “civil disobedience, civic engagement, and direct action.” The long-term goal is to cultivate “a new generation” of young radical activists. And yes, despite his denial in the debate with Republican gubernatorial candidate Ron DeSantis, Gillum did sign the radical group’s pledge.

Gillum looks at things the way communists and Marxists do. He does not believe in the power of the individual because that leads to inequality and unfairness. He wants everyone to get free health care and free medical care, Medicare for all, oh yes at a cost of trillions to taxpayers. He believes in a guaranteed national income.  These communist plans, if ever implemented, would bring to a screeching halt throughout our nation and Florida…everything nationwide that is building our amazing economy.

Florida gubernatorial candidate Andrew Gillum served as director of a radical youth training organization whose mission was to challenge U.S. “predatory capitalism,” abolish the prison system, fight a “spiritual resistance” battle against “Christian hegemony,” redefine the meaning of “borders” while aiding “undocumented” aliens, and enact the “collective liberation” of “communities of color” amid what it called the United States’ “colonialist” “white supremacy.”  How lovely…a totally Marxist plan. 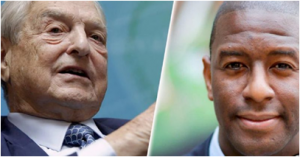 George Soros’ army of communist revolutionaries includes those who have graduated from the Oakland, California Rockwood Leadership Institute, like Islamist Linda Sarsour who was one of the leaders of the Women’s March after President Trump was elected.

Gillum’s graduating class included Rashad Robinson, executive director of Color of Change, also located in Oakland, CA, which was founded by another graduate of the Institute, Van Jones, President Obama’s infamous former “green” jobs czar. Jones stepped down from his position after it was exposed that he was a founding organizer for the communist revolutionary group Standing Together to Organize a Revolutionary Movement (STORM). Soros has financed Color of Change.

Denise Collazo of the Soros-financed radical PICO Network, which in its own terminology says it is “pushing for citizenship, and more, for an estimated 11.3 million undocumented immigrants in the United States.”  We have 5,000 illegals a day entering our country and now we have thousands in three different hordes intending to break our banks and come into the United States.

Nan Aron, president and founder of the Soros-funded Alliance for Justice.

Here is a list of U.S. organizations sponsored by George Soros.  This will boggle your mind. 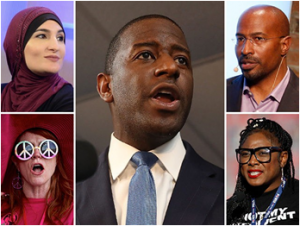 And guess what, Breitbart was the first to raise concerns over this far left candidate.

Gillum directed and oversaw the extremist Young People For, or YP4, while he worked at the George Soros-financed People for the American Way, or PFAW, as field organizer in 2002 and then Director of Youth Leadership Programs from 2005 until January 13, 2017.

The Miami Herald reported this story: Gillum’s ticket to ‘Hamilton’ came from undercover FBI agent, new documents show.  This was a 2016 trip to New York City.  The FBI agents also paid for Tallahassee Mayor Andrew Gillum’s hotel room according to a newly uncovered trove of records.  Once a close friend of Gillum’s, Corey is at the center of the FBI’s long-running probe into corruption in Tallahassee.  There were photos, a video and dozens of text messages between Gillum, the Democratic nominee for governor, former lobbyist Adam Corey and an undercover FBI agent. They appear to contradict Gillum’s explanation for the expenses, which have been made a major issue by his Republican rival, Ron DeSantis. 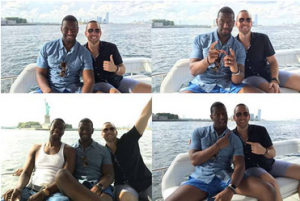 Gillum has not been charged with a crime and has said that FBI agents assured him he’s not a target of the investigation.  But former federal agents and prosecutors say the outing provides an important glimpse into the FBI’s long-running probe into public corruption in Tallahassee, and the lengths to which undercover agents went to investigate Gillum.

At bottom left, Andrew Gillum poses with Adam Corey and his brother, Marcus.

Special to the Times/Herald.

And this Daily Wire article Undercover FBI Agent Paid Thousands Supporting Gillum Fundraiser, Report Says, proves beyond a shadow of a doubt that the Gillum’s friends in the FBI are assisting his candidacy for Governor of Florida.

Florida Gubernatorial candidate Ron DeSantis has said Gillum is “embroiled in a lot of corruption scandals.”

Here are just three of the many candidates who need our monetary help and our prayers.

John James is the stellar Michigan conservative running for the Senate against Democrat Debbie Stabenow.  He’s an Army veteran, a graduate of West Point, and holds two master’s degrees.  We need him in the senate!  Like so many other great conservative republicans, he is not receiving funds from the RNC. Donate here.

Omar Navarro is the all-star gutsy conservative Republican running against Mad Maxine Waters in California.  He is a small business owner and native of California.  He is of both Mexican and Cuban descent and believes only in legal immigration.  We need this man in the House!  He has not received one penny from the RNC.  Donate here.

Marsha Blackburn needs our help to win the Senate seat in Tennessee replacing moderate Bob Corker.  Her Democrat opponent is Connecticut carpetbagger and former Governor of TN, Phil Bredesen.  You can donate here.

There are so many more wonderful true Trump conservatives running for office against long time Democrat incumbents.  We need to step up and help them, and that goes for former Congressman Ron DeSantis who is the Republican gubernatorial candidate in the State of Florida. In all candor, his opponent, Mayor of Tallahassee, Andrew Gillum is an entrenched and committed socialist.

There’s just no comparison, just in terms of solid citizen, decency, straight-down-the-middle normalcy, there’s no comparison in the names like Gillum versus DeSantis, it’s not even a toss-up. So many others are the same thing…and I can’t even mention them all, but you know who they are.  Conservative candidates need our help.  You know who they are, send them your grocery money because many of them are receiving absolutely no funding from the neo-con RNC…we have to save our country…it’s up to us!  Do it!