It is hard to imagine four decades have passed since the army of Muhammad occupied the proud and peaceful nation of Iran. Almost everyone in Iran is in agreement that this untimely conscious assault (Islamic Revolution) on the 2500-year-old Persian Empire and its modern citizens was a colossal and historical error of epic proportions.  Most Iranians now believe the ouster of the Shah of Iran and replacing him with a ruthless, merciless and fanatical Shia cleric, the Ayatollah Khomeini who despised anything Iranian, was a grave mistake.

Khomeini returned to Tehran in February, 1979 and turned the rejuvenated Islamic passion into rabid anti-Americanism and anti-Western as well as anti-Iranian, especially pre-Islamic Persian values. It is noteworthy Islam is against any national identity and will aim to destroy anything non-Islamic.

With the help of the West, Ayatollah Khomeini succeeded in overthrowing the Shah and accomplished his great aspiration: the enslavement of a free Iran and the establishment of a base for exporting terrorism.

The devastation and mismanagement by incompetent mullahs, has been unimaginable. “At a time when momentum is gathering across the world to abolish capital punishment, the Islamic Republic of Iran (IRI) currently ranks second for number of executions, after China, and first for per capita executions in the world.” 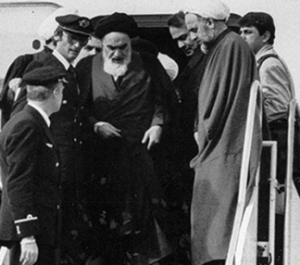 Iran almost overnight was fundamentally transformed from a secular, Western-friendly nation to a 7th century system of Velayat-e Faqih (the Guardianship of the Islamic Jurist), which directly placed Shiite clerics into political affairs, and gave the faqih (representative of the Hidden Imam, al-Mahdi) custodianship over the people. In other words, Iran belongs to Imam Zaman (the lord of the age), and in his absence, a supreme leader is in charge.

In four decades, the Islamic Republic has managed to produce more hunger, more anger, more frustration, more prostitution at a record pace, more drug addiction beyond control and more child execution without any regard to international human rights. Prosecution and imprisonment of innocent people and the systematic and illegal abuse of detainees and hundreds of gruesome acts of torture and rape in prisons skyrocketed. Meanwhile, the United Nations and European countries stood still and watched without a shrug of their collective shoulder.

This genocidal regime has been busy doing all they could to completely wipe out the Baha’is in Iran as well as everywhere else in the world that their blood-drenched hands could reach. The Islamic government condones and promotes every measure of oppression against a minority religious group called the Baha’is.

This ISIS type regime did not even spare the dead. They bulldozed and even uprooted the trees in Baha’is cemeteries. Harassment of other religious minorities and torturing innocent people beyond recognition became part of their modus operandi. They routinely hung dissidents and continued with their 7th century Islamic law, including the amputation of limbs of anyone for petty theft. They are responsible for the unmitigated poverty in an oil-rich country, sex slaves in the Persian Gulf region and the raping of children as young as 2 years of age. 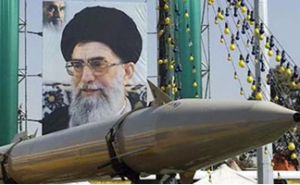 The Islamic Republic years ago started a nuclear program, not for peaceful purposes, as they claim, but only to strengthen their position in the region and prolong their existence long enough to get their hands on the bloody bomb so that they could feel invincible.

What is the probability that the ruling Mullahs will use the bomb? If they stay in power long enough to have it, they are very likely to use it, in one form or another. At the very least, they will use it for blackmail and intimidation in the region. Not even an all-out nuclear exchange can be ruled out. Islam is a religion centered on death with faithful eyes fixed on the afterlife and its promised eternal pleasures.

When the Islamic regime is cornered, they immediately use their propaganda machine to cover up their crimes against humanity. They immediately create chaos and crisis. In other words, they create smoke and mirrors and push the dust under the rug again as they did when Islamists took the American diplomats as hostage for 444 days and during the Iran and Iraq war while using their proxies, Hezbollah and Hamas to attack Israelis and to escape retaliation. They are masters in the business of distracting the world from their own nuclear ambition as they did during the Gaza crisis. They took the attention away from their nuclear program.

Since 1979, the regime has stigmatized, victimized and murdered people without any due process of law. They particularly go after the writers, poets and artists to harass. The first Islamic Revolutionary Judge, Sheik Sadegh Khalkhali, an infamous psychopath, did not hesitate to demand the execution of intellectuals such as Ahmad Shamlou, a famous Iranian poet who was well-known for his non-adherence to any political party and his non-involvement in any political activity. Khalkhali was responsible for many arbitrary executions. According to Judge Abdolkarim Ardibili, former President of the Supreme Court, many defense lawyers were arrested, imprisoned and in at least one case, executed.

Mullahs Fear Their Own Shadows 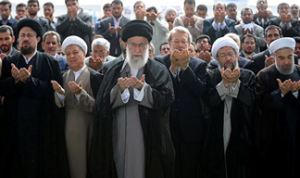 After 40 years in power, this regime still fears its own shadow. On the smallest provocation, they will arrest, convict and execute innocent people. Few people would deny any longer that Islamic ideology and its variants mean, in practice, bloody terrorism, deadly purges, lethal actions, forced ‘hijabs,” show trials and genocide. It is a widespread plague upon humanity. It is disguised as a religion and has penetrated our democracies with the aim of replacing civility and liberty with the barbarism of Sharia Law.

The Mullahs presently ruling Iran are faced with monumental threats. Internally, the great majority of the majority of the populace is against their misrule. Every segment of the Iranian population, including student groups, religious and ethnic minorities, journalists and many others have suffered and continue to suffer inordinate hardship under the heavy-handed Mullahs and their front men. For 40 years, they still use the slogan “Death to America” and Death to Israel” for inside consumption.

Externally, they are still engaged in brinksmanship with the United States and Israel, while trying to wrestle the mantle of Islamic leadership from the Sunni Saudis and their Wahhabi cabal.

Let’s keep in mind that there are many non-turbaned creatures working as the mullahs’ agents, front men and pawns all over the world — including their powerful lobbyists in lobbyists in Washington D.C., They have also hired non-Iranians, including disenfranchised Afghanis, Iraqis and Palestinians as their proxies.

Forty years is a long time. We are hopeful, under the leadership of President Trump, we have a golden opportunity to end this nightmare, not just for the Iranian people, but for the entire free world.

There must not be, however, any compromise, any negotiation or any deals with the Islamists in Iran before making sure that the Iranian people are part of the equation. It’s a do or die scenario for the Iranian people.

The Iranian people want nothing less than a complete regime change through a democratic process via a free referendum. They believe it is the surest, safest and the fastest way to achieve a democratic Iran and end the world’s fear of a nuclear holocaust that is currently facing us all.