That well-fed Muslim Fresno State “Professor,” Randa Jarrar, who publicly cheered the death of much loved Barbara Bush, is now making public terrorist threats against us–The United States–(which is a crime) while this blimp brags publicly; “I cannot be fired because I am a tenured professor!”  Yeah, you go girl. You no doubt will when this is published.

Meanwhile a new video discovered by The Fresno Bee, about this ship wreck PRAISING THE 9/11 PLANE HIJACKERS, whom she called, “resistance fighters,” as well as calling for acts of domestic terrorism against specific individuals….wait… didn’t she cross a line here?

The video shows her discussing Fresno’s agriculture industry, noting that “a lot of the farmers are Trump supporters and just f—ing stupid.” Farmers, take note of this.  She also stated that she cannot stand “the white, hetero patriarchy.”

She goes on to ramble in her own Fresno classy professor way: “I don’t give a f—, I’m ‘buying guns. I’m an American (really!), I’m buying guns. The other side is, like, doing some stupid s–t, I’m gonna do some stupid s—t, I’m tired of, like, being the bigger person (at last truth)–literally am usually–but like, I’m also just tired of the left being, like, f—-ing stupid and being, like, ‘No we have to, like, be gentle…no don’t be f—ing gentle.’ 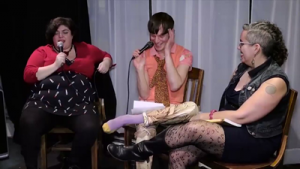 Remember parents, this is who you are paying a fortune to indoctrinate your kids, and what does this ‘tenured’ professor teach? ENGLISH!!!  Yea. we can see that.

Later in the video, Jarrar calls for attacks against someone named Spencer, asking why “Spencer’s house is still standing.  “It needs to be f—ing broken into it. I don’t give a f—” (Robert Spencer is an author who writes the truth about Islam)

Mr. President, arrest this dyke woman (as other newspapers describe her), punish her severely and keep her in prison for the safety of our country. You are the only one who will handle this outrage properly. This is why you were overwhelmingly voted into office. The other politicians and D.C. Department heads. including Homeland Security and DOJ are peopled by Muslims and Communists. This is insane!

From this viewpoint, we are seeing America’s stupidity being the forerunner to America’s doom. It is unfolding before our very eyes with no rightful interference from our politicians who belong to George Soros. How can we be so dumb as to see and hear these things and do nothing.

So Mr. President, it is now in your corner. This is why you are now in the Oval Office.

Haven’t you noticed Readers? We are witnessing the closing days of history when it will all be over…the world, the knowledge of the world and…..us. The Bible lays it all out in detail to forewarn us so we can prepare our destiny with God before it happens. Remember,  practically all the prophecies given before Jesus came have been fulfilled….proven to be accurate. The rest will be fulfilled as well in the coming days.

As the former spokesman for Men’s Wearhouse would say–(go to deep voice):

Again, The Bible foretold these closing days over 2000 years ago, predicting exactly the way the end will come about, along with clues God has been giving us throughout The Holy Scriptures, showing extraordinary events that cannot be overlooked since they are clues showing the end coming closer and closer. And at this moment we are closer than anyone suspects.

No wonder Satan is so obsessed with turning people away from God and His Word. After all, if people do not read the Bible, learn about God and Jesus, they will fail to accept Jesus as their savior thus receiving salvation, meaning being saved, while the devil will delight in taking the biblically ignorant down with him to the fiery pits of hell, where they will live in agony forever.

Satan has his evil army on duty at all times to prevent us from believing in God, ridiculing us for going to church and reading the Bible. Satan wants the souls of every man, woman and child and spends full time trying to snatch all our souls out of God’s Hand. Don’t let him do it.

This is why the Democrat-Communists have worked so hard to get prayer and Bible reading out of the schools and have done so successfully.

They have worked to destroy the Church and have his chief disciple, George Soros, order the media that he virtually owns, to always write negative things about Christians, pastors and churches, in order to discourage anyone from having anything to do with the church. This is why there is so much slanted fake news.

And this is carried over to Hollywood that portrays Christians, churches and pastors in a negative light in their powerful persuasive movies that bring realistic emotions to those foolish enough to buy a ticket to see that propaganda.

These movies make audiences sympathize with criminals, murderers and adulterous married couples, along with the sexually confused, convincing the targets that here is where the truth lies based upon the producer’s lies.

So we see, in these last days, how desperate the devil is to take as many of us down with him as can possibly be snared. Satan wants to persuade people to get away from God, Jesus or church itself. That is why he hates the Church and the Bible that snatches people’s souls out of his hands.

Wait–hold on! Something just clicked!  Satan wants the church and all Christians destroyed. Isn’t that precisely what the Communist Party wants? Of course since they know that a Christian mind cannot be enslaved. And the Communists want the entire world to be enslaved to them.

They are panicked since they have not succeeded in establishing a New World Order, under Communist tyranny, where George Soros will sit on a global throne as Potentate of The World.  And why have the failed to do that?

So the Democrats are actually the Communist Party, which is why they are so active in their attempts to close churches and to actually to make the Bible illegal, prohibiting military chaplains from having a Bible in sight or to read from one, even during military funeral services! And Jesus is not to be mentioned at any time. Beg Pardon?

We of course have proof of all of this…a heavy sponsor of the Democratic Party is: CPUSA–Communist Party USA. They were the force that shoe-horned Obama into the Oval Office.

And it was the DEMOCRATS who are known to have spurred these actions. We mentioned above how the devil had enforcers to carry out his goal to see Christianity abolished. These enforcers also are referred to as Satan’s Angels.

OK, here it comes: Since the Democrats have for years created relentless attacks on Christians, even trying to find a way to close down churches, we now have the correct description of the Democratic Party. They are correctly, yes, CORRECTLY known in the Spirit world as Satan’s Angels.

To vote for a democrat is to openly vote for Satan. I kid you not. This writer feels like the voice crying in the wilderness, pastors, man your pulpits. Readers, recommit yourselves to God. This is your final opportunity to defeat Satan. Begin with defeating Satan’s ‘Angels.’ You now know exactly who those are.

We acknowledge that the Democrats today are not anything like the democrats of yesteryear. Back then they were decent human beings who had character, dignity, and who served the people. That is BEFORE communist infiltrators got in the Party, multiplied and took it over to serve their own ends.

EXTRA NOTE TO READERS.  Do not question my belief in God and the Bible. I actually died in 2003 after a stroke and made the ultimate field trip. Yes it is all real, and by the way, when you do leave your body it is not at all scary. Indeed, there was no fear, but perfect calm and it felt totally natural. So please make Bible reading a normal part of your days. And spend more time in church. Your future eternity depends upon it.