In the military, you learn the essence of people. You see so many examples of self-sacrifice and moral courage. In the rest of life, you don’t get that many opportunities to be sure of your friends. —Adam Driver, actor and Marine Corps veteran

I’ve attended most of the Phyllis Schlafly Eagle Councils, although I missed a few of the early ones, but this one is probably the very best I’ve ever seen.  —Andy Schlafly

Phyllis Schlafly was one of the 20th century’s most brilliant conservative women. She tirelessly worked for God, family and country from the very day she started the Eagle Trust Fund in 1967.  So many of us fought the Equal Rights Amendment with her, and in 1972, Phyllis Schlafly’s Eagle Forum became a reality.  Until Phyllis’s death in 2016, she persevered in promoting pro-family and conservative women’s ideals.

Ed Martin became the President of Phyllis Schlafly Eagles in January of 2015.  Phyllis chose him to carry on her legacy and what a perfect choice she made.

This year’s magnificent 47th Phyllis Schlafly Gateway Eagle Council was held in St. Louis, Missouri from September 13th through 16th, and nearly 600 people were there for the many various speakers.  Why is Gateway in the title?  Because Jim Hoft’s wonderful conservative website, The Gateway Pundit helped President Ed Martin’s team to bring folks from all over the world to speak…including Poland, Germany, Austria and Australia.

Every council I’ve attended has been fabulous, and every year I’ve said that it would be impossible to top the previous year.  But every year President Ed Martin and his team actually surpass the past councils.

This year there were many highlights, many great conservative speakers, and wonderful congressmen, but probably the finest celebration was when Lt. General Michael T. Flynn was given Eagle Council’s Major General John K. (Jack) Singlaub Award for Service to America.

General Flynn spent more than thirty-three years as an intelligence officer.  He served as the Director of the Defense Intelligence Agency and Senior Military Intelligence Officer in the Department of Defense.  He wholeheartedly campaigned for our President, Donald J. Trump.  He was chosen as the National Security Advisor for Trump’s administration until the Deep State set him up to be falsely charged and removed.

General Flynn will prevail and the truth will be known. It is why this great patriotic American who gave so many years of his life in service to his country was honored by Phyllis Schlafly’s Eagles.  As General George S. Patton once said, “Success is how high you bounce when you hit bottom.” 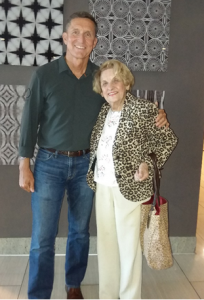 General Michael T. Flynn will soar with the eagles.

Here is a photo of the General with our much-loved Kitty Werthmann on Thursday evening when most folks started to arrive.

Members lined up to have their photos taken with the General.  Several of his family members attended this wonderful event, including his lovely wife Lori and his son, Michael Jr.

On Friday evening, there was a reception with the General prior to the dinner event.  So many young people wanted to shake hands and get a snapshot with this famous American patriot.  Some even brought the General’s book, Field of Fight, for him to sign.

The ballroom was packed and we all enjoyed dinner and conservation and then President Ed Martin and John and Andy Schlafly presented the award to General Flynn.  His speech was short and precise, but said everything that needed to be said.

More than two years ago my dear friend, Vietnam Veteran Allen Clark introduced me to the General.  Captain Clark was a Military Intelligence officer assigned to the Fifth Special Forces Group. He gave not only his blood, but his flesh in this war.

Thanks to Captain Clark, over two years ago, I interviewed the General and wrote my first article on this great American patriot.  I had gotten his book, Field of Fight prior to the interview.  That book is so marked up and dog eared, but it is the book that told me how brilliant this wonderful veteran was and still is, and it is the book I carried to the council meeting to have him sign.

I called Capt. Allen Clark and asked him to come to the council meeting to honor the General.  He said that they’d just come home from traveling and had so much on their plates that he didn’t think they’d 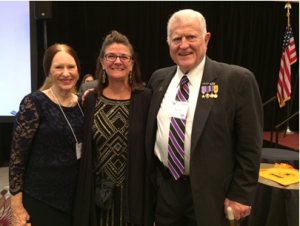 be able to make it.  However, he said he would ask his wife Linda when she woke from a short nap.  I got a call a little later and Linda told Allen, “You bet we have to go!”

Thanks to Linda they both attended this fabulous council meeting and gave me the opportunity to personally meet them.  Captain Allen Clark and his wife Linda took a picture with General Flynn’s beautiful wife Lori.

Captain Clark is the author of several wonderful books, Healing Soldier, Wounded Warrior, and Valor in Vietnam both of which tell the story of service to this country. He has a new book out soon entitled, “Soldiers’ Blood and Bloodied Money How the Elites Rule the World.”

Allen Clark was awarded the Eagle Award for Service, and he well deserves it.

Gold Star families are immediate relatives of members of the U.S. Armed Forces who have been killed in combat or in support of certain military activities.

My friend Kathleen Marquardt, who is the Vice President of Tom DeWeese’s American Policy Center was at this amazing council meeting.  She said, “I have never been surrounded so many amazing Christian conservative people anywhere…this was a first.  I have joined this wonderful organization and will continue to work for them.”

When we watch the evil emanating from today’s Democratic Party, remember that there are great men and great conservative organizations who are fighting to retain our freedoms and liberties.  Support and honor them.  Please donate to the Mike Flynn legal defense fund.