Islam is a religion of peace and the great majority of Muslims are not a party to any plans and actions of the radicals- Islam apologists claim. Who are exactly Islam apologists?  Many politicians, left and right, academic professors throughout America who have been handsomely funded by Islamic governments and organizations market a highly sanitized and distorted version of Islam to young and impressionable minds. Leftist media and journalists, and host of others.

Muslims are radical even in their interfaith dealings. Various sects and sub-sects pronounce other sects and sub-sects as heretics, worthy of death. Women are treated as chattel, deprived of many rights. Hands are chopped off for stealing even a loaf of bread, sexual “violations” and “indiscretions,” as defined and delimited by Islamic Sharia is punishable by stoning, and much more. These are standard day-to-day ways of mainstream “moderate” Muslims living under the Stone-Age laws of Sharia (Islamic jurisprudence). Their own historians record that Ali, the first imam of the Shiite and son-in-law of Muhammad, with the help of another man, beheaded 700 Jewish men in the presence of the prophet himself.

While Americans are confused, our mainstream media non-stop detracts the populace from finding out the truth and continues the same mantra that there is only a small group of “radical Muslims” who give Islam a bad name. Islam by itself is like any other religion in the world and eventually “moderate Muslims” will march forward and reclaim their “religion of peace,” so they claim.

Let us not forget, the “infidel” world has been complicit in the spreading Islam through its blunders, complacency, and greed. Unfortunately, even some of our well-versed officials fall short when they are put in front of the camera.  They refuse to acknowledge it is Islam that is the source of evil, so they resort to a redundant phrase of how “moderates” can reclaim the faith. 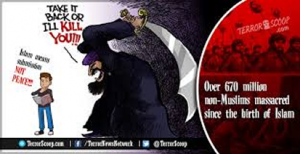 Regrettably, a large segment of the population goes along with these nonsensical euphemisms depicting Islam because it prefers to believe them. It is less threatening to believe that only a hijacked small segment of Islam is radical or politically driven and that the main body of Islam is indeed moderate and nonpolitical.

Stretching the benefit of the doubt beyond limits, one may believe that all these acts and horrors are committed by a small minority of thugs and radicals who happen to be Muslims. Fine, let us ignore all those “fringes” for now – those who are giving Islam a bad name. And never mind Saudi Arabia, the cradle of barbarism, fixed in formaldehyde since Islam’s inception. Also, let us overlook the dastardly Shiite fanatics presently ruling (ruining) the great nation of Iran. Iranian Shiite Hitlerists are hell-bent on wiping Israel off the face of the planet, while viciously devastating Iran’s own largest minority – the Baha’is, people universally-recognized as law-abiding and peaceful.

Would someone account for what is happening in the “civilized” Islamic country of Turkey today? In a very short time under Islamist control, the legacy of Mustafa Kemal Atatürk has been all but wiped out in Turkey. President Erdogan, is taking Turkey where Iran was 40 years ago. The atrocities of the Turkish government towards the Kurds are unimaginable. The history of  “The Armenian genocide” by Muslim Turks are indescribable.

It cannot be clearer than this. I have a suggestion for the leftist media and Islam apologists. Open the Quran and take a black permanent marker and remove all the passages they believe are not part of “good” peaceful Islam.  Then show their handiwork to the average Muslim in Dearborn, Michigan and see what kind of consensus they receive.

Fascism is exactly what Islam was crafted to be from the very beginning.  It is no coincidence that Islam has historically been so cozy with the fascist left. Anyone who presumes Islam is benign and that Jihadists are “radicals” is blind. He cannot presume to be intelligent, learned, and worldly and be so blind.

The bottom-line is that the non-Islamic world has a huge problem on its hands—ever-encroaching Islam. For as long as there are mosques, madrasahs, and Islamic centers, as long as vast cadres of well-paid, highly indoctrinated and strategically placed mullahs and imams, and, as long as there are people who prefer to be treated as children, Islam will flourish anywhere and will pose an existential threat to non-believers.

All the excuses, grievances and reasons given for the savagery of jihadists and Islamofascists are mere side issues. Our problem is Islam.