MOSCOW 5/25/17–The accuracy of the above headline was not deliberately engineered or coined by this writer. The phrase came from Chaplain Liza Hart during a casual conversation by phone this morning as we talked about the mind-boggling state of our once great nation. Chaplain Liza known as the flying chaplain owns her own airplane which can take her over the mountains to six prisons she serves. 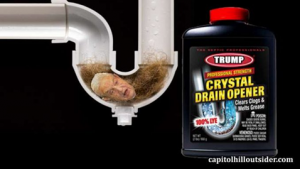 “To really drain the swamp, as Trump promised, it is necessary,” Chaplain Liza offered, “to first get rid of the hairball clogging it up.”

That hairball is George Soros who hires armies of people to block and sabotage everything President Donald Trump attempts to accomplish for our country while causing chaos and confusion. The swamp cannot be drained until that hairball has been removed. That is the first priority.

Soros is behind every protest, riot, and misleading news report about our president and our country. He owns most of the news media and the “reporters” who are on his payroll print every lie he wants published.

He is falsely making the public believe that it is the Republicans, yes, the conservatives, who have turned against our duly elected president “after seeing the truth,” which is the big lie. It is the conservatives that turned out in droves to put him in the Oval Office and who solidly stand by him today. This is another example of Soros’ misdirection which he so skillfully pulls off.

We can immediately get rid of that hairball by allowing Russia (that has an international arrest warrant for Soros), to come in, arrest him, and take him back to Russia for justice. It is up to us to contact the White House, President Donald Trump and the Attorney General, insisting that this order be executed without further delay. We are currently in a crisis that must be averted while we still survive.

Once that hairball is removed, THEN the swamp can be drained since it will not be clogged. Once George Soros is turned over to Russia, sanity can return to the U.S. and even the world itself. Readers, this is a call to action! It is incumbent upon all of you to take part in this by contacting our leaders.

How can the world be surprised at the vicious Muslim attack in Manchester on Monday? Wherever these 7th Century stone-age savages manage to get in as refugees to live, they immediately plot to force that area to become an Islamic state ruled by Sharia Law as their own twisted culture becomes dominant pushing out the established way of life.

They do not have to really work to crash our borders. Soros-funded politicians open the gates for them to enter, take over and cause havoc weakening the nation they intend to rule. This aids Soros in turning America into a Communist nation and a part of the New World Order, with Soros as Potentate. Those in the D.C. Swamp cooperate with Soros, not only for the payoffs, but believing that Soros will assist their political careers.

There is now an epidemic of insanity in America, especially since it has been constantly shown what happens when Muslims are allowed to immigrate into an open borders country. One example of the epidemic is a speech given the day after the Manchester attack by Minneapolis Mayor Betsy Hodges who spoke in a mosque to assure the Muslims that she–now get this–STANDS WITH THEM.

Running for re-election in November, Hodges said: “The city must embrace the discomfort of transformation,” her theme of the campaign. “We must work tirelessly to create “One Minneapolis” that works for everyone.” Yes a serious plague of idiocy has swept our nation and it appears to be contagious.

CAIR DELIGHTED THAT TRUMP’S BAN ON MUSLIM IMMIGRATION SHOT DOWN

At the same time, right after the Manchester Jihadist murders, the 4th Circuit Court of Appeals shot down President Trump’s ban on Muslim Immigration, ruling against his executive order restricting travel from several predominantly Muslim countries. What?

This is all going on while yet another country is reeling from mass murder caused by a Muslim suicide bomber. People are still looking for remains of loved ones who were blown apart while democrats work to appease the Jihadists. The victims were mostly very young people.

The Council of American Islamic Relations (CAIR) newsletter that I suddenly began to receive, were delighted at the news that President Trump’s Muslim ban was blocked, stating: “We welcome today’s ruling as a strong indication that the federal courts reject the ‘Muslim ban’ as unconstitutional and un-American” said Director Lena Masri.

The newsletter said the ban was ‘discriminatory,’ ‘prejudiced’, ‘anti-religion’ and, ‘Islamophobic’. We certainly can’t have that ‘ya know, even though wherever they immigrate, they bring Jihad with them.

Here’s another zinger. St. Louis CAIR Muslims want their observance of Ramadan to be recognized by the U.S. Government as a “holy month,” and they got it. Here is how they reported this victory in their daily newsletter headed: The Missouri Chapter of CAIR:

“The world’s largest Muslim civil rights and advocacy organization, today welcomed Resolution 32 by the Board of Alderman that “recognizes Ramadan as a holy month and commits to creating a culture of respect in the City of St. Louis.”

There is no doubt that George Soros bought and paid for the politicians to give the Muslims whatever they want. Obama could testify to that.  The Muslims feel they already run this country, and in a sense, that is true. Again, all of this has taken place immediately following the Manchester Massacre by a jihadist whose parents had made their way into that country.

Head Transplants on the way to becoming a reality:

News just came out of Italy that scientists there are working on performing–this is real-a head transplant. According to Italian news sources they have already done this on a monkey even though the monkey did not survive it. If that procedure improves, we have several recommendations for patients.

Let’s get this straight, There is nothing about controlling immigration sensibly that can be classified as ‘religious discrimination.’  First of all, Islam is NOT a religion, but a radical political action organization. All the religions I have studied seeks to bring out the best of people, the very antithesis to what Islam promotes.

In their “holy book”  are endless instructions to kill ‘infidels.’ those who are not Muslims, to torture, rape slaughter anyone they wish with the promise of 76 virgins awaiting the martyrs who die killing others, which is absolute nonsense. When they die they go immediately into the fires of hell. That’s where that young jihadist is now who caused the murders in Manchester. Muslims, for God’s sake, wake up! You have been lied to by your leaders.

Google–Koran scriptures for violence. There are literally hundreds of verses in their so-called “holy book,” calling for violence against society. The word or even idea of love is nowhere in the Koran. It is all based upon hate. There is no such thing as a ‘lone wolf’ Jihadist. Each one of them have an army of people surrounding them providing information, encouragement and secrets to successful killings. So the ‘lone wolf’ idea is a myth. Many Jihadists are involved in every Islamic terrorist action.

Plus they are backed by their mosque that encourages their rampages as well as the Koran with very clear instructions for mass murders, which is, according to the Koran, their duty. Forget about the many Muslims who are not violent narration we constantly hear. As long as they go to hear the fiery violence preached at the mosques and read the Koran, they must be sent out of every country they crowd into.

The ONLY way that a Muslim can be trusted is if you know for sure that they have denounced the Koran and the Mosque.

Let’s begin by calling the murderers what they are….MUSLIMS, not “radical Islamist’s,” or ‘extremists,’ but Muslims. The deaths caused by them is not a ‘tragedy,’ as the Soros media calls these murders, It is a deliberate evil event. The enemy must be correctly recognized.

It is time for President Trump to have congress officially declare war on Jihadists in their countries. Then we can deal properly with all those who fit that category with many laws to assist us in keeping ourselves safe from them.

Support a move to have The Supreme Court weigh in on the Muslim ban. And insist that President Trump allow Russia to come and take George Soros back with them. THEN the swamp can truly be drained and allow the country to be in working order, once that hairball is removed.

There are many inside secrets of what is coming that will startle everyone who watches the video below (24 minutes) from a former insider who is revealing the truth of what is going on behind closed doors in D.C.

We can no longer have closed brains that manipulate us to simply watch obediently without pushing back. We are doomed if we fail to do that. Below is a link to the video. Watch, learn, and take action to protect you and your families.

LARRY NICHOLS ON YOU TUBE: https://youtu.be/Vpj_YjviWs8

Photo Caption: The Hairball Must Be Removed Before the Swamp Can Be Drained.