No, man certainly cannot control the Heavens and he can’t alter the laws of the Universe.  But you would think he would be able to control his own behavior and activities, given how smart he claims to be.  It would appear that, throughout history, the opposite has been and continues to be true.  An obvious character flaw in the species, manifested in political arguments that have more to do with getting votes than seeking the truth, fixing problems, or passing sound, common sense legislation.

In our frequent articles we have made a concerted effort to bring simplicity to all of the issues we face as American citizens and landowners.  There are root causes for everything and if we understand the root causes, we might just be able to fix “it”, when things go wrong.  The difficulty comes in first determining all of the outside influences (government controls, special interests, market forces, education, egos, money, power brokers, etc.) that we face on a daily basis and the priorities we set to fix those issues, one at a time.  The other malady the people face is their own apathy.   After all, why should we get involved?  However, for our own survival in the pursuit of happiness and the perpetuation of liberty, the arguments for getting involved are crystal clear.  But before getting involved, understanding the root causes of what ails us, is paramount. 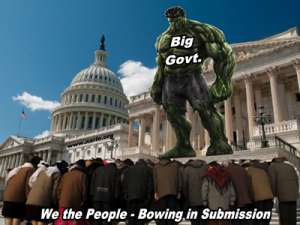 As countries grow and population increases, as diversion of interests propagate, as divisions in agendas spread wider apart, as governments, corporations, businesses, unions and special interest groups get larger and larger, a point is reached where the foundations of our culture and the ability to control our own individual lives under that foundation, begins to breakdown.  We are well past that point now and we are truly out of control, where politics takes precedence over reason and common sense, where our “fixes” don’t work, where rules are meant to be broken, where more rules become necessary and enforcement of all the rules becomes much more difficult.

Remember September 12, 2001, when we all came together with a common purpose, to strike back at the enemy that would perpetrate this violent and dastardly act against innocents in New York and Washington DC?  We wrote songs and poems and built momuments to the dead.  We gave speeches, we got angry and for a while, we were “one” with purpose.  How long did it take before we settled back into our own little factions of self-interest?  Not long.  Now we have anti-war protestors, antifa, white supremacists and black lives matter roaming the streets in protest against something.  We have political parties at odds with each other, scurrilously and shamelessly pandering to one faction or another, using the public treasury as the lever and unconstitutional law as the fulcrum.

How did we get here?  Bigness got us here.  Big government, big business, big banks, big money, big unions and big special interest groups, all colluding with each other.  Bigness gives us concentration of power and degrades individual rights and human dignity.  But bigness also gives us a condition of being out of control and the very real frustration of not being able to get in control.  Large entities, by their very size, lose control of serving the public, processes, personnel and finances, no matter how much they tell you that they are in control.  Accounting errors and financial mismanagement emerge and management of personnel becomes diluted and many times ineffective, or just plain corrupt.

Take a look around at big cities today.  They are anything but in control and in fact are a huge drain on the entire financial structure of the nation because of that lack of control.  One of the reasons they are out of control is due in large part to their bigness and to the intolerable density of humans in close proximity to each other, requiring more rules and regulations directly related to that density.  Unfortunately, this unbalanced, out-of-control environment produces the votes necessary to keep the inmates in the big city political insane asylum in power, promising “free” stuff.

So what do we do if we are big?  We write rules and policies until there is a rule and policy for every single potential action or inaction.  Pretty soon we write rules to strengthen the rules we have already written.  We write rules to comply with other rules from other “big” entities.  Then if we don’t get enough compliance for the rules, we write more rules and increase penalties and enforcement.   Eventually, as time goes by and as the rules increase, we turn more and more law abiding citizens into law breakers.

How many of our readers have had frustrating troubles with big business?  Here is one man’s experience, in his own words.

“I bought a stove from Home Depot.   They sent me a different looking stove than what appeared on both of their websites.  There is a customer service at both Home Depot and GE.  They sent the same model again after I complained.   I proved it with actual photos of the stove received and the one pictured on their websites.”

“I will tell you at GE the right hand does not know what the left hand is doing.  Repeated phone calls, e-mails, blame all around.   My case was written up finally with an official case number, along with official titles of Customer reps.  I sent them documents and photos.  In the end they rejected my claims and told me tersely Home Depot has to deal with it.  That’s it!”

“Yep, customer service departments battling with each other but nothing is actually done for the customer.  So, why care?  I actually told the customer rep at GE, just ask the manager where the stove is manufactured.  If they’ve changed the design, take a picture at the production line.  If she would do that, she would get an answer!  Nope, she said, I can’t do that.”

“Yep, bureaucracy needs to be paid first.  No shortcut allowed.  No simple solutions.  Bureaucracy is the only thing that matters.”

“I later checked both GE websites.  Still the same stove being advertised.  Same picture, but if you order it, you’ll get a different looking one even though they both have the EXACT same model number.   So nothing’s changed despite service departments, offices, overhead, budgets, official titles, that were set up specifically for the customer – that actually does nothing for you.   I’m stuck with a stove that does not look like what I ordered.”

“No wonder the countries going broke.  Someone told me, it’s like that all over!”

Sadly, the man is right.  Try talking to real person at your cable company, the phone company, the retailer ….. or God forbid, the government.

So here we are.  We have big business acting just like big government, big bureaucracies, big banks, big unions and big special interest groups, thumbing their collect noses at the customers that pay their salaries.  Bigness, concentration of power and out-of-control entities have buried WE THE PEOPLE in frustration, confusion and the feeling of utter helplessness.

Our Founding Fathers were very concerned about who had control and went to great lengths to see that control could not be concentrated in too few hands, or in only one branch of government.  From the Declaration of Independence, Jefferson wrote: “We hold these truths to be self-evident, that all men are created equal, that they are endowed by their Creator with certain unalienable Rights, that among these are Life, Liberty and the pursuit of Happiness.  That to secure these rights, Governments are instituted among Men, deriving their just powers from the ‘consent’ of the governed.’”

Since the “consent of the governed” was powerless, due mostly to their own fragmentation and division, special interest groups began getting bigger and more powerful in order to have more influence on big government, as well.  Then came the lobbyists with big money, as we described in our last article, “You Ain’t Never Going To Drain the American Swamp.”

As government, bureaucracies, banks, businesses, unions and special interest groups got larger and more powerful, they began to get out-of-control with their customer service, processes, personnel and finances.  They are so out of control now that we have constant nightmares of ineptness, waste, fraud, abuse and corruption in almost every one of our institutions, that no one person or group seems to be able to bring under control.

One of our greatest strengths as a country and as individual jurisdictions within that country, was keeping political power in the hands of the people in local subdivisions of government; i.e. boroughs, hamlets, cities, parishes, counties and even states.  At a meeting in Skagit County, Washington where we gave a speech on land use and eminent domain issues, a county commissioner in attendance, lamented that his county had been sued 162 times by special interest groups and a state bureaucracy for not being in compliance with a state land use law.  The county commissioners, in desperation and going broke fast with legal fees supporting their position, threw their hands in the air and asked the special interest groups and the state how they wanted the law written and the county would write it that way.  So much for local control.

The point that we would like to make here, is that no matter how big governments, businesses, banks, unions and special interest groups get, the ultimate power and control is still inherent in WE THE PEOPLE, if the PEOPLE are of one mind and that one mind is based on a solid foundation of the fundamental principles of freedom and liberty.  But we are so fragmented and so diverse, becoming of one mind is virtually impossible.  Until we are of one mind, bigness, concentration of power and out-of-control business and government institutions will continue unabated and our frustration and anger will grow with each passing day.

One might say ….. “well how does ‘bigness’ affect my daily life?”  In just about every way possible.   Government is not the problem.  Big, out-of-control, inept, criminally negligent and corrupt institutions, including government, are the problem!

True, but who is going to “fix” it?  From our perspective and extended observations it isn’t likely to be We the People.  Consequently, the problems are not going to be fixed until “We the People” unite and decide they’ve had enough.  But over half the people want “something” from government and are getting it, while the other less than half just want to be left alone by government.  So far the over half wanting “something” from government have the majority of the votes and are winning, in spite of what President Trump is attempting to do.