It Is Time to Start Rowing

Look, I don’t know whether Donald Trump is a real Christian or not.

In fact, I don’t know if we are capable of determining what is in another person’s heart.  I see a lot of people do things that surprise me, especially when they identify as Christians.

That word, Christian, has become almost meaningless to me.  As someone who takes his faith very seriously I often find myself scratching my head over the Heinz 57 brand of Christianity that I see in America today.

Obama claimed to be a Christian and though I really didn’t believe him. I saw a lot of red flags in his confession.  But who am I to judge, right?  At least that is what I hear from many of my Christian friends.

GW Bush claimed to be “born again” and he got a lot of mileage with the Christian community out of that confession.  Who am I to judge, right?  He says he was a Christian, which should be good enough for me.

Bill Clinton was regularly seen attending church with a Bible under his arm.  His attendance increased after he was caught donging that women, Miss Lewinsky, in the oral orifice.  Who are we to judge, right?

Poppy Bush admitted he had never had a “road to Damascus experience” but he was a sorta Christian, except when he was promoting the New World Order.  I guess that was Christ-like trying to overthrow America as we knew it. After all, he was promoting a “thousand points of light.”

He would have been better of promoting THE LIGHT rather than trying to create a new worldly system.  But he was a “Christian”, so what right do I have to question that?

Jimmy Carter also was “born again” and a Sunday school teacher.  He initiated the hard slide left in this nation.   I’m a Christian, and of course Christians don’t judge.  So go Jimmy.

Let me be clear, not one of these “Christian” Presidents lifted a finger to protect the pre-born.  I guess fighting for innocent human life is no longer a requirement for a Christian.

So, I was a bit flummoxed when I saw that many “Christian leaders” were upset at President Trump when he used the Bible as a “prop” outside the fake-church full of fake-Christians at the recently torched St. John’s Episcopal Church near the White House.  I think they were upset to see the President carrying a Bible.

Some of America’s churches and many of America’s pastors have never seen a Bible before.  They were shocked to see one…especially in public.

Why do so many Christians seem to hate President Trump?  Why are so many of our Christian leaders so judgmental of President Trump’s Christianity when they so cavalierly gave a pass to the fake-Christians who occupied the White House before the Trump family?

All of the sudden, it seems, Christians are now permitted to judge others at least when it comes to the Presidency.

Look, I don’t know whether Donald Trump’s name is written in the Lambs Book of Life or not, but I PERSONALLY trust him more than any other president in my lifetime.  We have the deep state today because Mssrs. Obama, Bush, Clinton, Carter, and Bush Sr. didn’t do a damn thing to stop the onslaught of evil in this nation.

Not one of them “drained the swamp.”  They filled it.  The government hacks destroying this nation were hired by the phony five who preceded President Trump.  I thank God every day that Hillary wasn’t elected.  God is merciful even when we don’t deserve it.

But here is the rub, at least from my point of view.

From the moment he was elected President, Trump has been a friend of the Christian Church.  He has done everything he could to invite the church to get involved in helping restore this nation.  He is the most Christian-friendly President in my lifetime.

But he is not “Christian-pure” enough for many of America’s pharisaical Christian leaders.  He offered to remove the Johnson Amendment, the muzzle that was placed on the pulpits by the IRS.  He has invited regular prayer teams into the oval office.  He has called for the teaching of the Bible in our schools.  He has defended the pre-born. He declared that churches were essential when they self-quarantined.  He has made Christianity legal again.  But he does not “act” Christian enough for some folks (aka fake Christians?). 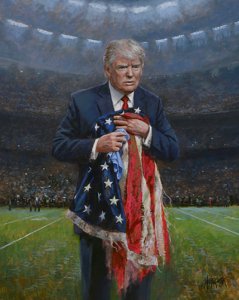 America is in a battle for its very survival.  Christianity is clearly in the sights of the atheistic Left who have seized control of every institution in America.  President Trump was sending a message to the pulpits of America when he took the short stroll to church on Monday.  Christian America is burning and he needs the churches’ help in the battle for our nation.

America is crumbling because we have lost the influence of Christianity. There he stood, in front of that Leftist fake-church, and sent a message to America’s pulpits.  What was his message?

Permit me license to interpret what I think he was saying.

“Please help me church.  I can’t fight this fight alone.  I am a flawed man.  I am President, not Pastor.  You know, and I know, that a return to the Bible is the only hope for this nation.  I stand here in front of this dead-church, Bible in hand, and appeal to America’s pulpits to please rise from the dead and help me in this great battle to save Christian America.  I can’t do it alone.  I need your help.  God needs you to rise to the occasion.  The future of America rests in the hands of the men in God’s house, not the White House.”

Why do we expect the President to fight for what the pulpits will not?  He has extended a hand asking for our help.  Please put down your stones and grab a paddle.

Where is the church?  The ship is sinking. Come out of hiding.  Now is the time to jump in their boats and start rowing.

Editors Note: Send this article far and wide, make it go viral. Thanks Coach. We at NWV love you.