Skip to content
Home/July 2017, Opinions/Hey Folks, Are You Beginning To See A Pattern?

Hey Folks, Are You Beginning To See A Pattern?

In the car the other evening, while waiting for a grandson to exit the local grocery store, we stumbled upon Mark Levin’s radio show where he was going down the list on how government corrupted the elements of liberty that were spelled out in the U. S. Constitution.  He focused on government’s perversion of the “Commerce” and “Necessary and Proper” clauses, as delineated in Article 1, Section 8.  Of course, these weren’t the only perversions of liberty perpetrated by a government that had been given its head to do just about anything it wanted to do because WE THE PEOPLE turned away from our duty to hold government accountable.  Sadly, if the people won’t hold government accountable, they get what they deserve and what they get is slowly evolving slavery. 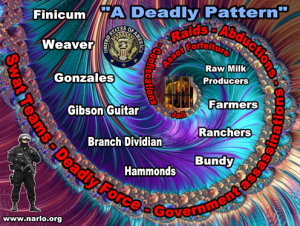 We will describe a few details on what the people have gotten, at the hands of a rogue, out-of-control and Hell bent on domination of the masses, government.  These events taken one at a time in and of themselves do not necessarily cause any alarm.  However, taken in their totality should raise the hackles and the fear of even the most naive American.  Some of these events are well known.  A few however, have received a bored ho hum from the media.

Fishermen found five-year old Elian Gonzales clinging to an inner tube, three miles off the Florida Coast.  His mother and several others drowned in the boat crossing from Cuba.  Only Elian survived.    The fishermen took him to land where he was admitted to a hospital for observation.  After release from the hospital he was sent to live with his maternal relatives in Florida who then petitioned for custody and asylum for the little boy.  But Elian’s Cuban father wanted him back and made an international plea to get him back.  The State Department washed their hands of the issue and said it belonged in state court.  But when the relatives went to state court, U. S. Attorney General Janet Reno said that any filings should be in federal court.  The relatives filed in federal court where the government demanded the case be dismissed.  The federal court judge did the government’s bidding.  After an 11th Circuit Court, Appeals Court and U. S. Supreme Court ruled against Elian’s relatives, on April 22, 2000 AG Reno sent in the storm troopers to abduct Elian and unite him with his father.  Over 130 Immigration and Naturalization Service (INS) were involved in the pre-dawn swat-team like raid that took Elian by force.  No matter how the reader may lean on the issue, the government exercised, excessive, overwhelming force to take custody of a little five-year old boy and sent him back to a communist regime.

Many times we have written that any conflict between American citizens and the federal government will not be a fair fight.  Citizens have side arms and long guns.  The government has highly trained troops, tanks, armored personnel carriers, rocket launchers, Apache helicopters and various other weapons designed to remove life from flesh, blood and bones.  Consequently, civil wars and revolutions are doomed to failure from the start.  But that disparity does not stop citizens from trying when they believe they have been aggrieved by government actions.

And so it was when federal agents from Alcohol, Tobacco and Firearms (ATF) attempted to serve a search warrant on the Branch Davidian compound near Waco, Texas for alleged firearms violations.  Branch Davidian inhabitants resisted the search warrant attempt with small arms fire.  There is still a question on which side fired the first shot.  Nevertheless, several were killed on either side.

That resistance resulted in a 51-day standoff between the Branch Davidian and heavily armed federal agents until a tear gas assault was launched by federal agents on April 19th, 1993 using almost 100 troops, a tank, helicopters and other methods to gain access to the compound.  A fire ensued from the assault and over 70 Branch Davidians died in the blaze.  We are not here to defend what the Branch Davidian folks did.  We only point out that once again the federal government resorted to overwhelming military style force to subdue American citizens trying to go about their business without interference from government.  It was U. S. Attorney General Janet Reno that ordered the final assault.

Since the mid 1960’s national and international (UN) radical environmental policies and Indian demands have come in direct conflict with American constitutional principles and property rights.  So far environmental policies and the Indians have won.  The EPA, BLM and the US Fish and Wildlife are owned and operated, lock, stock and barrel, by environmental zealots.  Environmentally brainwashed educated idiots that have graduated from liberal colleges, staff local, state and the federal government.

Government raided the Gibson guitar company with a fully armed swat team from the U. S. Fish and Wildlife Agency and forced them to pay up for an alleged environmental violation they say they didn’t commit.  But paying up was cheaper than fighting the government in court.  Nevertheless, paying up amounted to a $250,000 settlement, a $50,000 payoff to environmental groups, (what!!??) over $2,000,000 in legal fees, plus the cost of the factory shut down from the raid.  Oh, did we forget to mention that Gibson is not a union shop but their competitors are?  Did we also fail to mention that the owner of Gibson guitar has donated heavily to Republicans?  Who was president at the time of the raid, Barack Obama, a Democrat?  Who was U. S. Attorney General at the time, Eric Holder, a Democrat?  Was the raid a coincidence ….. hardly?

Over the last several decades, small, local skirmishes, sometimes violent, started erupting in different parts of the West, in response to the government and environmental land grab, which led to the Sagebrush Rebellion in the 1970’s.  The skirmishes started to grow in size which culminated in the Bundy Ranch standoff in 2014 between 200 heavily-armed BLM agents and a couple of hundred private citizens carrying guns.  A shooting war where private citizens would start dying in the desert for all to see at the hands of federal agents, wouldn’t play well with public opinion.  The event was widely covered by the news media and the government had no choice but to stand down.

The Nevada Bundy standoff in 2014 led to the Oregon occupation of the Oregon Malheur Nature Preserve in 2016 where trigger-happy Oregon State Patrol and FBI agents couldn’t wait to shoot one of the landowners at a traffic stop.  Eyewitness Victoria Sharps, who was in the white SUV, stated that “red laser lights everywhere, shined on all of the occupants of the rancher’s car, and a hail of bullets from the FBI agents fired into our car where Ryan Bundy was wounded.  It’s a wonder we weren’t all killed.”

The apparent summary execution of Lavoy Finicum on January 26, 2016 at the traffic stop on a remote Oregon highway was murder according to Ms. Sharps.  She stated that rancher Finicum 54, a Mormon and father of 11 children and 19 grandchildren, had his hands up when the FBI and Oregon state patrol agents opened fire.  We have recently learned that once again an FBI agent was caught in a lie about who fired the shots that assassinated Finicum and will likely face criminal charges.  As in the Randy Weaver case, there may still be at least monetary justice for Lavoy Finicum.

What we have described here is just the tip of the proverbial iceberg and a very dangerous pattern of a growing police state.  The alphabet soup of federal agencies are armed to the teeth and itching to demonstrate their overwhelming force when government thinks that citizens have stepped out of line.  The IRS is one of the worst federal agencies in exerting its authority over the beleaguered taxpayer.  We have chronicled our own difficulties with the IRS in multiple articles.  Our troubles mirror the troubles of millions of other Americans who have fallen afoul of the IRS in responding to IRS mistakes resulting in harassment, intimidation, threats and heavy fines for violations that didn’t happen.  The IRS doesn’t need guns.  All they need is the threat of fines and jail time.

In our on-going battles with the IRS and other government agencies, from a lifetime of being confronted by them in business and personally, we have developed defenses and offenses against them.  American rural landowners are aware of our powerful, legally intimidating No Trespassing signs HERE and our new sign HERE.  Hundreds of landowners have obtained our RURAL LANDOWNER Handbook.  Some non-rural Americans are aware of our DEFENSES and OFFENSES against the IRS.   Some have made use of our DEFENSES against local and state governments.

This pattern of a growing police state leaves those that are ill prepared the ability to defend themselves.  If you do not have the knowledge to confront government legally, you are at government’s mercy.  If you respond to government with any form of violence, even if you believe you are right, it is quite likely you will be wounded or killed in a hail of hollow-point or steel-jacketed bullets, purchased by the Department of Homeland Security in the billions, with your tax dollars.

But if you’re scared all the time and haven’t the courage to challenge government when they are wrong, you will have become a victim instead of a self-reliant, stand-up, free sovereign American and you will have emboldened government to get even more powerful.  If you are ignorant or naive about the foundation of liberty then you won’t know whether government is right or wrong and whether you should challenge them or not.

Thomas Jefferson was dead on we he stated that, “an educated citizenry is a vital requisite for our survival as a free people.”  Jefferson wasn’t talking about our current form of education; “public school and college government brainwashing and indoctrination.”

How many of you AGREE with our assessment of the pattern of a growing police state?

Ron Ewart, a nationally known author and speaker on freedom and property rights issues and author of this weekly column, "In Defense of Rural America". Ron is the president of the National Association of Rural Landowners (NARLO) (www.narlo.org), a non-profit corporation headquartered in Washington State, acting as an advocate and consultant for urban and rural landowners. Affiliated NARLO website is "Old Timers Resisting High Tech" (http://www.otrht.com). Ron can be reached for comment HERE ewart@comcast.net. Email: info@narlo.org Website: http://www.narlo.org