“How many parents … send their children to school so central planners can mold them into functionally illiterate cogs in a centrally planned machine, having just enough knowledge to do their preassigned task? How will such cogs be able to think critically, much less sustain liberty and the American experiment? The short answer is that they will not – and that is the point. Samuel Blumenfeld and Alex Newman

I have in the past brought up the topic of how parents are not allowed to know anything about their children’s teachers or principals, but they can know everything about you and your family.

Under Obama’s Federal Education Dept. and the Common Core Data Mining intrusion, teachers were encouraged to ask their students personal family questions to be reported in the children’s files.

Thankfully a small Kansas High School newspaper staff felt there was something very wrong about their new principal’s credentials. The students first began by checking on her credentials and they found several discrepancies. Amy Robertson, the newly hired principal had stated she had attended a private university, Corllins University, where she received her master’s and doctorate degrees’ years ago. The students found the university’s website didn’t work and they could find no evidence it was an accredited university.

Things began to heat up when the students published an article in the school paper questioning the legitimacy of the principal’s degrees and her supposed work as an education consultant. The following Tuesday Robertson resigned.

A very important question here is why the hiring school board had not already done this work?

Robertson’s resignation thrust the students into the state and national news, with professional journalists nationwide applauding the students for asking tough questions and prompting a change in their administration.

The student’s newspaper advisor Emily Smith said people were telling them to “stop poking your nose where it doesn’t belong”, but Smith went on to say the students were at a loss that it was so easy for them to see what was just waiting for the adults to see.

In their article, a team of six students — five juniors and one senior — revealed that Corllins had been portrayed in a number of articles as a diploma mill, a place where people can buy a degree, diploma or certificates. Corllins is not accredited by the U.S. Department of Education, the students reported. The Better Business Bureau’s website says Corllins’s physical address is unknown and the school isn’t a BBB-accredited institution.

Connor Balthazor, 17 said, “All of this was completely overlooked. All of the shining reviews did not have these crucial pieces of information … you would expect your authority figures to find this.”

Rare occurrence? Sorry, I am afraid not! Teachers around the country are presenting their personal and social agendas to your children and telling them to NOT tell their parents and seeking jobs in charter schools where it is much easier to get a job if you are uncertified.

We have schools/leadership training all across this country for LGBTQ, Social Justice, Tolerance, Diversity, Equity and Justice and with some teachers, it sits at the head of their classrooms every day of the week.

Did you all forget Obama’s appointment of the country’s first “Safe Schools Czar” Kevin Jennings, a full-fledged GLSEN man – a man known in gay circles for his close proximity to children? No one is saying he is a pedophile, but I have always believed his work was to indoctrinate and recruit young children to “believe” they were gay.

Recently the news broke, that FACULTY members of a charter school in Sandpoint, Idaho were recruiting students to join a “secret gay club”, concealing their activism from parents.

“We’re keeping it kind of on the down low because this is North Idaho,” Jensen said in a recording obtained by the nonprofit legal organization. “Kids who wanted to participate in the club did not necessarily want their parents to know.”

School employees even went so far as to hold off-campus meetings with potential GSA students at a local library, without parental consent or involvement.

The club came to light when Jensen, along with staff members Michael Bigley and Becky Campbell, invited a student to participate in the club. When the student’s parents found out, they made it clear to the school’s administration they did not want their child involved. The school ignored the parents’ wishes and continued to send the student to GSA meetings during school hours, and on school property.

What is happening in your schools?

But parents, Satanism is not a recognized religion so where are you and what is wrong with your school boards? You do understand don’t you that most of those involved in Human Trafficking and things like Pizzagate are Satanists?

Have you ever heard of the Social Justice Training Institute? One of their faculty, Becky Martinez brags “what I define as my ‘light-switch’ is my role as a change agent.

The quote at the top of this blog was written by the authors of the book “Crimes of the Educators” and it was first published a couple of years ago just before Sam passed away. Sam Blumenfeld was an educator with integrity, loved children and despised what was happening to our children through education. He previously had authored eight books on education and also created a system for teaching your child to read the “right” way. called “Alpha-Phonics. You can find the video’s here.

In Sam and Alex’s book, they explain how in the U.S. utopians, or “progressives,” have tried to destroy traditional America by strategically dumbing down her people. America’s future is being crippled on purpose in order to fundamentally transform the nation, its values and its system of government. Laid out a century ago by progressive luminary John Dewey, the fruits of his schemes are plain to see today. Dewey got rid of the traditional intensive phonics method of instruction and imposed a “look-say,” “sight” or “whole-word” method that forces children to read English as if it were Chinese. The method is widely used in today’s public schools, which is a major reason there are so many failing public schools that cannot teach children the basics. This can only be considered a blatant form of child abuse. 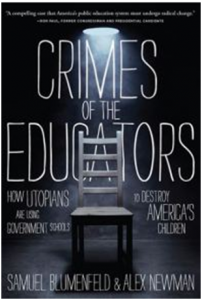 “Crimes of the Educators” reveals how the architects of America’s public school disaster implemented a plan to socialize the United States by knowingly and willingly dumbing down the population, a mission now closer to success than ever as the Obama administration works relentlessly to nationalize K-12 schooling with Common Core.

This blogger makes no money from promoting this book and every parent concerned about what is happening through the education of their children should read it and know exactly how and what is planned. [Link]