Hillary has written a book about herself–naming names of those who thwarted her election to the Oval Office as President of The United States. Hillary slipped down Hill with that book project that, she thought, would set all of America straight. LGBT BEWARE!

Her Sponsor, George Soros was so sure that she would be swept into the Oval Office that at his invitation, Hillary spent the weekend with Soros in his Southampton, Long Island mansion, beginning August 9th, 3 months before the election.

Soros had Newsweek Magazine put the ‘Election Day photo’ of Hillary on their cover, with the title, Madam President,  which was released a couple of days before the election. A book store in New York told me about it when the magazine was received. 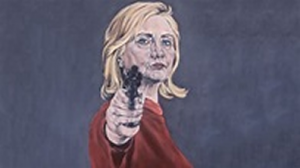 The fuming began. Her rightful election was sabotaged, saith she, so she later wrote a book telling how this defeat REALLY happened. She would have been elected had the Republicans stopped undermining her.  Pity!

Here are some of the reviews of her book of pity:

“Hillary Clinton’s 506-page memoirs has come out.  So much of her personality shines through, that in the end, you, too, will want to sleep with an intern.” ~ Craig Kilborn

“In Hillary Clinton’s new book ‘Living History,’ Hillary details what it was like meeting Bill Clinton, falling in love with him, getting married, and living a passionate, wonderful life as husband and wife. Then on page two, the trouble starts.” ~ Jay Leno

“In the book she says when Bill told her he was having an affair, she said ‘I could hardly breathe, I was gulping for air.'”  No, I’m sorry, that’s what Monica said. ~ David Letterman

“Hillary Clinton, our junior senator from New York , announced that she has no intentions of ever, ever running for office of the President of the United States .  Her husband, Bill Clinton, is bitterly disappointed. He is crushed. There go his dreams of becoming a two impeachment family.” ~ David Letterman

“Last night, Senator Hillary Clinton hosted her first party in her new home in Washington . People said it was a lot like the parties she used to host at the White House. In fact, even the furniture was the same.” ~ Jay Leno

“Hillary Clinton is the junior senator from the great state of New York . When they swore her in, she used the Clinton family Bible – the one with only 7 commandments.” ~ David Letterman

And this review by your website host: “That book wasn’t released, it escaped–anyway it will be useful as a door stop.” On the plus side, what she lacks in quality, she makes up in quantity (506 Pages).

Our thanks to reader-contributor Lawrence Craig for Alerting us to this story.