Home/April 2019, Opinions/Holding Politicians Accountable And The Danger Of Political Correctness

Holding Politicians Accountable And The Danger Of Political Correctness

In the land called America, citizens exercise their power through the ballot box. Hence, when you vote in America, you vote for our freedom. When you decide to vote for a candidate, it is your civic duty to make sure that person has been thoroughly vetted and has answered your questions openly and publicly.

America is faced with an insidious, multifaceted, and the deadly threat of Islamic fundamentalism. Since Islam has been around for centuries, there is a tendency to ignore or even deny the threat it poses to humanity. Various concessions are made, some of them as good faith offerings and some in the hope of placating devout Muslims. Yet, concessions to threats are appeasement. And appeasement has never solved any problems. They only whet the appetite of the aggressor, give it more power, and make it even more dangerous.

Frankly, if the candidate of your choice has no knowledge of Islam’s Stealth Jihad that currently moves at the speed of light in the US and refuses to be direct and transparent with his constituents, that candidate has absolutely no business to run for office. In fact, he would be a disaster. It falls into your hands alone to decide whether you to vote for the survival of America or for your favorite candidate no matter what. 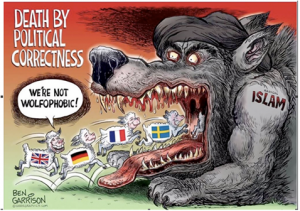 You must keep in mind that the vote you cast will not simply replace one politician with another. At this point in time, every vote has great existential implications. Whether we like it or not, we are truly in a war of survival in the era of Islamic terrorism. You cannot negotiate co-existence—live and let live—with Muslims. Eradication of the Islamic ethos is a daunting task, since Islam is truly a virulent persistent pandemic disease. Muslims have been deeply indoctrinated since they were babies.  They will never assimilate. You need to elect a person who will stand and fight against Islamism and not cut and run!

To call Islam, a great religion and misrepresent it is not simply a harmless gesture of goodwill and peacemaking. This ignites the fire with every intention of consuming us. Therefore, it is imperative that we choose our elected officials with great care. We must entrust the helm of our nation to the hands of a person of impeccable integrity who is unconditionally loyal to the American Constitution, who does not sacrifice principles and truth at the altar of expediency and political correctness, and who does not shirk from what he must do to ensure our nation’s survival in the face of internal and external assaults.

Once again, it is election season. Once again, the slick easy-answers politicians give while they do and say everything to get our votes. Our Marxist Democrats promise us everything and more. They will bring the troops home and will give us a raft of goodies, so they promise. But, when the barbarians are inside our gate, it is suicidal to run and hide in the cellar. Islamists are not at the gate. They already have breached the fortress America in significant numbers. They wait for the opportunity to open the gate fully to their co-cultists and make the land of the free a graveyard of Islamic slavery.

A sobering statement: The actual king in a democracy or in our Republic is not the voter, (as they have made you believe) but the forces or powers that steer him in his vote. The Golden Rule means he who has the gold makes the rule, it is said cynically, yet there is a large dose of truth in it. Democracies are plutocracies — the rule of money. It is a sad fact that money drives politicians to power and keeps them there. Without money, they never make it to first base.

Without more money, they may just languish at first base. To advance further to real power, politicians need large sums of money. And people who have money, as a rule, do not give politicians money without extracting payback. The higher the politician moves, the greater is his IOU to the people and the organizations that own him.

Moneyed Muslims and Muslim organizations with vast interest in promoting Islam are thoroughly familiar with the power of money to recruit people to do their bidding. That’s why many non-Muslims work at all levels of government and the society at large to further Islam. In short: they are paid to do a job.

We need accept that jihadists live among us. It is only going to get worse. Jihadists consider themselves the army of Allah. Muslim organizations have been busy and working “stealthily” changing America in what is called “Soft Jihad,” or “Cultural Jihad,” in the United States. Soft Jihad is practiced where the sword of jihad is not advisable, where Muslims are not strong enough to unsheathe their sword, where the true nature of Islam is exposed and when the general public would likely stamp them out.

A critical tool of soft jihad, therefore involves penetration of the American educational system, by use of means such as Da’wa-a religious duty of each Muslim to convert non-Muslims in order to strengthen the Islamic Ummah. Then they use violent Jihad. Also, don’t bank on politicians, they are master practitioners of the art of the politically correct, to protect liberty. Politicians must be urged by the citizens to safeguard liberty, scrutinized closely that they do the work, and are held accountable if they fail to do so. You, as a citizen, also have a job to do. Take a few minutes a day and do what you can to protect freedom. “Freedom is not free,” may be a cliché. Yet, it is the most profound four-word sentence in the lexicon of the free.

We, individual Americans, more often than not, are outmanned and outgunned by these group forces. Lone rangers win only in make-believe movies. In real life, governments, institutions and organizations are the ones who prevail. They have the funds to buy the services of the media; employ lawyers, politicians, and mercenaries of all stripes.

EDITORS NOTE: At the Siege of Vienna, September 11, 1683, Islam poised to overrun Christian Europe.  We are in a new phase of a very old war. You can order Siege of Vienna September 11, 1683 this most excellent movie from Australia but, you need a Multi-Region DVD player to view it. You can also order this movie from Amazon for $16. It plays in German or English. Or, you can watch it on your computer by Amazon’s Prime Video.