Home/April 2020, Opinions/How Close Are We To Living Like The Chinese?

How Close Are We To Living Like The Chinese?

Chinese Communist Party Oath of Membership:  “It is my will to join the Communist Party of China, uphold the Party’s program, observe the provisions of the Party constitution, fulfill a Party member’s duties, carry out the Party’s decisions, strictly observe Party discipline, guard Party secrets, be loyal to the Party, work hard, fight for communism throughout my life, be ready at all times to sacrifice my all for the Party and the people, and never betray the Party.”

Hitler Party Oath: “I swear loyalty to the Reich’s constitution and pledge, that I as a courageous soldier always want to protect the German Reich and its legal institutions, (and) be obedient to the Reich President and to my superiors.”

They snuck in the back door, infiltrated our institutions and academia, stole our secrets, copied our intellectual property, sent spies into our companies, established a Chinese communications network, bought up our national debt with American dollars ($1.17 Trillion), corrupted our trade policies, altered our news, hacked our computers, threatened our national security and undermined our values and principles, all under the noses of American politicians and in many cases, aided and abetted by those same politicians.  The American people, being none the wiser, are now in a Chinese death grip of changing culture, academic influence, disrupted supply chains, threats to cut off needed medical supplies, hooked on Chinese products and at the mercy of Chinese skullduggery, propaganda and lies.

China’s goal of world domination is no closely guarded secret.  Their plan is well underway and most of that plan has been built with 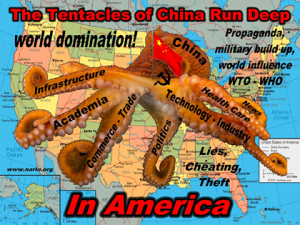 American dollars.  China is building ports, roads and bridges all over the planet in its attempt to peddle Chinese influence and control.  It is signing trade deals with multiple countries for critical resources and raw materials.  Its focus on high tech could pole vault China into a world leader, surpassing America’s once dominant role.

China has now given the world another biological pandemic with the Coronavirus and forced world governments to order what is just short of martial law in a planet-wide lockdown of the masses.  The cost and human toll may never be known.

For three to four decades, America and many other nations have sold their proverbial souls to China in exchange for cheap labor, that is until President Trump threw a large monkey wrench into the corrupt gears of a nation state with no honor.

China is a heavily regulated society, enforced by a military dictatorship.  Its citizens are nothing but pawns of a communist oligarchy, ruled by the National People’s Congress, the President and the State Council.  China’s meteoric rise into a commercial and military super power over the last few decades was based almost solely on propaganda, lies, cheating and theft of the creative products of other nations, mostly American technology.  It still is!

To control the Chinese people even more than they already are, China has instituted what is called a social credit system.  The system was described by one journalist as China’s “most ambitious project in social engineering since the Cultural Revolution (1966).”  The system is designed to give each Chinese citizen a credit (or social) score based on their individual deeds and actions.  A bad score will keep a Chinese citizen from riding trains or airplanes, or keep them from working as civil servants, or even in certain industries.  Many Chinese do not like this new credit score system and are voicing their opposition.  But voicing opposition under the Chinese Communist Party can be extremely dangerous.  Some doctors who blew the whistle on the Coronavirus simply disappeared.

That’s China.  What about America?

Since China dumped the Coronavirus on America and the rest of the world, the individual freedom and unalienable, constitutional rights of American citizens have been tossed in the garbage can with reckless abandon.  State governors, county executives and city mayors, drunk with new found quarantine powers, have issued executive orders demanding Americans be tethered to their homes and only essential services are allowed to remain open for business.  These political “executives” get to decide what is essential and what isn’t.  In Michigan, the esteemed governor has ordered that greenhouses and garden stores be closed and seed sales suspended, during the spring mind you!  And yet hardware stores can be open.

In many states, private construction has been shut down but allegedly “needed” public projects are allowed to continue.

Just recently a pastor in Mississippi was arrested and his parishioners were sent home by a large police presence.  The pastor was told by the police that he no longer had any rights under the mayor’s quarantine laws, even though all of the parishioners were in their own cars with the windows rolled up and were listening to the pastor on FM radio, observing the CDC’s social distancing guidelines.  The pastor and the parishioners were not hurting anyone or putting anyone in danger of transmitting the virus.  Nevertheless, how dare he violate the supreme mayor’s executive order!

What has become abundantly obvious is that the American government, at every level, has the power to suspend all civil liberties and unalienable rights in the name of public health and safety.  The threat to public health and safety is at the sole discretion of the executive branch, based on what have turned out to be inaccurate computer models, or at the whim of some medical professional (Dr’s Anthony Fauci and Deborah Birx) whose statements change by the day.  “Don’t need to wear a mask.”  “Yes, wear a mask.”

These same type computer models, based on flawed data, and the pontifications of alleged climate professionals, are what drives man-caused global warming policy, scares the people into irrational fear and guilt and forces the masses to pay billions and trillions to solve a global climate issue that has been proven to not be caused by humans.  (See: “Climate“)

Maybe the Coronavirus and Climate Change issues aren’t like China’s military style regimentation and their social credit scoring system, but they are designed to put Americans in chains nevertheless.  If Americans don’t feel like they are in chains, they must be brain dead.  They’re do-nothing, compliant actions speak volumes.  Millions of Americans are weak, spoiled, pampered by and dependent on a government that cares nothing for the people’s welfare, only their vote.

But ladies and gentlemen, we are Americans for God’s sake.  Where is our backbone?  Why do we lie down and let a few power-hungry oligarchs determine our path, destiny and our freedom?

The blood of heroes and patriots courses through our arteries and veins.  Millions of men and women have paid the ultimate sacrifice and many have been maimed for life so that we can stand free on a new continent, where freedom was born.

We are the descendants of those whose spine was stiffened by courage when their country called, or evil raised its ugly head.  We are the direct lineage of the men and women whose intellect and fortitude carried them to new heights and made America the greatest, proudest, industrious, creative, productive and most generous nation on Earth.  We are the sons, daughters, grandsons and grand daughters of those who stood up to tyranny, no matter what the cost.  The genes of creators, inventors, hard workers, the educated, the warriors and those in service to others, are an integral part of our DNA and it lies dormant in our being until it is called upon to do good ….. or destroy evil.

Americans are not enslaved and regimented Chinese.  We are a free people in mind, body and spirit.  We do not bow down to evil and tyranny.  We chew up and spit out evil and tyranny when they begin to grow like a cancer in our midst.

Unfortunately we have allowed evil and tyranny to become more than a cancer in our midst.  They threaten our very livelihood and freedom.  The overt and heavy-handed government policies to control the Coronavirus have opened the door to further violations of our civil rights and liberties. Are we to succumb to them, or will we rise up en masse and smite them?

After the smoke of the virus has cleared, will we have let the genie of slavery out of its bottle, to rule us by flawed computer models and the alleged professional experts, who get it wrong all the time, in the name of public health and safety?

Remember!  Americans are the light to the rest of the world, not because we are better than anyone else, but because we live under the bright light of liberty that frees us to climb the highest mountains, or jump off this once giant planet into the vastness of space, where only the brave dare tread, in search of the secrets of our island Universe.

Today, before us lies an obstacle and the obstacle is not a foreign enemy but a false domestic ideology that consumes our freedom like a dry sponge soaks up water; an ideology that is born of the collective where the individual is subordinate to that collective, (communism-socialism-collectivism) in direct conflict with each American’s unalienable rights; an ideology that is hidden in deceit and is the antithesis of freedom and liberty.  It is an ideology that requires obedient compliance ….. compliance to the demands of a corrupt elite who seek absolute power over the masses, rather than Americans putting up a strong resistance to those who seek that power.

This ideology is one of retreat and appeasement.  It is one of “hold back” and “slow down”, instead of moving forward with boldness like we used to do in days gone by.  It is an ideology that seeks to weaken America, not strengthen it.  But worse, it is an ideology that strips individuals of their own innate strength and free choice and makes them dependent on the collective and the corrupt elite, instead of being proud, responsible and self-reliant.

We have a choice.  We can lie down and play dead for the Chinese model of military regimentation here in America, or we can rise up like free people are supposed to do and reclaim the freedom our forefathers gifted to us …… at great sacrifice.

Americans may not be living like the Chinese are today, but how long will it be before the American government sets a Chinese style social order system for the virus?  How long will it be before all Americans must have a government-issued card that says they are virus free, or an RFID chip planted in a person’s earlobe containing all of their personal information?  If Americans will put up with any of these controlling devices, they are no longer Americans, just sheep being herded by a giant government sheep dog.