Home/April 2020, Opinions/How Easily We Allow Government To Suspend Our Rights

How Easily We Allow Government To Suspend Our Rights

“Experience has shewn, that even under the best forms of government, those entrusted with power have, in time, and by slow operations, perverted it into tyranny.”  —Thomas Jefferson

“We beseech you Oh Lord, in the name of justice and the sanctity of our God-given natural rights, to deliver us from the edicts of the CDC, NIH and WHO and those politicians that parrot their words and pass laws and issue executive orders from their advice.  Although they speak with the authority, knowledge and experience of the alleged highly trained expert, their pronouncements and utterances are based on false premises, in-adequate information, insufficient, inaccurate, or purposely padded statistical data and flawed computer models.  They have turned us into virtual slaves in what was once a free land, on a thread of data so thin it should be called pseudo science.”

Some educated idiot (purportedly a German researching man’s inhumanity to earth)) back in 1970 foisted upon the rest of the world the “Precautionary Principle” theory, “which is a strategy for approaching issues of potential harm when extensive scientific knowledge on the matter is lacking.  It emphasizes caution, pausing and review before leaping into new innovations that may prove disastrous.”

In lock-step with the Precautionary Principle, your “all-wise” government, from the mayor of every city, to the executive of your county, to 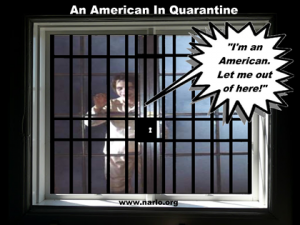 the governor of your great state, at the behest of the alleged medical professionals, couldn’t wait to lock you up in your home before ALL of the facts were sorted, processed, analyzed and peer reviewed.

From the exalted halls of government, one by one, in the name of public health and safety, came a cascade of executive orders by governors and mayors, giddy with their newfound powers, to shutter businesses, close churches, shut down schools and force people to stay in their homes under the threat of fines and jail time, allegedly to save us from the deadly threat of a virus spawned somewhere near or in Wuhan, Communist China, whose efficacy was not fully known.

Oops!  It turns out that the infamous Coronavirus wasn’t much more deadly than the common flu where somewhere between 25,000 and 60,000 die every year and that is even with a vaccine.  We don’t quarantine the entire country for the flu.  We didn’t quarantine all of America for the SARS, MERS and Ebola virus outbreaks.  Why did we shut down America for the Coronavirus?  Could it have been an opportunity to implement world government, or some other evil design?  Or, is the government testing us on how much we will tolerate government interference in our lives and the suspension of our civil rights?

Yes, the Coronavirus appears to be more infectious than the flu or other viruses, but as the data pours in from all around the world, people are contracting the virus in huge numbers but aren’t showing any symptoms.  The early death rates of 3.4% projected by the WHO (March 3rd) turned out to be way above the actual death rates that now appear to be about 0.5%, or even lower.

So we shut down an entire country of 330,000,000 people, destabilized the economy, threw tens of millions out of work and forced tens of millions more Americans to be locked up in their homes, for a virus with a death rate comparable to other virus death rates.

But what is even worse, in a state of government and media induced fear, the American people laid down and abrogated their God-given natural rights and handed them over to an inefficient, corrupt and negligent government that doesn’t really know what it is doing but is drunk with the power that the virus handed them.  (Can we trust that Anthony Fauci and Deborah Birx really know what they are talking about with such limited data to go on?  Mostly they are guessing.)

There are some protests around the country to the nationwide lockdown but the protests are a token to what they should be if Americans weren’t so docile in their approach to government edicts.  There should be huge marches of tens of thousands of people surrounding every state capitol in America, in a show of INDIGNANT REBELLION.  Is American individual freedom not worth defending any more?  Are we but pawns (or toys) of an all-powerful, central government, dancing to every “song” the government sings?

In response to the threat, government has thrown trillions of dollars at the problem in the form of Federal Reserve actions and massive stimulus handouts by printing phony money, to the tune of about $7 Trillion.  $7 Trillion mind you!  The increase in the national debt and deficit will be with us for decades, probably never to be re-paid.  The potential for a deep depression grows by every day the lockdown is extended.

In defiance of government’s overreach, businesses should open their doors again.  Churches should entice their parishioners to return to the pews.  Public schools should get back to the work of teaching our children.  The people should start congregating with reasonable precautions like the same reasonable precautions they exercise about the flu, colds and other viruses.

Is this reckless?  Some might consider it so.  Those who wish to preserve individual freedom will call it, “give me liberty, or give me death.”

Sure, more people will contract the virus, but most of them won’t know they have it.   Yes, some people will die but the entire population will begin to build up anti-bodies to the disease and thus be protected when the virus strikes again at the next cold and flu season.  Would a vaccine help?  Of course, but that will come in time.  Older people (70’s and 80’s) are more susceptible to the virus and should be protected where possible.

If government can lock up the entire nation, in response to a perceived but questionable threat, in direct violation of the Constitution and the suspension of your unalienable, God-given rights, what else can it do?  Anything it wants ladies and gentlemen!  Anything it wants!

If government can abrogate the Constitution and suspend your rights, it then follows that they can take away your guns, prohibit you from speaking, stop you from peaceably assembling, interfere with the free expression of religion, outlaw the redress of grievances and take over the free press.  (The free press is dead anyway and has become a shill for the Democrat Party)

Like a tyrant King they can tax you to the point of taking everything you own away and leave you penniless and without property.  They can invade your home without a warrant.  They can throw you in jail without a trial.  They can take your life with impunity.  What are you going to do about it?  How are you going to stop them?  The only and final defense against absolute power is armed revolution.

Now you might be thinking that this can’t happen in America.  You are wrong because it has already.  As an example, right now in the U. S. House is Democrat-sponsored Bill, HB 5717, (“Gun Violence Prevention and Community Safety Act”) legislation designed to strip you of your gun rights and virtually repeal the 2nd Amendment through the back door, in direct violation of Article V of the Constitution.

H.R. 5717 would create a national permit requirement to buy a gun, establish a national gun registry, institute a national “Red Flag Gun Seizures” law, ban virtually every semi-automatic rifle in private hands in the country, make it a felony to purchase a “high capacity” magazine, tax firearms at 30 percent and ammunition at 50 percent, provide for jail time for anyone who buys more than one gun in a one-month period, force gun owners to lock up their guns at all times, criminalize the sale of any firearm to a person under 21 (despite a person being considered an adult at 18), ban the sale of suppressors, and make it a crime to construct a gun in one’s own home.

Among the many far-reaching provisions in the bill, Section 803 of the draconian bill, under “Increase in excise taxes relating to firearms,” would amend Section 4181 of the Internal Revenue Code of 1986 to read as:

There is hereby imposed upon the sale by the manufacturer, producer, or importer of the following articles a tax equivalent to the specified percent of the price for which so sold:

Will this Bill accomplish what its sponsors intend it to do, “prevent gun violence?”  In a pig’s eye!  It’s a ruse, a con and a fraud, like most Democrat legislation!  Make no mistake!  Their goal is gun registration and then confiscation.

If this Bill were to pass and signed into law, it would make millions of Americans lawbreakers and make gun ownership so expensive as to render ownership impossible for the average citizen.  It would drive many gun manufacturers out of business, which of course is the Democrat’s plan to take your guns away.

The Bill has no chance of passage now, but what if Trump is not re-elected in November and the Democrats take the House, the Senate and the Presidency?  Remember, this is how we got Obama Care.

What is happening in America today is the direct result of “How Easily Americans Allow Government To Suspend Their Rights“, mostly because they are not paying any attention.