How Obama’s Administration, And Hillary Plotted To Destroy Trump

There was a time when I thought that president Donald Trump should fire special counsel Robert Mueller over his conflicts of interest and his egregious overreach. I now recognize that such a termination would hand the Democrats exactly the media created firestorm they desire.

As I outlined for Infowars and the Daily Caller, the better course of action is for the President to direct the Attorney General to appoint a Special Counsel in the matter of Uranium One.

All four of them are at the kernel of suspected law enforcement corruption that served to facilitate the Uranium One deal by covering up the racketeering activities underlying it.  This corruption was instigated and directed by the then-Secretary of State and her former president spouse, overseen by the sitting president at the time, who ultimately approved the Uranium One sale to a proxy of the Russian state nuclear agency.

With Rosenstein terminated, and Sessions passing the buck, the Solicitor General would be next in the chain of command at the Department of Justice. The Solicitor General is likely to execute the president’s directive and undertake to appoint the Uranium One Special Counsel.

Aside from his involvement in Uranium One, the primary grounds for termination of Rosenstein are his inexplicable and inexcusable disregard of his duty to ensure against any conflicts of interest or improper appearances of personal ties, especially ones as stunning and brazen as are implicated by his own longtime close personal and professional association with his mentor, crony and now-supposed subordinate Robert Mueller. DOJ rules specifically prohibit even the appearance of the conflict of interest. 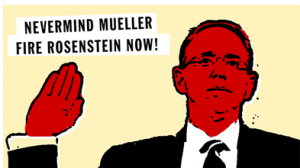 As Robert Mueller’s unaccountable taxpayer-funded lawyer hit squad of Hillary-loving Trump-haters progressively implodes, taking with it the Democrats’ obscene Trump-Russia collusion hoax, it is imperative that President Trump act decisively to assert his constitutional authority as the nation’s chief law enforcer and re-take control of his Department of Justice.

The manufactured turmoil of the last year has made it clear just how deep and damaging has been the long, sordid train of abuses and corruption that took root in the Obama Justice Department under the two most lawless partisan Attorneys General in American history (to include John Mitchell): Eric “The Contemptible” Holder and Loretta “The Tarmac Hack” Lynch.

Holder and Lynch may be gone (no doubt off somewhere cashing in on their government “service”) but the Obama-Bush-Clinton stain that spread most prolifically under their maladministration of the DOJ stubbornly persists.

From all indications, the president is loath to do what so many Trump loyalists and political realists, including myself, have urged him to do and move his largely-limp, undeniably-useless Attorney General Jeff Sessions out to pasture.

Much as this would be a major move forward for the president and his long-term political prospects, whether he sees it or not, it appears that Sessions is firmly and indefinitely ensconced as Trump’s AG.

While Sessions is clearly out of his depth and ill-equipped to root out the lingering vestiges of Obama-Clinton corruption, he is not the worst problem in Trump’s DOJ and also not the official most deserving of removal.

This dubious distinction belongs to the Deputy Attorney General Rod Rosenstein, prime mover in the hasty appointment of the special counsel that has proven to be a nest of partisan opportunism and subversion against the president — and about which Rosenstein has done absolutely nothing, arguably participating in the activities by omission.

President Trump owes it to the country and to the integrity of his Department of Justice to immediately fire Rosenstein, at minimum for Rosenstein’s utter mishandling of the special counsel appointment, for his failure to ensure proper oversight or corrective supervision of the special counsel, in the absence of the recused Attorney General Sessions, and for his flouting of the spirit and letter of the strict rules concerning conflicts of interest and the duty to pro-actively and pre-emptively ensure that no investigation or prosecution risks being tainted by even the appearance of impropriety.

It is not necessary to delve into Rosenstein’s role in facilitating the Obama-Clinton Uranium One treason, as the Maryland U.S. Attorney under whom the Mueller FBI’s investigation into Russian state racketeering and corruption inexplicably (and conveniently for the Clintons) came to naught, to see how Rosenstein is a metaphorical ‘asp in the bosom’ of Donald Trump’s fledgling presidency. 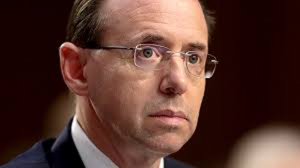 From the moment he was confirmed, Rosenstein’s actions as Deputy AG have demonstrated loyalties not to the nation’s constitutional chief executive, from whom Rosenstein’s office and authority are solely derived, nor to the rule of law, to the extent that the law conflicts with Rosenstein’s ulterior motives as an underhanded deep state manipulator and crony protector.

Rosenstein, with little apparent consideration or deliberation, rushed through the appointment of his longtime legal ally, cohort and mentor Robert Mueller as special counsel. Rosenstein apparently cared not that he would be responsible for overseeing the actions and decisions of a close professional cohort and former supervisor, stretching back to the very beginnings of Rosenstein’s career, as a junior entry-level prosecutor working under Robert Mueller in the DOJ criminal division.

Rosenstein also apparently cared not that Mueller had literally just interviewed with the president to replace the FBI director whom Mueller preceded in office and whose firing prompted the special counsel appointment in the first place, an interview from which Mueller was not offered the job.

One need not think it likely or even probable that Mueller might bear ill will towards the president after not being selected for the job for which he just interviewed without success, to believe that the mere appearance of possible animus resulting from this failed interview is enough that Rosenstein should have moved on to any of the 1000s of other lawyers who could very competently and ethically serve as special counsel in this instance.

To cap off Rosenstein’s sloppy, hurried, ill-conceived appointment of his old pal Robert Mueller as special counsel, Rosenstein was reported shortly after as opining that he might have to recuse himself from the matter due to his role in writing the memo that the president relied on in deciding to fire James Comey as FBI director.

If Rosenstein had such misgivings, they certainly would have come up at the outset, and should have prompted him to recuse himself BEFORE appointing a special counsel, rather than be the subject of navel-gazing rumination weeks AFTER he already acted to appoint his old legal crony to investigate political allegations against the newly-inaugurated president who appointed him to present office and whom Rosenstein arguably prompted to take the action that directly led to Rosenstein’s appointing the special counsel that has developed into a tainted partisan cabal right under Rosenstein’s nose.

The mess that Rosenstein has made of this affair, his negligence in overseeing the special counsel, at least enough that it would not be staffed with rank partisans, much less a longtime professional crony who was very much steeped in FBI and DOJ affairs and internal politics, and his failure to come clean about whether or not the FBI or DOJ were complicit in the abuses surrounding the infamous Steele Dossier are each reason enough to terminate Rosenstein, and with good cause, irrespective of the political repercussions possible for the president.

Because it was impossible for President Trump to reverse James Comey’s ham-handed, if not underhanded, mishandling of the investigation of Hillary Clinton’s national security crimes or to countermand Comey’s subsequent maneuvering to perpetuate the phony Trump-Russia collusion fantasy, Trump had no option in dealing with Comey’s misconduct but to fire him.

The President is in the same position now with Rod Rosenstein, unable to reverse the mess Rosenstein has created in the tainted Mueller hit squad, leaving him (the president) only the option of terminating Rosenstein to deal with the root of the problems Rosenstein has caused by failing, if not refusing, to adhere to the ethical requirements imposed on such consequential official decisions as he made in appointing a legal hit squad to chase loose allegations made against the president by his political enemies.

Although the leftist lawyer hive mind has been rumbling about doing anything and everything to protect and preserve the inside man, witting or otherwise, that they have in Rod Rosenstein, they have little more than their own hysteria and bluster to protest the president’s firing of Rosenstein.

Cynical leftist lawyer smear artists and Democrat partisans may have been able to intimidate and menace the president into not acting to remove Robert Mueller, despite blazing examples of underhanded partisan animus and serious conflicts of interest that only recently came to light.

But their exhortations should fall on deaf ears as it concerns the president’s absolute prerogative to remove his own appointee, one who has proven to be just another troublesome government lawyer who can’t help but serve his cronies and his tribal loyalties, above all else.

The President should not hesitate for a moment in firing Rod Rosenstein and the sooner, the better.