How Would Muslims Take Control Of America?

They do it first by establishing mosques in every town and city. These meeting places are perfect warehouses of not only indoctrination but future terrorists, who are made to read and understand the principles of Jihad, martyrdom and Dar-al-Harb (“land of war”-anyplace not Islamized).

Mosques cost money, and the money for these warehouses of hate is coming straight from Saudi Arabia. These mosques are being infused with an activist strain of Islam, Wahhabism. If you have to ask where the Saudis are getting their money, you are not paying attention…it’s coming from you. According to a National Portrait, a survey released in April 2001, there were at least 1,209 mosques in the US, but today it’s estimated that number has quadrupled.

Mosque elders tend to be sent to the US with one clear mission: Make Sharia law the supreme rule within the United States, using any and all tactics necessary. Next, from within the safety of their local mosques, they begin to use their revolting practices, riotous youth, and wild sermonizing to force genteel Americans to relocate to safer, less threatening neighborhoods and cities. Of course, not all Americans will move or can afford to do so. And to take control of a town, Muslims will not need to evict everyone. They probably need about 25% in order to make life very unpleasant for those who do not go along with their demands. 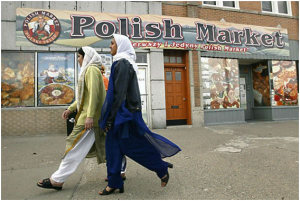 They will elect Muslims to all positions of local influence, who will create and enforce policy according to the Quran. Once they have control over a town, they will begin to establish informal Sharia, and there’s nothing the government can (or will want to) do about it.

Sharia is the brutal means by which Islam controls its populations by force, intimidation, and punishments for offenses to Allah. Already, in many European countries, national governments have, out of fear, given Islamic fascists the right to establish their own shadow governments within the borders of countries like Sweden, Belgium, Denmark, Germany, France, and England, where they can control their own populations without accountability. Proposals for Sharia are being taken seriously by Canada.

This is an admission that Islam is not just a religion. It is a cult. It seeks total control over a person’s mind and body. And, as such, our Constitution is totally incompatible with it. They will push politicians for local control and self-determination of their own laws. In this way, America will become two nations: a weakened traditional one, and a growing, menacing Islamized one.

At the same time, Muslims will ally with leftist politicians who will gladly cede some of their power to this group of enforcers, so conservative politicians and Christians who advocate self-defense and sane social policies are kept out of office. Money that was once used to build mosques will now be used to buy politicians. On university campuses, Islam will be portrayed as righteous and peaceful, while Christianity will be associated with evil Western and American values. Rebellious American youth will eat it up (BLM, OWS, Antifa, etc.).

There will be increasing local and regional incidents of crimes and threats against Christians, Jews, and anybody who speaks out against the religion of hate. Terrorism is a completely legitimate tool of Islam and was widely practiced and advocated by Muhammad. Remember, all words in the Quran are perfect, immutable laws defining an eternal ethic:

“Against them (the unbelievers) make ready your strength to the utmost of your power, including steeds of war, to strike terror into (the hearts of) the enemies, of Allah and your enemies, and others besides, whom ye may not know, but whom Allah doth know. Whatever ye shall spend in the cause of Allah, shall be repaid unto you, and ye shall not be treated unjustly.” —Quran 8.06

Leftist politicians will continue to hold the Bill of Rights over anyone who dares to accuse this religion of wrongdoing. While crime and threats skyrocket, Islamized citizens will ignore the wrongdoing. They will look the other way for fear of retribution, honor killings, and punishments from those who uphold the Islamic requirement to seek revenge on anyone who dishonors or disagrees with Islam. 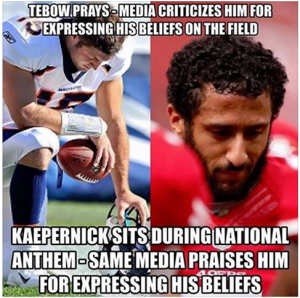 Eventually, America will become weakened and politicians will allow the Muslims to do whatever they want, as long as the infidels are allowed to be free of terrorist threats. As Christianity wanes, people will reject it as an anachronism that is irrelevant to modern trends. Islamic ethics will prevail and Muslim sects will gain members, money, and influence.

Islam Will Destroy Our Constitution

As government policies lean toward Islamic ideals, the Bill of Rights will be seen as archaic and out of touch with contemporary values and the new direction of the country. It will be just a piece of parchment in a museum, lacking anyone who would be so bold and revolutionary as to fight against a religion, even a religion of hate.

Regrettably, a vast ignorance prevails in this sphere. Academic pundits, leftist journalists, and hired Islamic apologists, useful idiots, proclaim that Islam is a religion of peace and that the great majority of Muslims are not a party to any plans and actions of radicals.

Islam is Irreconcilable with our Culture

So how do we stop this sequence of events? How can our government, which has so effectively protected the rights of peaceful religions, protect us from an aggressive one? How should we put Islam out of business?

By massive allocation of an educational campaign while simultaneously declaring Islam for what it is. An ideology irreconcilable with our core beliefs enshrined in the universal declaration of human rights, the United States Declaration of Independence and Constitution. By treating Islam, the way we treated Nazis, Ku Klux Klan, Maoists. By preventing Islamization of our country by all legal measures and staunchly resisting the creeping sharia in our society.

Perhaps it is time to realize that not all religions are the same. If a religion does not recognize the constitutional rights of others, it must lose its rights under First Amendment protections. If it seeks to control all aspects of our life by force and fraud; if it seeks exemption from national laws protecting constitutional rights, then it must not be considered a religion.

It must be called something else, and it cannot be recognized as a protected ideology under the First Amendment.

“Love your enemies, bless them that curse you, do good to them that hate you, and pray for them which despitefully use you, and persecute you.” Bible (Matthew 5:44)

Any religion or dogma that seeks to create its own government, its own legal system and seeks to mobilize its own militia is itself not interested in separation of church and State and has no right to use that separation to create hegemony. In fact, such a doctrine is not even a religion at all. It is a totalitarian regime and must be considered the enemy of everything Americans believe in.

I’d welcome an inspection of other religions to determine if they are truly peaceful, and I am confident all other faith will remain protected and unaffected because religions are by definition peaceful. There is only one faith which seeks global hegemony for a seamless church-state government and imposition of its law everywhere and that’s Islam.