ICE and Border Patrol Warn:  Illegal Aliens Are Dangerous in More Ways Than One

Border Patrol officials and Immigration and Customs Enforcement special agents have been doing their best to handle what appears to be a tsunami of illegal migrants at the U.S. borders especially its southern border.

These two important but hated law enforcement agencies – part of the enormous Department of Homeland Security (DHS) — are dealing with the good, the bad and the ugly who are trying to come to the U.S. to pursue their dreams, their fortunes and their access to the liberals’ trough of free housing, free food, free healthcare and other free concoctions created by Democrats seeking their votes.

While leftists in the U.S. attempt to tie immigration exclusively to Latinos, many immigrants sneaking into the U.S are not from, Mexico, Central America and South America. They come from as far away as China to enter our country, and therein lies the problem since China is the nation of origin for the Coronavirus.

About 330 immigrants from China have been caught attempting to cross American borders illegally so far this year, according to Homeland Security. In addition, three other people from South Korea — another country with rapidly spreading cases — have also been arrested at the border, as have 122 people from the Dominican Republican which shares a Caribbean island with the already enormously impoverished Haiti. 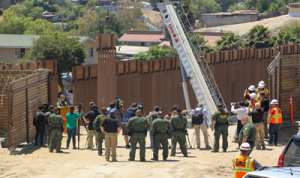 But it is our southern neighbor that is responsible for more than 1,000 migrants a day who are nabbed attempting to sneak into Texas, Arizona, New Mexico and California illegally from Mexico, in which Mexican authorities detected its first case last week, and this week police and medical departments identified five other cases of the deadly virus..

And if that many are being caught each day, an unknown but significant number are getting through undetected, Border Patrol officials say.

With “tremendous pressure on our borders… and a sustained attack on election integrity,” “our Republic is tottering,” Tom Fitton,  the CEO of the nonprofit, nonpartisan government watchdog, Judicial Watch,  warns

To this point, Fitton argues that while the “attack on the Republic has been a low-grade fever for the last 20 years,” it has “metastasized” under President Trump.

According to Fitton, the Democratic Party’s anti-constitution activities intensified in 2016 when Trump’s opponents in the Obama Administration “put their thumbs on the scale” for Hillary Clinton’s campaign, engaging the highest levels of national intelligence agencies in a politically “coordinated campaign” against Donald Trump.

Uncovering the Clinton email scandal, Judicial Watch shed light on the secretary’s alleged misconduct in 2016, “shaking” her campaign, which while not being the intent of Judicial Watch’s investigations, was an inevitable result of those emails being “hidden” until 2016, Fitton claims.  On the topic of election integrity, Fitton underwrites the necessity of “clean elections to ensure that elections aren’t stolen.” Today, most states lack any real Voter I.D. and citizenship verification, and the “10-11 states” that do are being “vociferously opposed by the Left.”

Today, even though “the Mueller investigation failed” the attacks on our Republic continue, with “the coup-cabal… making up this concern about Ukraine,” Fitton confirms. “Concocting the Ukraine smear,” he continues, “the coup… hijacked Congress and abused the House of Representatives, abusing the power of impeachment in ways never seen before.” Ultimately, the impeachment effort was “an attack on the Republic, the Presidency and your right to govern yourselves,” Fitton concludes.

“The activists and politicians he U.S. border puts migrants in poor conditions,” a Homeland Security official told The Washington Times. “We don’t know if they have come into contact with someone who has the flu, there is no passport, medical history, or travel manifest.”

“The individuals that are coming in at our 11 airports that are being funneled, we have very good information of their travel history, of their medical history. We’re not going to have that same set of fidelity for the individuals if this continues to grow at the southwest border,” Wolf said.

Mr. Wolf also said the spread of the virus in Mexico creates new complications, after the U.S. has forced tens of thousands of asylum-seekers to wait in that country while their cases are proceeding in American immigration courts.”