Home/Opinions, September 2022/If Disney is “Woke” may I sleep forever

If Disney is “Woke” may I sleep forever

I am so thankful that my children are grown and were exposed to very little of the Woke world (comparatively speaking). Back then, it was political correctness which hadn’t reached even close to Woke yet! But we are well down that road. Back when political correctness was getting a foothold, it got under my skin enough to tell a Sacramento Bee reporter that if anyone accused me of being politically correct, I’d slit my throat. You can imagine how I view the Woke world now.

“Give me four years to teach the children and the seed I have sown will never be uprooted.” —Vladimir Lenin

“Our strength, in other words, has rested in our determination to reject simplistic absolutes and to redefine and revitalize a productive middle ground, relinquishing outdated solutions and embracing new approaches”. —Hillary Clinton, It Takes a Village 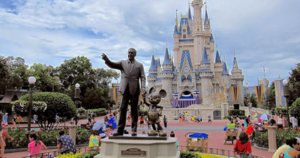 What are those simplistic absolutes? They are moral absolutes, the opposite of evil, wrong, sin, and hate.

Disney has gone ballistic over a piece of Florida legislation that prohibits state teachers from introducing or promoting LGBT topics to children in kindergarten through 3rd grade. The Christian lifestyle and moral absolutes are banned in schools, so the Left are replacing them with the most disgusting, degrading, despicable behavior the world has seen to date. Nero could take lesions. Parents are, and should be, the arbiters of what is fed to their open, receptive, and not yet discerning children’s’ minds.

But in this world where being white is being racist, where possessing moral absolutes is to be shunned as antiquated as well as racist; and where being tolerant only denotes those who believe in LGBTQIA2+furries, pansexuals and anything other than heterosexuals is acceptable.

They can have their parades, and we have the option to stay away. But keep your trannies out of our schools and libraries – if they were just reading books to our children, we wouldn’t notice. But they are doing their grooming (and I don’t mean combing their hair and putting on make-up) of our children and flouting it on mainstream and social media. There is now a big push to more than normalize this sick and twisted, debased, corrupt behavior – and to inject it into our children’s psyche.

Disney General entertainment president Karey Burke vowed to “up the ante on gender politics during an all-hands meeting, promising that at least half of the characters in its productions will be LGBTQIA or from racial minorities by the end of the year. On during a company-wide Zoom call, she said that Disney must do more to be more inclusive. She (he, it?) choked up during it, saying the issue hit close to home because of her children. ‘I’m here as the mother of two queer children, actually, one transgender child and one pansexual child, and also as a leader’”.

Disney LGBTQ advocates attacked the company for failing to block a Florida law that banned classroom instruction on sexual orientation and gender identity in grades K-3. So Disney vowed to overturn the law, adding that they would work to increase the number of LGBTQ characters in future productions. So, Disney higher-ups, determined to retain their great ESG credits, responded: “Our goal as a company is for this law to be repealed by the legislature or struck down in the courts, and we remain committed to supporting the national and state organizations working to achieve that.” [i]

For the unaware, this is “woke capitalism” (progressive-slanted corporate lobbying) at work. You may wonder what Environmental, Social, and Governmental (ESG) actions are valued in companies? Well, the above actions are high on the list.

In 2018, Ross Douthat, opinion writer for the New York Times, wrote, “Corporations engaged in a “certain kind of virtue-signaling on progressive social causes, a certain degree of performative wokeness “efforts to tax or regulate our new monopolies too heavily.” [ii]

Now that Disney has demonstrated ESG valuations so well, I wonder if we won’t — finally – see a much-deserved backlash against such nonsensical values in determining what a company is worth. If we don’t see backlash to this, we might as well crawl into caves and wait for the Rapture.

One of the Disney companies produced the movie Little Demon, wherein “13 years after being impregnated by Satan, a reluctant mother, Laura, and her Antichrist daughter, Chrissy, attempt to live an ordinary life in Delaware, but are constantly thwarted by monstrous forces, including Satan, who years for custody of this daughter’s soul.”

In conjunction with the movie, “After School Satan Clubs” are being set up. School boards must allow all groups proposed; this is a First Amendment issue. These clubs are the brainchild of a pro-abortion advocacy group, The Satanic Temple, which regards killing unborn babies in abortions as a religious ritual. One can easily see where this leads to – abortion at any age after birth up to 95 (grannie may run out of money).

What to do? Parents, get your children out of the public (Marxist) schools. The Satanic website notes, “After School Satan Club[s]” are needed to provide a “contrasting balance” to after-school activities at some schools.” Those activities that need “to be contrasted” must be Christian clubs. What else does Satan detest; Satan is only a contrast to Jesus and Christianity.

And Wall Street Journal’s Gerard Baker, has the best take on Disney deciding to go for woke. Baker’s mockery is fine-tuned and right on.[iii] It’s easy to mock, but when a company whose products have entertained, enlivened and enriched the lives of billions of children and their parents decides it must take a stand against the Parental Rights in Education Bill, what does it expect? By joining in the campaign to distort the objective of Florida’s new law, defame the people behind it, and deprive parents of the right to determine whether their children as young as 5 should be taught about sexual orientation or gender identity in the classroom, Disney executives invite something much worse than ridicule. They risk placing themselves on the side of a small minority of unrepresentative ideologues who are trying to remake the relationship between children, their parents and their teachers.

The larger problem Disney’s dutiful obeisance to the noisy extremists represents is the way in which those who seek to control our culture are redefining a central element of democratic pluralism—what it means to be an open and tolerant society.

“In March, Disney’s president of content told employees the company plans to have at least 50% of its regular characters come from “underrepresented groups.” Another top producer boasted about Disney’s “not-at-all-secret gay agenda,” including “adding queerness” to children’s programming. Yet another senior executive promised that Disney would implement a “tracker” to ensure programs contain enough “canonical trans characters.”[iv]

I’m sure the pope is sending consultants to see they get the dress and verbiage correct. If, when you started reading this, you thought I was steaming, you were right. It is time for every right-minded citizen to wake up and condemn the woke.