If January 6th Had Been a Real “Insurrection”

…Not a single anti-American socialist democrat would remain in DC power today. Half of the republicans who are actually democrats in RNC disguise, would be gone as well. 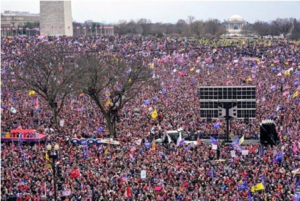 This alone proves that the events of January 6th, 2021, had nothing to do with any “insurrection” or attempt to “overthrow” the government. It also proves how just such a show of unified indignation, scares the living hell out of every evildoer in DC. They NEVER want to see anything like this ever again.

AND…they sure aim to disarm every decent, honest, productive, law-abiding American Citizen, before such a gathering happens again!

Still, socialist democrats are wasting more taxpayer money with yet another wild witch hunt, with a blatant clear intent to simply make it difficult for Trump to ever seek office again, or for the people of the USA to ever execute their Right and Duty to remove from power, a government which is destructive of freedom, liberty, sovereignty, and security.

Since June 16, 2015, when Trump rode down the escalator to announce his political bid for the Oval Office, far left democrat lunatics have tried everything under the sun to destroy Trump, his family, his businesses, and his future. Repeated attempts all failed miserably, time and again. Every effort was instead, proven to be a pure political witch hunt based on false accusations, backed by fake evidence, solicited, and paid for by the Hillary Clinton Campaign and the Democrat Party.

Yet here we are again! Because it’s entirely impossible to sell January 6th events as any “insurrection” with a serious face, or even a “riot” by BLM and ANTIFA standards, congressional democrats have stopped using the term “insurrection” in their latest fake investigation, hoping many Americans will at least accept the equally false term, “riot.”

Most recently, the Biden regime arrested Dr. Simone Gold, leader of the Frontline Doctors group that has been spreading the TRUTH about COVID19 with thousands of other honest doctors, nurses and scientists.

UNDERSTAND: There is no proof at all that a single life has been saved by any of the COVID19 “vaccines.” No one can “prove” why someone didn’t die. However, there is a mountain of growing evidence that thousands or maybe millions of lives have been lost or ruined as a direct result of the so-called “vaccines.” The new “Sudden Adult Death Syndrome” is the new label for vaccine related deaths.

Dr. Simone Gold and thousands of other reliable medical professionals from all over the globe have been proven right. Gold was simply speaking truth at the Trump Rally on January 6th. Christopher Cooper, U.S. district judge for the District of Columbia, sentenced Gold on Thursday to a 60-day prison term followed by 12 months of supervised release and ordered her to pay a $9,500 fine. Cooper was appointed to the bench by Barack Hussein Obama and is merely a rubber stamp for Obama’s political prisoners.

Likewise, evidence has shown that “mass-shootings” only happen in “gun-free zones,” where the criminal shooter is the only person armed. It’s therefore counterintuitive to suggest that disarming all legal lawful citizens can solve the problem.

As I finish this piece for release, the US Supreme Court just issued a ruling against New York’s effort to continue disarming their lawful citizens.

“In this case, petitioners and respondents agree that ordinary, law-abiding citizens have a similar right to carry handguns publicly for their self-defense. We too agree, and now hold, consistent with Heller and McDonald, that the Second and Fourteenth Amendments protect an individual’s right to carry a handgun for self-defense outside the home,” Justice Clarence Thomas wrote in the Court’s opinion. “Because the State of New York issues public-carry licenses only when an applicant demonstrates a special need for self-defense, we conclude that the State’s licensing regime violates the Constitution.” (SOURCE)

Now, in the case of the picture above from January 6, 2021… this picture is worth at least a billion words! Imagine if all of those people had been a part of any “armed insurrection” or even a BLM-ANTIFA riot… No one could have stopped them from doing anything they wanted to do that day, especially since House Speaker Pelosi had declined any special security measures offered by President Trump for that day.

No, there was no insurrection and no riot in DC on January 6, 2021. But these facts have had no impact at all on yet another expensive DNC circus stunt intended to mislead millions of Americans into voting themselves and everyone else back into bondage, under the false propaganda aimed at destroying Trump and every Trump supporter.

The picture tells all that needs to be told on the matter. This many armed angry Americans could have overthrown the DC criminal cabal that day if that’s what they had set out to accomplish. No one could have stopped it.

So, what are WE going to do about the continued open fraudulent assault on innocent freedom and liberty loving Americans, playing out on pretty much every news network, all of whom know the truth? Without the frauds in Congress and their lying minions in the news media, none of this could be happening. Without severe consequences for their actions, this is the new norm in the USA, an entire federal government and news media weaponized against every American citizen who dare to disagree.

Are YOU willing to accept these unconstitutional new norms for yourself, your loved ones, and all future generations? If you’re not, then it’s time to stand together against blatant unconstitutional tyranny from the halls of our own illegitimate government. According to our Charters of Freedom, such a government has no lawful right to exist…