“If men within themselves would be governed by reason, and not generally give up their understanding to a double tyranny, of custom from without, and blind affections within; they would discern better what it is to favor and uphold the tyrant of a nation.  But being slaves, no wonder that they strive so much to have the public state conformably governed to the inward vicious rule, by which they govern themselves.  For indeed none can love freedom heartily, but good men: the rest love not freedom, but license: which never hath more scope, or more indulgence than under tyrants.”  —John Milton, English poet and intellectual (1608 to 1674)

Many times we have written that men without honor are incapable of defending, much less preserving, freedom.  As John Milton says, “For indeed none can love freedom heartily, but good men. ” Good men with honor.

Honor is “the adherence to what is right or to a conventional standard of conduct.”  In simple terms, the “conventional standard’ of conduct for humans is “to treat others in the same way you wish to be treated and to be true to your word.”  Without honor there can be no trust and society eventually breaks down into corruption, chaos, anarchy, or worse, fascism as we are seeing now in many parts of the country today.

Thomas Jefferson wrote: “When we come to the moral principles on which the government is to be administered, we come to what is proper for all conditions of society.  Liberty, truth, probity, honor, are declared to be the four cardinal principles of society.  I believe that morality, compassion, generosity, are innate elements of the human constitution; that there exists a right, independent of force.” 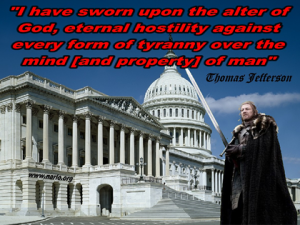 Freedom will be preserved and tyranny vanquished as long as there are good men with honor who will pledge that honor, their lives and their fortunes in the name of freedom.

“These are the times that try men’s souls: The summer soldier and the sunshine patriot will, in this crisis, shrink from the service of their country; but he that stands it now, deserves the love and thanks of man and woman. Tyranny, like hell, is not easily conquered; yet we have this consolation with us, that the harder the conflict, the more glorious the triumph. What we obtain too cheap, we esteem too lightly: it is dearness only that gives everything its value.”

So today, we must ask ourselves in a time of our own conflict, confusion and turmoil, how “dear” is freedom?   What price do we put on its defense?  Are we the summer soldier or the sunshine patriot that, in crisis, shrinks from the service of country?  Or, are we who stand by it now, the vanguards of freedom, will, in the end, be its savior?  But if there not be enough of us who stand steadfast for freedom, will the summer soldier or the sunshine patriot come out of the shadows to join the battle?  Or will they wait until the loose chains that bind them are tightened and locked forever and freedom becomes but a dim, retreating memory?

In a portion of a poem we wrote several years ago, we described freedom thus:

You can’t see freedom
You can only be free.
You can’t touch freedom,
It’s a phantom you see.

A phantom we hold
In our hearts and minds.
A fleeting memory we are told,
Should we it let slip away,
On the winds of time.

In reality, Americans are letting the phantom of freedom “slip away on the winds of time.”

The experiment of American freedom is approaching a precipice, where even the summer soldiers or sunshine patriots are hard to find and just a handful of the “Vanguards of Freedom” exist to remind us all that the price of freedom is truly eternal vigilance.

Freedom has become passé, old hat and out of date.  Soft socialism has taken its place in the hearts and minds of millions of Americans, mostly who live in big cities.  Hard socialism is warming up in the wings under the guise of “better” government, as described by socialist “Bernie Sanders.”  This freedom “phantom” doesn’t seem to fit with our complex, complicated and fast-pace, high-tech lifestyle any more.

Many ask, how could we possibly unravel the millions of laws that have been passed in the last 100 years that have tightened the government noose around our necks?  After all, we must take care of the sick, the aged, the infirmed and all the able-bodied men and women (including illegal aliens) that line up at the government pig trough.  So what if our Constitution never listed or allowed such an action as an authorized power of government.  The Constitution is essentially dead anyhow ….. isn’t it!

And now that the environment has become an inviolate religion, how can we even consider undoing the propaganda, lies and distortions that are being crammed into the heads of consenting adults by the media, as well as the innocent minds of our K-12 school and college-age children?  Certainly, it is quite apparent to almost everyone that protecting the environment is much more important than complying with all those ancient, antiquated principles of freedom and property rights, in our dying or dead constitution ………….. isn’t it?

Oh contraire!  If we do not roll back the insanities and the injustices that have eroded our liberty and freedom, or their memories, we will eventually die and henceforth, never to rise again, being replaced by a top-down, elite-run, tyrannical, one-world-order socialists and communists.  We will become the incarnation of the Old Soviet Union.

As Thomas Paine also said: “tyranny, like hell, is not easily conquered; yet we have this consolation with us, that the harder the conflict, the more glorious the triumph.” We can assure you that the conflict, the enemy we face today, may be much harder and much more intractable, than a simple Revolutionary War, where today the enemy we face, is the enemy within, not a foreign power!   Americans have become unintentional murderers of their own freedom.

Nevertheless, like the Thomas Paine’s of the Revolution that secured our freedom, the “Vanguards of Freedom” are still with us.  They are the scouts who sound the early-warning alarm against the enemies who would steal our freedom outright by an act of war, martial law, or by domestic stealth, using the un-substantiated, mythical rationale of maintaining our security for us, or listing polar bears as endangered when they are not, or putting us in chains and taxing us to death over climate change, based on our collective guilty conscience for “injuring” the planet with our greedy and ostentatious CO2 output.  Absurd!  Ludicrous!  Lies!   (See: “Climate“)

These vanguards of freedom are the ones who warn us with the “one-if-by-land” or “two-if-by-sea” in the Old North Church.  They are the cry in the wilderness for the phantom of freedom. They will, if necessary, pledge their lives, their fortunes and their sacred honor to preserve, protect and defend their freedom and yours, as did our Founding Fathers. The question is, will the summer soldier or the sunshine patriot come out of the shadows to help the vanguards hold onto the flag of freedom?  How “dear” is their freedom and are they willing to pay the price?  History will eventually reveal the truth.

We are one of those men that has “sworn on the alter of God, eternal hostility against every form of tyranny over the mind [and property] of man.” We believe that freedom still lives in the hearts and minds of tens of millions of good, honorable Americans.  We also believe that “if just one man defies tyranny, freedom still lives.”  But if freedom fails in America, all of humanity will be in dire risk of planet-wide enslavement.

In furtherance of our sworn oath, we are establishing the national “American Patriot Reserve Force,” a force that lies percolating and alive underneath the fabric of society, waiting for the time when they will be called upon to rise up by the millions to execute the solemn pledge of the Declaration of Independence ….. to Save the USA, freedom and perhaps even humanity itself.

Empty hyperbole you say?  It takes only a few seeds to plant a garden.  We’re planting those seeds.