Home/June 2018, Opinions/If The Politicians Want Un-Constitutional Wars, Then Let’s Send Them! This Is How The Wars Will End

If The Politicians Want Un-Constitutional Wars, Then Let’s Send Them! This Is How The Wars Will End

“War is delightful to those who had no experience of it.”  —Desiderius Erasmus

First and foremost, I come from a military family.  My grandpa was in World War I, my uncles were in World War II, my Father was in Korea, my cousin was killed in Vietnam and my brothers were in the US Army and Air Force.  So, without a doubt, I honor the American military, but let’s be clear here, in righteousness, not in unrighteousness (Isaiah 51:4).  I honor those that magnify the enumerated laws found within our US Constitution, not those who blindly follow behind corrupt politicians and fight for their unlawful ends.

Ever since I can remember (I am sure you do as well), corrupt politicians in this country have been at war with other countries. I have seen war after war after war, decade after decade.

I wonder if those who were doing the fighting would be fighting at all had they taken the time to know the US Constitution, which reveals what and who they are fighting for (Romans 3:20).  For the most part, the wars above are unconstitutional and illegal. 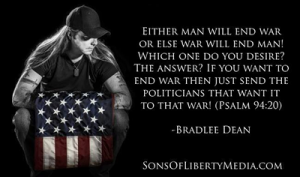 America has been at war 93% of the time since it’s inception, that is 222 years out of the 242 years since 1776. The United States has been at peace for less than 20 years since its birth.

Notice as to whom is doing the fighting?  Your Grandpas, your Fathers, your brothers, your cousins, your neighbors or perhaps your mothers, sisters or even yourself, etc.

Guess who is not doing the fighting?  The politicians who are working on the behalf of the special interest groups such as the bankers, Military Industrial Complex etc..  In short, they are those who are responsible for creating the wars!

To be quite frank, I am sick and tired of the lies (Remember, truth is always the first casualty in war) thrown on the American people in order to fight their un-Constitutional wars. Who do you think is funding these wars? The American taxpayers are!  Then those who began the wars end up profiting from them.

Politicians, of course, with the help of the CIA-controlled media, are lying to you on a daily basis.  They are the very ones that are accusing and casting into the minds of Americans, that the leaders of other countries are dictators, that they are evil and monstrous and must be dealt with or else.  All the while, these same politicians are hoping that you forget that they are the ones who are consistently lying to you.  They are also those who will not raise a hand to help in the war that they created and want you to believe is a just war.

Maybe the American government (We the People) should judge within before judging without! (1 Corinthians 5:12-13)

This government sends innocent boys over to fight their unconstitutional wars in a third world country, while they are given a pass, as they commit the same crimes against Americans here in the homeland.  Hypocrites! (Matthew 23:3)

Hopefully, this will explain as to why so many foreign countries hate America.  They hate America because of what Americans have let their representatives do to their perspective countries unlawfully.

I say that if politicians and special interest groups want war, then let’s throw them all in a cage and fight it out to the death.

If they claim that that is absurd and ridiculous, then you will know that it is not a war worth fighting.

This is why it is important, regardless if you are in the US military, the police force, civil government or in any other capacity of a representative government, to know what the US Constitution says.  We should all follow the reference as to what is legal and what is illegal (Exodus 20) in the sight of God, first and foremost, and unto men (1 John 5:2).

Those that serve “We the People,” in any capacity, must remember what they swore in their oath to uphold:

“I, (Name), do solemnly swear (or affirm) that I will support and defend the Constitution of the United States against all enemies, foreign and domestic; that I will bear true faith and allegiance to the same; that I take this obligation freely, without any mental reservation or purpose of evasion; and that I will well and faithfully discharge the duties of the office on which I am about to enter. So help me God.” -5 U.S. Code § 3331 – Oath of office/Deuteronomy 23:23

Notice that when swearing the oath to serve “We the People,” it states both “foreign and domestic;” domestic meaning here in America, such as unconstitutional and unlawful enforcements here that go against our Constitution.  Unlawful enforcements such as illegal searches and seizures and door-to-door disarmament, etc. are all illegal!

These orders are illegal and the individuals that gave such orders are to be lawfully dealt with (Article 2, Section 4, US Constitution).

So, it is important to know who and what you are fighting for rather than just blindly falling in line with that which may be illegal again, both here and abroad.

During the Vietnam War, it was widely circulated that the politicians were very eager to send America’s finest, whose names came up during the draft lottery, that is until their children’s names were pulled up.  Then, the war soon ended.

It is true that a politician is willing to lay down your life and the lives of others for his country.  Yet, not when it comes to his own life or the lives of those close to him.  If that be the case, which it has been so many times in the past, their un-Constitutional orders MUST BE RESISTED!  When the law is obeyed, they cannot have another unlawful and unconstitutional war.

If everyone catches onto the point being made here, not only will the illegal orders to go to war be RESISTED AND DENIED, but the American people will also lawfully deal with the corrupt politicians. (Article 2, Section 4, US Constitution)

“Of course the people don’t want war. But after all, it’s the leaders of the country who determine the policy, and it’s always a simple matter to drag the people along whether it’s a democracy, a fascist dictatorship, or a parliament, or a communist dictatorship. Voice or no voice, the people can always be brought to the bidding of the leaders. That is easy. All you have to do is tell them they are being attacked, and denounce the pacifists for lack of patriotism, and exposing the country to greater danger.” — Herman Goering at the Nuremberg trials

Again, I say then that if the politicians want war, let’s send them to war, for you know as well as I do that will be the very method in which war will cease.

How is it that anyone can fight on the behalf of those that kill, steal, and destroy for profit (John 10:10) and advocate for war when you know that they are lying to you?

Listen to what these men had to say of our American military (Our grandpas, our fathers, our uncles, our brothers, our neighbors, our mothers, our sisters etc). Former National Security Advisor and former Secretary of State Henry Kissinger said”:

“Military men are just dumb stupid animals to be used as pawns for foreign policy.”

“Our boys were sent off to die with beautiful ideals painted in front of them.  No one told them that dollars and cents were the real reason they were marching off to kill and die.”

“I spent 33 years and four months in active military service and during that period I spent most of my time as a high-class muscle man for big business, for Wall-street and the bankers.  In short, I was a racketeer, a gangster for capitalism.”

And this all coming from the General that said, “I wouldn’t go to war again (After knowing what was going on within) as I have done to protect some lousy investment of the bankers.”

There are only two things we should fight for, one is the defense of our homes and the other is the Bill of Rights.

Maybe this explains why America has 700 military bases in over 146 countries.

Often, wars are fought without congressional approval, and why?  Because they know that if the people knew the truth of the matter, they would not approve of such measures and fight.

Don’t forget that those that do their bidding in un-Constitutional wars are just as guilty as them that are giving the unlawful orders.

When the American people realize who needs to be lawfully dealt with, they are going to find that the problem is in Washington D.C. rather than some created cave-dweller with a turban on his head in a third world country.

Furthermore, when our forefathers, who established this country, thought war was inevitable, they were the first ones to go as an example to the rest of the people.

It was said of George Washington that he was, “First in war, first in peace, and first in the hearts of his countrymen.”  Today, the opposite is true of those who represent the people.

Again, since when are the police, military, and representative government suppose to follow unconstitutional orders? They are not!  And if the unconstitutional orders are not followed through with, the innocent will not be violated, but protected.  This is the rule of law that reigns supreme (Deuteronomy 5:7-21).

This is the reason why the American people should take the time and read the enumerated laws found within the US Constitution.

When John the Baptist was demanded upon by the soldiers, they asked him, “And what shall we do? And he said unto them, Do no violence to any man, neither accuse any falsely; and be content with your wages”  (Luke 3:14).

What do the warmongers in America advocate for? Just the opposite of what the Word of God teaches.  They advocate violence and lies to gain profits.

Either man will end war or else war will end man! Which one do you desire?  The answer?  If you want to end war then just send the politicians that want it to that war! (Psalm 94:20)