Home/December 2017, Opinions/If You Ain’t Mad Yet, You’d Better Get Mad

If You Ain’t Mad Yet, You’d Better Get Mad

It is difficult to describe how we felt when we learned that Kate Steinle’s killer would only be charged with a “felon in possession of a firearm,” a low level beef at best, considering the severity of the crime he committed in snuffing out Kate’s life on a San Francisco pier, at the dawn of her adulthood.  We suddenly grew red faced with the raw emotions of anger, incredulity and disbelief.  In short, we were mad as Hell!

If a man steals a car and then runs over a person (even accidentally) and kills that person, he will be tried, convicted and sentenced under an involuntary manslaughter charge, plus car theft.  Kate’s killer was a felon in possession of a firearm, which resulted in the death of an innocent bystander.  That by definition is involuntary manslaughter.  There was no question that the bullet came from the gun that the killer fired that killed Kate Steinle, whether accidental or not.  It made no difference that the bullet ricocheted off the concrete.  The killer’s illegal action led to the death of another person.  He should have been punished with many years in prison, if not executed.

But he wasn’t. Shockingly, a San Francisco jury acquitted him.  The jury was not allowed to see his many drug convictions or his five deportations, even though that was material evidence that led to his character and being in the country illegally.  The fact that the killer was given sanctuary in San Francisco under their Sanctuary City policy was also not admitted into evidence.  The fact that he was roaming around free as a bird because of that Sanctuary policy was never exposed to the jury during the trial. 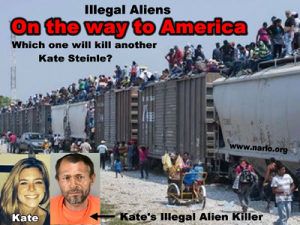 The jury was composed of six men and six women.  Three of those jurors were immigrants.  It is not known whether the immigrants were legal or illegal but that contingent of immigrants may very well have played a role in a “not guilty” verdict.  The killer pulled the trigger but the sanctuary city mindset was tattooed on the bullet.

The trial was a sham and an egregious miscarriage of justice.  As it stands right now, no one has atoned for Kate Steinle’s death.

Fortunately, a federal arrest warrant has been issued for the killer on other federal charges, so it is likely he will do a few more years in prison ….. before they deport him.  But if the FEDS deport him, he will just come back across the border and head straight for a sanctuary city, like San Francisco.

A porous southern border, lax illegal immigration enforcement and Sanctuary City policies killed Kate Steinle.  The hue and cry against this injustice should be heard loud and long across the land.  If people are as angry as we are, there are two specific actions they can take so that Kate Steinle’s death will not be in vain.

NOTE:  We have prepared a sample letter to the Mayor of San Francisco and the San Francisco Board of Supervisors, telling them Americans and businesses are going to boycott their city because of the city’s Sanctuary City Policy.  To see the sample letter and San Francisco and Governor Jerry Brown’s contact information, including telephone and fax numbers and individual e-mail addresses, click HERE.  Overload their phones and e-mail addresses with your anger and disgust.  Phone ’em.  Fax ’em.  E-mail ’em, or call ’em.  If the federal government can’t control sanctuary cities, maybe the people can.  The city of San Francisco needs to pay for the death of Kate Steinle!

Who said Americans won’t do the jobs performed by illegal aliens?  Many of those in our age group (60’s, 70’s and 80’s) cut their teeth on picking berries, apples, pears and peaches in their teenage years.  Some of us picked cotton.  Our first job was picking Logan berries at the age of 12.  We were excited about earning a little extra money so that we didn’t have to beg our parents for an allowance.

Good Lord, when are Americans going to get mad enough to do something to right the injustices that happen to us every day.  Illegal immigration is a festering sore on our bodies, our emotions, our laws, our financial wellbeing and our economy.  If this sore goes untreated, it will kill us and it will eventually kill American freedom and sovereignty, if it hasn’t already.

Here are some other actions Americans could take, or lobby government to change the laws.

1)         Close and protect our borders from infiltration by illegal aliens, drugs and terrorists, by whatever means, including physical force.  If there were severe penalties for crossing our borders, there would be less of it.

4)         Track all foreigners who over stay their visas and deport them.

6)         Severely punish employers who hire illegal aliens and make them responsible for proving citizenship of their employees.  As an employer we took validating citizenship very seriously.  If there was any question, we investigated.  Fine the employer $10,000 for every alien they illegally employ.

7)         As some states are doing now, stop all social benefits, education, bilingual services, emergency services and social services to any individual or family that is not a legal citizen of the United States unless here on a valid visa or green card.

8)         Loosen the child labor law regulations so that teenagers can learn about work, salaries and responsibilities by working on the farms and picking America’s crops.

9)         Pass Kate’s Law giving mandatory 5 year sentences to illegal aliens that come back across the border after being deported.

In a previous article on illegal immigration we wrote:

As reported by the Texas Department of Public Safety:  “According to DHS status indicators, over 217,000 criminal aliens have been booked into local Texas jails between June 1, 2011 and March 31, 2017. During their criminal careers, these criminal aliens were charged with more than 579,000 criminal offenses. Those arrests include 1,179 homicide charges; 68,900 assault charges; 16,854 burglary charges; 68,999 drug charges; 699 kidnapping charges; 40,818 theft charges; 45,104 obstructing police charges; 3,813 robbery charges; 6,190 sexual assault charges; and 8,693 weapons charges. Of the total criminal aliens arrested in that timeframe, over 144,000 or 66% were identified by DHS status as being in the US illegally at the time of their last arrest.”

In each one of these crimes in Texas there is a Texas victim or victims that you never hear about, whose lives have been altered forever by the criminal actions of an illegal alien.  There may even be a Kate Steinle in there somewhere.  Many of the convicted criminal illegal aliens are now in our jails and the American taxpayer gets to pay for their incarceration as well.  And this is just one state.  Are you beginning to get the picture?  Are you angry yet?  If not, why not!

Ladies and gentlemen, Americans cannot and should not look the other way when a national injustice is staring them in the face.   How bad does it have to get before people of courage and conviction rise up and right that injustice?  Sadly, most of the suggestions we have made in this article will never be implemented because the Congress is impotent and the people are lazy or plain don’t care.

However, our readers and other Americans have a chance to make a difference today.  Check out our “Boycott San Francisco” web page.  Copy and paste our sample letter into your word processor and mail it, or e-mail it to the San Francisco Mayor and the Board of Supervisors.  Or call or fax them.  We have also provided their phone and fax numbers on the web page.  If you don’t like our wording, change it.  We’ve done the hard work and made it easy for you.  Make San Francisco pay for Kate Steinle’s death by letting them know you are going to boycott them.  The killer didn’t pay, but justice demands that someone must pay.  Make that someone the City of San Francisco.

If this doesn’t go viral, it will be a token effort.  Token efforts always fail.