Skip to content
Home/National Headlines, November 2017/Immigration reform: Trump Faces Challenges Not From Nation’s Enemies But From The Deep State

Immigration reform: Trump Faces Challenges Not From Nation’s Enemies But From The Deep State

At the start of President Donald Trump’s administration, he immediately called on Congress to look into taking the steps necessary to secure the borders, perform better background checks of refugees from nations known to harbor radical Islamic terrorists, and to finally start controlling the huge amount of illegal immigration that plagues the nation.

After eight years of allowing the minimally successful immigration/border security program to collapse — and hearing political leaders including President Barack Obama and former Speaker of the House Nancy Pelosi resort to name calling and denigration of law enforcement officers — it comes as no surprise that the vast majority of Democrats and the Trump-haters in the GOP would make reform as difficult as possible. 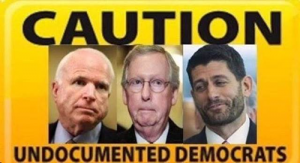 CBP officers inspect all U.S.-bound travelers on pre-cleared flights at the 15 Pre-clearance locations and, if deemed inadmissible, a traveler will not be permitted to board the aircraft. CBP also operates nine Immigration Advisory Program and two Joint Security Program locations, as well as three Regional Carrier Liaison Groups, through which CBP may recommend that air carriers not permit identified high-risk travelers to board U.S.-bound flights.

CBP data showed that it identified and interdicted over 22,000 high-risk air travelers through these programs in fiscal year 2015 (the most recent data available at the time of GAO’s report).

However, CBP had not fully evaluated the overall effectiveness of these programs using performance measures and baselines. CBP tracked some data, such as the number of travelers deemed inadmissible, but had not set baselines to determine if pre-departure programs are achieving goals, consistent with best practices for performance measurement.

Visa Overstays Overlooked by Past Administrations

Visa overstays are an often overlooked national security issue. Four of the 9/11 hijackers had overstayed their visa, or were out of status at the time of attack and several other high-profile terror attacks and plots have come from overstays.

In fact, the 9/11 Commission recommend that Congress quickly establish an exit tracking system to close this security vulnerability. The purpose of the GAO’s ongoing probe is to examine the current state of DHS’s efforts to quickly identify and remove national security and public safety threats who have overstayed their visa, and the progress CBP is making on establishing a biometric exit system.

The Committee has established a new bipartisan Task Force on Denying Terrorists Entry to the United States. The main, though not exclusive, thrust of the task force will be a review of the Government’s implementation of the Visa Waiver Program Improvement and Terrorist Travel Prevention Act to identify the progress made, the gaps that remain, and potential new gaps that have emerged within the Visa Waiver Program as we approach the one-year anniversary of the Trump White House.

In May 2016, during the Trump v. Clinton race for the presidency, the GAO reported on DHS’s oversight of the Visa Waiver Program (VWP), which allows nationals from 38 countries to travel visa-free to the United States for business or pleasure for 90 days or less.

GAO reported, among other things, that all 38 countries entered into required agreements, or their equivalents, to (1) report lost and stolen passports, (2) share identity information about known or suspected terrorists, and (3) share criminal history information. However, not all countries shared such information.