Home/November 2017, Opinions/Inertia Is Why We Can’t Stop America’s Socialist Train

Inertia Is Why We Can’t Stop America’s Socialist Train

Anything that is moving has inertia in accordance with Newton’s first law of motion.  That applies to avalanches, trains, ships, cars, animals, humans, cultures, societies, nations, falling trees and even the Earth orbiting the Sun.  There is no known human power strong enough to stop an avalanche.  To stop a speeding train takes an immense amount of braking energy.  It takes over a mile to stop a fully loaded super tanker with the engines in full reverse.

Humans, cultures, societies and nations are also affected by inertia.  Once they start moving in a certain direction for an extended period of time, their inertia keeps them moving in that direction and it takes a powerful force to stop the direction or change its path.  America has been guided in a certain direction for over 100 years, heavily influenced by a human-created ideology that is the antithesis of the foundation of the nation’s creators.  To have any effect in changing the direction of the American culture will take a dismantling of this human-created ideology.  Since it took at least four generations of inertia to hold America in the direction she is going, it could easily take as many generations to turn her back to the original path, if there was sufficient energy to change that direction. 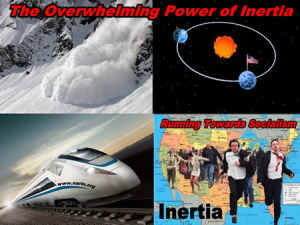 How did we get here?  We changed our original direction based on individual liberty, towards a collective society, heavily influenced by a human-created ideology solely based on seeking political power by exploiting the weaknesses of mankind and offering “free” gifts (money) in exchange for votes.  This flawed ideology has infected all of our institutions and the culture itself and has sent our sovereign nation careening towards a very high, vertical cliff with the final result being national, culture and sovereign annihilation.  The people of America know no other way because they have no memory of the way it was, purposely removed from memory by this human-created flawed ideology that tells them that dependency on government is their only secure and safe reality.

What are the manifestations of this human-created ideology that has kept us fixed on a path to destruction?

Besides liberal politicians and bureaucrats, there are just too many other Americans giving “inertia” to America’s socialist train.  This is the “inertia” that has set America on the path to national, cultural, economic, financial and sovereign suicide.  This flawed ideolgoy is so embedded in our institutions and in the hearts and minds of millions of Americans it may be impossible to stop or change its direction, or save the “train” from derailing at the next sharp curve.

In fact to change the direction of America in less time than a generation or two, it could take a powerful, charismatic leader, millions of people willing to join him or her, and a well-funded organization (in the hundreds of millions of dollars).  It would take a veritable “mind shift” in the general population, away from the current human-created flawed ideology, to have any affect.  That means the curriculum in our public schools and colleges will have to change back to the foundations of individual liberty.

The discourse between individuals will have to be less argumentative and more aligned with reason, intellect and logic, in keeping with the principles of freedom.  Those conversations and discourse must be less punctuated by bigotry, racial tensions, mindless fixations and raw emotion. To increase the speed of change in direction, a massive and continuous national TV, radio, magazine and newspaper saturation advertising campaign would be needed.   With enough money, we could change America’s direction in one election cycle.

But most of all, it would take a return to personal honor, honor in our politicians and honor in the general population.  Without honor, societies, cultures and free nations collapse.  This human-created ideology we have described herein is devoid of honor and has set the “inertia” for America for most of the 20th Century and the early part of the 21st Century, up to the present day.  There are signs (the Trump win) that this flawed ideology is showing cracks in its armor, as more and more of its policies fail and more and more of its followers become disillusioned.  It remains to be seen whether there is enough energy in the rest of the population who cherish freedom, to dismantle the deep state and entrenched establishment in order to change the flawed path upon which America now travels.  Because it is America’s current “inertia”, sustained by this flawed ideology, that will make it very difficult ….. to slow down, stop, or change the direction of America’s socialist train.

Which TRAIN are you on?