Home/November 2020, Opinions/Into The Abyss Of Hell With A Biden Presidency

Into The Abyss Of Hell With A Biden Presidency

As we wrote this, the likelihood that Joe Biden will become president of the United States is pretty much a foregone conclusion.  The obstacles against Trump appear to be insurmountable, even with court cases and re-counts.  The evidence of voter fraud may be the worst we have seen in the history of the Republic but does it amount to enough votes to declare Trump the winner?  It isn’t likely.  The forces and the billions of dollars working to elect Joe Biden and defeat Donald Trump were and are formidable and international in scope.  Trump was up against overwhelming obstacles that even he couldn’t see.

All that aside, Joe Biden will set about once again to “fundamentally transform” America into his distorted and unconstitutional image of what the Socialist Republic of America should be.   The only saving grace will be the Republicans holding onto the Senate. 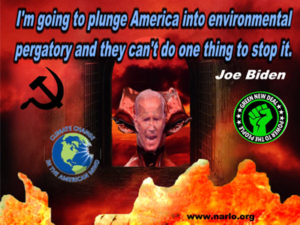 Even though Wall Street gurus are saying that divided government is a good thing for the markets and the economy, that position overlooks the damage that Biden can do with Executive Orders and appointments to the various cabinet secretaries.

Trump decreased both taxes and regulations and the result was a booming economy.  In order to implement the Agenda 21, Green New Deal and Climate Change policies without having to go through Congress, Biden will reverse that trend and there will be an explosion of higher taxes and bureaucratic rules that will dramatically change the face of America, from rural communities to big cities.   Biden will appoint Progressive radicals to an alphabet soup of federal agencies.  From the EPA, to HUD, to HHS, to DOE, to DOJ, to FBI, to USDA, to NSA, to CIA, to DOD, etc. the directors of these agencies will be drawn from a register of socialists and environmentalists, many from the over-educated, liberal academic community, or from Obama’s czars.

Three areas in which regulations will grow the most will be from the Environmental Protection Agency (EPA), Health and Human Services and the Department of Energy (DOE).    Any Biden appointee to the EPA will come with an overriding environmental bias and the regulations emanating from that bias will be draconian.  Rural landowners will be a singular target of the new EPA rules.  After all, the Green New Deal calls for the phasing out of fossil fuels and cattle.  Just try running a farm without fossil fuels.  Under a Biden presidency, landowners will need our powerful, legally intimidating No Trespassing signs even more than they do now.  (See: HERE and HERE)

Health and Human Services will expand its socialist role with new housing rules to implement so-called “fair housing” and “anti-discrimination” policies.  The suburbs will be hit by these new rules the worst.  Densities will increase, more high-occupancy affordable housing will be added, single-family homes will be zoned out of existence and racial quotas will be strictly enforced.  Pretty soon the suburbs will look just like the cores of crime-ridden inner cities. White flight will be replaced by a multi-cultural kaleidoscope of different colors and races, forced upon the people by government in the name of racial equality.  Eventually, those that can will flee the suburbs.

Biden’s Department of Energy (DOE) will immediately set out to phase out fossil fuels, limit or eliminate fracking and work to transform America’s energy demands to wind and solar energy, no matter the millions of lost jobs or the cost to the American taxpayer to subsidized the effort.  Neither nuclear energy, nor hydroelectric power will be in those efforts.  In fact, initiatives to demolish dams will be ongoing, to placate environmentalists and Indian tribes.

On immigration, Biden will move quickly to undo Trump’s positive initiatives to control illegal immigration at our borders.  He intends to re-instate catch and release, putting hundreds of thousands of illegal aliens into our society with no means of support other than jobs they will take away from legal Americans and social benefits paid for by the American taxpayer.  He has threatened to tear down the Trump border wall and end the emergency declaration that allowed Trump to take funds from the military budget to build the wall.  Biden will stop all deportations from the day he takes office.  On Biden’s website he states that he will “Marshal federal resources, through the establishment of the Task Force for New Americans (illegal aliens) to support community efforts to welcome immigrants.”  Biden also intends to create a system that will grant legal status and a path to citizenship (amnesty) to all illegal aliens now living in America and those that will invade our country in the future.  All of these efforts by Biden will cause another flood of illegal aliens to cross our borders and get on the American-funded gravy train.  Many of those illegal aliens will transport drugs, human trafficking, terror, embedded ignorance and disease to American shores. But they will also bring a huge voting block to the Democrat Party.

Biden will be chomping at the bit to re-join the “Paris Climate Agreement” and suck trillions of dollars out of American taxpayers to pay for a climate fraud (see: “Climate”) and to re-distribute America’s wealth to third world countries.

The next thing Biden will do is to re-start negotiations with Iran to re-instate the failed Obama Administration’s Iran Nuclear Deal, (JCPOA).  Trump withdrew from the deal because Iran wasn’t living up to its agreement and it was still sponsoring terror throughout Europe, Africa and the Middle East using the $150 Billion ($400 Million of it in cash) Obama handed over to Iran’s Ayatollahs as part of the JCPOA.  Biden can do this unilaterally while thumbing his nose at Congress and the American people.

Trump brokered historic breakthroughs in Middle East peace with normalized relations established between Bahrain, United Arab Emirates, Sudan and Israel.  More normalizations would have followed if Trump won a second term.  Will Biden continue this important peace initiative in the Arab world, or will he screw it up by cutting deals with Iran?  Will he inflame the already tense situation between Israel and the Palestinians?  Israel can’t be too happy with a Biden presidency.

Biden will attempt to nationalize the American health care system in what Democrats call Medicare-For-All.  He may also try to repeal the Electoral College, repeal the Senate filibuster rule and add Washington DC and Puerto Rico as the 51st and 52nd states with the sole goal of packing the U. S. Senate such that it becomes an unbeatable, single party, Democratic Chamber of Congress.    Fortunately, as long as the Senate remains in Republican control, none of these initiatives can be passed.

It is quite likely that Biden will remove the tariffs on foreign countries, including China.  Since he is obviously compromised by his private dealings with powerful Chinese companies, directly connected to the Chinese Communist Party, his demeanor towards China will be subdued and conciliatory, bordering on appeasement.  China will be free to engage in its military and economic expansion, free of any U. S. restraints, along with sucking more jobs away from American workers.

Biden’s relationships with our foreign friends will be to back peddle Trump’s hard stance.  NATO countries will be able to relax their military and self-defense contributions to NATO and re-nig on their commitments to the EU.  European countries will be free to cozy up to Russia for their much-needed energy requirements, leaving them vulnerable to Russian demands and weakening the military influence of NATO.

Biden will be backed up in his presidency by the news media, academia, public school educators, the United Nations, the European Union, Wall Street, multi-national corporations, unions, social media, the political establishment and the deep state, a force so formidable it will become insurmountable.   All of these entities were aligned against Trump.  He didn’t stand a chance.

Conservative voices will become irrelevant, or heavily censored.  Within a decade, we predict that one-party rule will have enveloped America in the name of Progressivism and socialism.  Big cities will rule America.  (See: “Big Cities”) Conservative thought, ideas and ideology, along with individual freedom, unalienable rights and the U. S. Constitution will become a short entry in a dusty old history book under the heading of “Failed Republics”.  Most of the thirteen colonies that gave birth to freedom, have long since succumbed to socialism.

America’s Constitutional Republic will become officially dead, to be replaced by a government model that can only end in civil war or revolution, as all other socialist countries have ended.  But the one thing that the socialists will want is the conservative’s money in the form of usurious taxes in order to pay for all of their socialist and environmental mandates.  Comply or else!

It only took a little over a Century to kill the last great hope for planet earth.  The people of earth will pay a steep price to regain their freedom ….. if ever!  We could have stopped it peacefully.  Now there appears to be no other alternative than all out war.

A marine, fresh from the war in the Middle East, summed it up this way:

“To everyone instigating a possible civil war from all sides, let me give you a little bit of advice.  Many of us served and fought in the wars.  When our time was done, we came back to the USA to start over and live in peace.  It wasn’t us that kneeled on the neck of a man until he died.  It wasn’t us to retaliate by kneeling on the neck of a toddler saying BLM now.”

“You see, war is Hell.  Millions of you do not quite grasp this concept.  We have been to Hell, lived in Hell, climbed out of Hell, and don’t want to go back to Hell.  If you keep trampling on the peace we fought for, earned and loved, then when the first shotz get fired, you will force us back to Hell; and we will show you the brutal realities of Hell.  Y’all better work this “sh…t” out before we do, because I guarantee that none of you are ready for this.”

Joe Biden, if elected, is going to take America into the depths of Hell and if anyone wants to get out of that Hell, they either better peacefully change the radical, insane mindset that has taken over ignorant Democrat Americans, or be prepared to enter the Hell this marine is talking about.  If you don’t confront the bully, the bully owns you and right now every American is an owned slave of the socialist, Progressive establishment bully.

It defies credibility that 75,000,000 supposedly-intelligent Americans voted for this hopelessly corrupt, over-the-hill, empty shell of a man, do-nothing politician whose only claim to fame is getting he and his family filthy rich off of an influence peddling scheme with world oligarchs and criminals.  There is just no accounting for people’s stupidity, ignorance and naiveté.  Blind, deaf and dumb come to mind.  If these socialist Democrats control America’s destiny, move over Venezuela.  (See:  “What Is In The Muddled Mind of the Democrat Voter?”

Today is Veteran’s Day 2020 where we honor and pay tribute to our American warriors.  A Biden socialist presidency spits on and trashes the memory of those gallant warriors that swore on oath to preserve, protect and defend the Constitution of the United States.  What Constitution?