Iranians Leaving Islam By The Thousands

The rule of the Islamic Republic of Iran (IRI) is collapsing. The previously solid castle shows many cracks that continue to grow. In the past, when individuals were willing to sacrifice their life under any circumstances for the sake of Islam and any criticism of Islam, even in their own mind, considered sin, today it is easy to criticize and challenge religion. A nation that, at the forty years ago, preferred to speak of Ayatollah Khomeini, saint like and almost godly, now he is openly reviled without any fear of retribution. 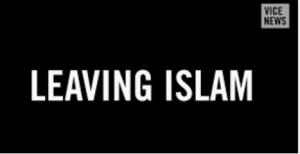 What is the first Muslim country in the world that has the smallest number of true Muslims, you might ask? Such a country is none other than Iran. And this is seen in the virtual world of Facebook or Twitter and other Iranian websites that criticize and reject Islam. This is not possible in other Muslim countries such as Turkey, Iraq, Pakistan, Afghanistan and Arab countries where you cannot joke about Islam without dire consequences, except when it comes to the Iranian nation.

Examples of this is the Imam Naghi Campaign. Of course, there are still people who are trying to convince the nation that this is not true Islam, and Islam is a righteous and a true belief.

There are hundreds of thousands of Christians in Iran. Those considered part of native Christian communities are permitted to practice their religion with limitations, but a Muslim converting to Christianity is considered an apostate. The Iranian government jails converts, especially those who proselytize. The authorities see it as a Western plan to turn Iranians against Islam and the Islamic regime, according to converts in Turkey. 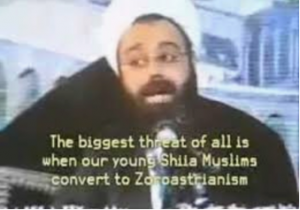 The antigovernment rallies that erupted in Iran in the last days of 2017 exposed that millions of Iranians are now disillusioned with the Islamic Republic. Furthermore, there are signs that quite a few Iranians are now also disenchanted with Islam itself. Often silently and covertly, they are abandoning their faith. Some opt for other faiths, often Christianity.

Before the Islamic invasion (Revolution) of 1979, most Iranians were uninformed as to the core values of Islamic ideology simply because they could not read Arabic. So, they created their own version in their minds. Regrettably, in the seventh century AD, the Persian Empire (Sasanian Dynasty) lost the war to the Bedouins of the Arabian Peninsula in the Battle of Qadisiyyah. Why they were defeated is a long story. For years Iranians resisted and fought back, but to no avail. With that defeat, the Islamic creed was imposed on an enlightened, tolerant and free people at the point of a sword.

Zoroastrianism, the original Iranian religion, was not an effective barrier against the radical and backward religion from the Arabian desert. 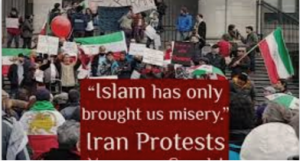 Forty years has passed since the Islamic invasion of 1979. Today, many Iranians are incorrigibly disaffected from the fraudulent and oppressive Islamic rulers. Although Islam was imposed on the Iranian people some 1,400 years ago, Iranians deeply value their own ancient non-Arab identity and have never fully surrendered to Arab culture.

Today, Iranians have finally awakened and search for their roots and identity. Some people have thanked Ayatollah Khomeini for this enlightenment. For revealing the true Islam, not the figment of their imaginations about Islam. Many have already started to refer to this period as an era of Persian renaissance or awakening.

Historically, Islam has always contradicted Persian values, costumes, traditions and culture, as is evident from the glorious pre-Islamic Iranian festivities and celebrations such as Nowruz. The current anti-Islam movement in Iran has recently gained serious momentum, especially among the younger generation who are savvy and aware of world events via the Internet.

Many Iranians continue to abandon slaveholder Islam: they break loose from the yoke of an exploitive clergy, renounce Islamic dogma, purge the discriminatory and bizarre teachings in the Quran and the Hadith, and leave the suffocating tent of dogmatic Islam for the life-giving expanse of liberty.