Four decades ago, former President Jimmy Carter interfered in Iran’s affairs by sending a message to Iran’s generals via his ambassador, William Sullivan and General Huyser to make sure that Iran’s military remained neutral during the revolution. Sullivan oversaw secret talks with opposition leaders even as he pressed the Shah to restrain his security forces. He was in favor of the Shah’s departure from Iran and Khomeini’s return from exile.

That decision from the US administration and the Shah’s terminal illness accelerated the mullahs’ determination of ending the rule of monarchy in Iran.

Meanwhile, new documents about General Huyser’s secret mission to Iran reveal US plans after the Shah’s departure. I left Iran in 1978, at the beginning of the Islamic invasion. But I witnessed with my own eyes what was happening. Iran was falling into the hands of Islamic thugs with full blessing of Jimmy Carter. The question that still rings in many Iranians’ ears is why? 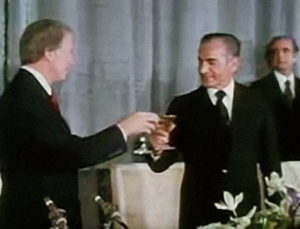 The Shah of Iran was America’s greatest ally and was instrumental in maintaining peace in the Middle East. Why would America want him gone? After the arrival of Khomeini, a radical Shi’a cleric, almost overnight Iran was transformed from a modern and progressive country, to a 7th century Islamic backward state. By the time the Shah left for exile in January 1979 he had curtailed his own position to a constitutional figurehead, and made no effort to save his throne through force.

The Shah of Iran I knew was kind and loved his country and worked very hard to transform Iran from a backward nation into a modern country. The Shah left Iran because he was against bloodshed. Unlike President Bashar al-Assad of Syria, the Shah voluntarily relinquished power rather than unleash the army and start a civil war. That was his style.

It is worth mentioning that the leftist media in the west falsely accused the Shah of human rights abuses while they never mentioned Khomeini’s mass killings in the name of Islam. Jimmy Carter’s allegation against the Shah for holding many political prisoners was a false allegation. At the minimum, there were not more than a few hundred political prisoners who were a threat to Iran.

“The problem was not only the realization that Pahlavi state might have been telling the truth but the fact the Islamic Republic had justified many of its excesses on the popular sacrifices made,” observed historian Ali Ansari. 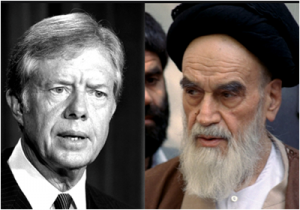 During Khomeini’s decade in power, from 1979 to 1989, an estimated 12,000 monarchists, liberals, leftists, homosexuals, and women were executed and thousands more tortured. The Khomeini 1988 fatwa killed up to 30,000 in Iran.

The Islamic revolution happened because the Shah trusted his immediate cabinet members and generals to tell him the truth. But they did not. They left him in the dark about the situation inside Iran.

U.S. ambassador Sullivan compared Khomeini to Gandhi, the pacifist leader of India knowing full well Khomeini was no Gandhi. Only a democrat can be that foolish.

For the past forty years, President after President was elected to office, promising to stand with the Iranian people in their struggle to achieve freedom and democracy and instead, they gave legitimacy to the illegitimate Islamic government by secretly working with the mullahs.

The US and Islamic regime have been adversaries for roughly four decades, and that contentious relationship has at times sparked acts of extreme aggression — including the assassination of Iran’s top general, Qassem Soleimani, on last Friday.

The killing of the Islamic Republic top general opened a new chapter of a cold war between the mullahs’ regime and the United States. This assassination was immediately praised by the Iranian people who had lost sons and daughters in the recent uprising. To them, the killing of Soleimani was a relief for murder of their children. Although the main adversaries are the U.S. and Iran, much of the world has a huge stake regarding this potentially catastrophic confrontation. Israel, the Persian Gulf states, Saudi Arabia, Egypt, Iraq as well as nations farther away from the region are willing and unwilling parties to this unfolding crisis.

It is obvious that the current situation is dire indeed. Anyone who believes that sane rational people on both sides are engaged in brinksmanship to secure the best advantage would eventually work out a compromise, is deluding themselves. President Trump did something which his previous predecessors were incapable of.

The EU, Russia and PRC must stop appeasing this terrorist regime. If you don’t believe me, wait until they get their bloody hands on their long-cherished ultimate weapon. To state an overused cliché: keep kicking the can down the road, like both George Bush and Obama did, and let someone else worry about it.

Well, that someone else now is President Trump. Is he going to follow suit or is he going to do the painful thing that his predecessors had eschewed? A tough call. A truly tough call. A call that must be answered now or at a much tougher time ahead.

In some cases, time works as a healer and even as a solution to thorny problems. Yet, this problem will not go away, and time would only make the cataclysmic clash more likely and deadly. There is, however, a non-violent solution, without appeasement that offers the best chance to resolve the impasse.

The United States has a moral duty and obligation to rectify its 1979 mistake by helping the Iranians to achieve their goal of Regime Change.