In the midst of his ongoing proxy-war against Israel — using Hezbollah terrorists to launch rockets onto Israeli soil — Iran’s Supreme Leader Ayatollah Khamenei weighed in on the current Second Amendment debate in the United States.

While Israeli citizens endure Iran’s latest terrorism attacks, Khamenei echoed the American “Deep State’s” call for disarming U.S. gun owners under the guise of protecting children from the kind of mass-killings that were seen in Florida and other schools throughout the U.S.

“The leader of a renegade nation openly hostile to America’s freedoms has found a certain degree of simpatico thanks to the relationship crafted by President Barack Obama, Secretary of State John Kerry, and members of Obama’s national security team. Obama and Kerry both entered into a nuclear arms agreement with the Ayatollah Khamenei that was hailed by many politicians and the Democrat’s cheerleading news media consortium as being a triumph for peace,” said former police officer and attorney Mike Baker.

“Obama always seemed to prefer comradeship with Iran over protecting and serving the needs of the American people. It doesn’t matter to him and other enlightened politicians if Iran continues to construct a nuclear weapon and a missile delivery system that could kill millions of Americans a/k/a the deplorables. In Iran, Obama found a leader he could admire and possibly emulate,” Baker stated in an interview with Conservative Base’s editor, Jim Kouri.

Khamenei who is at once a religious Muslim and a feared dictator often brags about having total control of his own people, suggested that American leaders immediately disarm American citizens thereby laying the foundation for a strong centralized and omnipotent government. Besides, more and more Americans are becoming aware that the U.S. Deep State indeed exists and that more and more politicians view the U.S. Constitution as hindrance to achieving the Utopian society envisioned by the likes of Obama, Hillary Clinton and other globalists.

Khamenei’s idea about the Second Amendment is a model that many U.S. leaders would “officially” oppose, while they secretly plot to duplicate.  As with past dictators, the Ayatollah’s first pursuit when he came to power was to disarm Iranian civilians, a ploy utilized time and time again.

In addition, many American elitists — politically-active captains of industry, the overpaid but under-educated denizens of newsrooms, the self-congratulating hypocrites in the entertainment industry, and other fellow-travelers –have been silent about their pleasure of being on the same page as Ayatollah Khamenei’s regarding gun control, Christianity, Judaism and other issues appearing on their hidden agenda.

With all of the attention of the Trump-impeachment-obsessed Democrats — and the majority of their news media minions — was focused on the hearing of fired FBI director James Comey, most Americans were ignorant of Obama’s actions that always seemed to benefit the Ayatollah.

These President Donald Trump-hating leftists were disappointed when Comey testimony showed that: 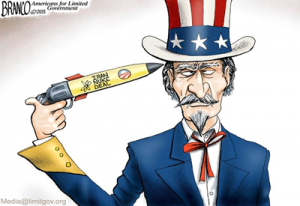 Trump is not now, nor has he ever been, under investigation by the FBI; President Obama’s attorney general, Loretta Lynch, told Comey not to call the probe into Hillary Clinton’s endless scandals an “investigation,” but rather a “matter”; and that Comey himself leaked his own memo about meetings with Trump, giving them to a leftist university professor to secretly turn over to a news media denizen.

During the Comey testimony, there was another hearing that uncovered much more explosive and disturbing information: President Barack Obama and his administration disbanded national security units which were originally charged with investigating Iran’s network of Islamic terrorism funding.

Obama, Valerie Jarrett (born in Iran), Susan Rice and other members of the former President’s inner-circle “systematically disbanded” special law enforcement units throughout the federal government that were investigating the Iranian, Syrian, and Venezuelan terrorism financing networks. Obama and his Secretary of State John Kerry were concerned the counter-terrorism units would lead to Iranian officials walking away from Obama’s precious nuclear deal with Iran, according to a former U.S. official with expertise in dismantling criminal financial networks.