Is America Worse Than Sodom And Gomorrah?

It seems that the fate of feminism, when applied in the real world, is not without a sense of irony, karma, and poetic justice. Feminist women have always proclaimed that women can do anything a man can do. Now, as transgenders who were biologically born men have been permitted by the cultural elites to enter into women’s sports competitions, women are realizing that they cannot compete on the same playing field with biological men posing as women, and some women have begun to rightly complain and object.

ISAIAH 3:12 (NKJV):
As for My people, children are their oppressors, and women rule over them.
O My people! Those who lead you cause you to err, and destroy the way of
your paths.”

In 1920, women were granted the right to vote in American elections, and in less than 100-years, the damage done to the culture has been catastrophic. Historically, a man would marry a woman to have a life partner, someone to lawfully have sex with, have children with, live a happy family life with, till death. Hostile feminist mentalities towards men, encouraged by Western societal indoctrinated culture, coupled with easy no-fault divorce laws, means there is no guarantee of any stable family life. The risk-reward reality of marriage for men, in many cases, means high risk and very low reward potential. Traditional marriage in America is on the decline, because every other abominable sexual lifestyle is being promoted at the expense of marriage between a man and woman.

A decline in traditional marriage has resulted in a decline of childbirth rates in America. That, coupled with the ‘right’ to abort children as a matter of convenience and birth control, up and until after the moment of birth, has led to a steep decline in birth rates in the United States. But don’t worry, say the Democrat politicians. We will prevent President Trump from building a American-Mexican border wall, we will welcome in dangerous illegal immigrants, and we will ensure American women’s abortions as a guaranteed ‘healthcare’ right! America’s abortion mills will keep butchering the newborns and America’s borders will remain wide open. The Democrat Party will continue to fight for the right of illegal immigrants to pass through America’s border walls, as they ensure the right of American women to kill their children as they pass through their vaginal walls.

PROVERBS 31:10 (NKJV):
Who can find a virtuous wife? For her worth is far above rubies.

Many women simply don’t know how to be good wives today, which is why traditional marriage is on the decline. Men likewise, don’t know how to be good husbands and have been discouraged from being men by America’s hostile-towards-men feminized society. Men have been systematically demasculinized by the feminized culture through Hollywood, and by such methods as applying anti-bullying laws and phony medical diagnosis’ for ADHD to boys, which are meant to thwart strong male masculine attributes. With women’s unwarranted anger towards men in general on the rise, fully supported by a society that appeases women’s false rape and domestic violence allegations towards men, and typically adversely rewards women in the divorce courts, more and more men are embracing the MGTOW movement = Men Going Their Own Way.

Where have all the good men gone? 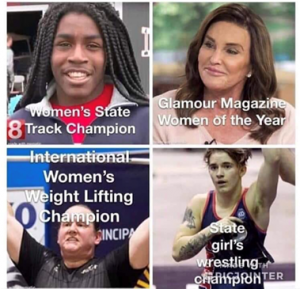 When something is discouraged, demoted, and punished, you get less of it; when something is encouraged, promoted, and rewarded, you get more of it. Traditional marriage has been discouraged, demoted, and punished, and we are seeing less marriages today; LGBTQ lifestyles are encouraged, promoted, and rewarded, and we are seeing more sexual depravity than ever before in America. In the wake of the loss of traditional marriage, LGBTQ lifestyles sometimes take the place of traditional marriage for some persons. This, of course, is the goal of the LGBTQ movement. LGBTQ persons know that they cannot reproduce, so they must recruit.

We are told by liberals that there is ‘white male privilege’ that exists in American society today, and this is a problem that must be addressed. That, of course, is liberal (I refuse to use their inaccurate, self-descriptive term: progressive) propaganda meant to further demasculinize, demonize, and ridicule white men. White men (especially conservative white men) are the single most discriminated-against group of people in America. White men must score higher on civil service tests than non-white men, due to outdated, unnecessary, and unfair affirmative action laws, and higher-qualified white males are often discriminated against and bypassed for employment opportunities in order to meet government mandated quota hiring standards for minorities and women.

Many say that America is culturally divided and all this is all leading to a civil war. Unlike the American Civil War of 1861-1865, in America’s Culture War, the battle lines are not as clearly drawn. Liberal ideology crosses state lines and state sovereignty allegiance is nowhere near as ingrained in the general public’s mindset as it had been over a century ago.

Is America worse than Sodom? Yes and no. America’s national sins are worse than Sodom’s, but there are more righteous persons living in America than there were in Sodom.

GENESIS 19:4-5 (NKJV):
Now before they lay down, the MEN of the city, the MEN of Sodom, both old
and young, all the people from every quarter, surrounded the house. And they
called to Lot and said to him, “Where are the MEN who came to you tonight?
Bring them out to us that we may know them carnally.”

Homosexuality was rampant in Sodom, so much so that there were groups of homosexual gang-rapist men who surrounded righteous Lot’s house, demanding to rape his male houseguests. But men were men in Sodom. There was no gender confusion or counterfeit alterations of gender in Sodom, as the Scriptures record.

ISAIAH 3:9 (NKJV):
The look on their countenance witnesses against them, and they declare their sin as Sodom; they do not hide it. Woe to their soul! For they have brought evil upon themselves.

America’s celebrated national sins not only include homosexuality and gay marriage, but the cultural elites of America demand that its citizens take pride in celebrating all things perverted under the LGBTQ banner, which includes gender fluidity and gender ‘change.’

JEREMIAH 13:23 (NKJV):
Can the Ethiopian change his skin or the leopard his spots? Then may you also do good who are accustomed to do evil.

What was once widely known as a universal truth the cultural elites are trying to change, through liberal propaganda, in the hearts and minds of American citizens. It is IMPOSSIBLE for a human being to change his or her gender. No human being has ever been both the biological father and mother of a child. Furthermore, no one is or ever was born gay. Bruce Jenner fathered six children as a man, so he knows perfectly well how to get aroused by a woman, get an erection, engage in sexual intercourse with a woman, deposit sperm in her, and father a child with her. Bruce Jenner, suffering from gender dysphoria mental illness, was enabled, encouraged, and rewarded by American culture when he chose to become a counterfeit woman, a living, walking, talking breathing abomination of a woman. Even had Bruce Jenner undergone his transformation in his 20’s, he would have NEVER given birth to a child as a mother. Bruce Jenner is a sexually mutilated man, yet the culture elites praise Jenner as brave and courageous, and go along with the make believe fairy tale transformation, calling him “Kaitlyn.”

The LGBTQ people, people who are accustomed to doing evil, are so lost and blind in sexual depravity that it is virtually impossible for them to do good. What is more disturbing than the LGBTQ people themselves, is the cultural elites in society, many of whom are heterosexuals, who support this evil. Why they do this is anyone’s guess. A hatred for traditional Christian values in America? A desire to bring down all sexual morality barriers in America? A hope to divide and conquer a traditional family decimated America? Probably all of the above.

God will not be mocked forever, nor will He allow gender mutilation and infanticide through abortion to continue indefinitely on American soil. As it has been said, “If God doesn’t judge America, He owes an apology to Sodom.”

ISAIAH 13:19 (NKJV) [WITH INTERPRETATION]:
And Babylon [AMERICA], the glory of kingdoms [LEADER OF THE FREE WORLD], … will be as when God overthrew Sodom and Gomorrah.

REVELATION 18:10 (NKJV) [WITH INTERPRETATION]:
‘Alas, alas, that great city Babylon [AMERICA], that mighty city! For in one hour
your judgment has come.’

Trapped in this hellish, post Judeo-Christian, soon-to-be-judged Sodom-America are conservative righteous Americans, who are appalled at the moral decline of the nation fueled by the political leaders and cultural elite institutions who are ensuring America gets more depraved than it already is.

Woe to those who call evil good and good evil – Isaiah 5:20. Fight the good fight my fellow Americans! Keep yourselves pure from the vile evil that is constantly being presented as good in today’s America. As God had promised Abraham, the same promise holds true for the righteous people of America – the Sodom of today. When judgment comes, when the nuclear bombs drop, God will not judge the righteous Americans with the wicked. “Watch therefore, and pray always that you may be counted worthy to escape all these things that will come to pass, and to stand before the Son of Man”  – Luke 21:36. God will provide an escape plan for the righteous people of America, before He judges the United States of America: The American Rapture – Isaiah 18.