Home/Opinions, September 2018/Is The Future Of America An Avalanche Of Socialism?

Is The Future Of America An Avalanche Of Socialism?

America is an avalanche heading down hill and picking up speed.  Millions of millennials (dumb, brainwashed kids) deadbeats, bloodsuckers and blind socialists are in that avalanche.  The question is, can we stop it before it takes us all to Hell?

Every time you turn around today, a new socialist politician rises up out of a subterranean, guano littered cavern to announce that socialism is the only right way for America.  In primary elections the new socialist is beating long-term, well-known politicians, at least on the Democrat side.  They are winning in some isolated cases because the new socialist makes big promises (with our money) just as the Democrats have, to their dumbed-down, socialist indoctrinated, usually big-city constituents.

Socialism to the socialist and the mindless voter, of course, means free food, clothing, rent, health 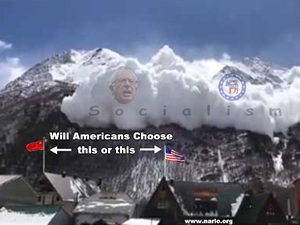 care and cash to the lazy able bodied and the fried brain deadbeats of society that have been brainwashed into believing that everything they get is “free.”   The cost of all the hundreds of federal, state and local socialist programs is irrelevant to them just so long as the government keeps their checks coming every month.

Socialism means “let-’em-all-in” open borders and no ICE to deport those that cross illegally.  Socialism means sanctuary cities for murderers, rapists, robbers, drug dealers, scam artists, the diseased and other dredges of society.

Socialism means radical environmental protection and a belief in man-caused global warming as a mandatory requirement for being a good socialist (or is it brain dead puppet).

Socialism means dependency on government.  It is contrary to freedom, unalienable rights, self-reliance and individual responsibility.

Socialism means that individual rights are subordinate to the collective, in direct violation of the Constitution.  Multi-culturalism, a failed government model, is a main tenet of Socialism.

Socialism means that only collectivist thought is allowed and all other individual thought or actions are to be vilified and demeaned as mean spirited, homophobic, xenophobic, misogynist, or racist.

The U. S. Constitution is an impediment to socialism and must be radically altered to allow the “principles” of socialism to enter the main stream.

Socialism is the unconscionable, burdensome, usury taxation to pay for over-budget social programs.

Socialism means endless regulations against any and all human activity.  The masses are dumb and un-educated, can’t think for themselves and must have “Big Brother” government make decisions for them using law.  That’s why socialist Democrats like the illegal alien uneducated peasants coming across our borders from Central and South America.

Americans must be saved from themselves by the all-wise, all-knowing, all-seeing MOTHER government.

For at least 100 years once free Americans have either willingly or unknowingly, given the power of the chains of slavery to the socialists in our midst.  And those chains come in the form of millions of laws, regulations, restrictions and ordinances.  Most of those laws have no Constitutional foundation.

As government was using the money from our public treasury to buy votes with the promise of “free” everything to the naive and ignorant among us, the rest of us had our heads stuck in the sand and were oblivious to the hidden treachery lurking in the diabolical minds of those in power, that were using every liberal trick in the book to remain in power.   They still are.

From Teddy Roosevelt (and maybe even Lincoln) all the way up to Obama, government has been working at cross-purposes to American freedom and sovereignty.   Government socialists have bought off the masses and special interest groups with money, benefits and special favors and now those masses and special interest groups vie for the slop that is poured into government pig troughs every day.  Like birds at a bird feeder, they jockey for position to make sure they get their “fair” share.  Like a pride of lions over a kill, they snarl at each other for a piece of the decaying flesh.  Government and the Socialist Democrats have turned the American people into beasts, acting against each other, to the point that we now stand as a nation hopelessly divided.

Predictably we find ourselves in a quicksand of our own making, having forgotten that the foundation of liberty must always be preserved by the eternal vigilance of those that will settle for nothing less than freedom.  Although our ultimate destination still remains dire, there is a chance that freedom can be preserved and we will be pulled mercifully from the quicksand we created by our own in-attention to the winged evils that were circling menacingly overhead.  As Marcus Tullius Cicero (106 to 43 BC) stated:

“A nation can survive its fools, and even the ambitious. But it cannot survive treason from within. An enemy at the gates is less formidable, for he is known and carries his banner openly. But the traitor moves amongst those within the gate freely, his sly whispers rustling through all the alleys, heard in the very halls of government itself. For the traitor appears not a traitor; he speaks in accents familiar to his victims, and he wears their face and their arguments, he appeals to the baseness that lies deep in the hearts of all men. He rots the soul of a nation, he works secretly and unknown in the night to undermine the pillars of the city, he infects the body politic so that it can no longer resist. A murderer is less to fear.”  (We’ll let you decided who is the “enemy at the gate.”)

But not everyone is buying socialism and social Democrats.  In fact, millions of Americans are openly hostile and opposed to socialism and “Big Brother” government and that is why they voted for Donald Trump for president in large numbers, even though “The Donald” has a lot of warts.

Those that voted for Trump are angry and they are spoiling for a fight.  If he resigns, is driven from office, or is impeached, there very well could by a civil war.  After all, Donald Trump voters have most of the guns and hundreds of thousands (if not millions) of those Trump voters are ready to rumble.  All they need is a little push, or a “trigger.”  If Republicans lose the House, or the Senate, or both, Trump will be impotent to accomplish anything else, except to veto any legislation the Democrats want to pass.   Could that be the “trigger” to a civil war?

Yes, we can stop the socialism avalanche.  Even though we have not heeded the warnings that were all around us, we still have an opportunity to save our Republic this November and continue the work of conservatives.  It may be our last opportunity.  And the opportunity did not arise from our own intellect and our own desire to preserve freedom, but was thrust upon us by the enemies of freedom that exist in the false ideology of irrational liberalism and mind-numbing socialism.

As if delivered by providence at a precarious time, Donald Trump came among us, woke up the silent majority and at the same time poured gasoline on a flawed ideology that was and is the antithesis of freedom and liberty.  In so doing he has stirred up a killer bees nest of globalists, liberal journalists, establishment politicians and deep state bureaucrats.

But President Trump has delivered the antidote and the anti-venom to the scourge of rising socialism, provided he is not forced to resign or impeached by the globalists, the socialists, the establishment and the deep state.  The attempts by the media, the left and the socialist Democrats to undermine him and his agenda are unprecedented in modern history.  Yes, Trump does give them a reason for negative reporting.

But our vote for Conservatives in 2018 and even the re-election of Trump in 2020 is not enough to stop the avalanche of socialism that is sure to come if further action is not taken.  The temporary continuation of the Trump agenda cannot last forever.   Socialism will raise its ugly head again and again.  The propaganda power of the public schools and colleges, over several generations, is overwhelming.  As it stands right now, that socialist, collectivist mindset has been set in stone in a very large percentage of the American population, especially those who live in big cities.  Until there is a massive mindset shift towards conservative principles, America has no hope as a free nation.  That mindset shift can only come from an emotionally powerful visual, audio and print message repeated over and over again.  Such an emotionally powerful message has the capability to overcome the generational brainwashing of millennials and middle aged Americans. The fact is, you can’t change public policy unless you change the mindset of the masses!  Short of this, all other mechanisms for change will eventually fail.

In search of that emotionally powerful, visual, audio and print message we have developed “THE Save the USA PLAN.”  Our Plan could only be successful in this age of television and social media.  The Plan should appeal to those millions of Conservatives that have had ENOUGH of the last 100 years of socialist Democrat swill.