Trump’s recent foray into regime change and nation building in Syria has shaken some of his campaign supporters to the core and rattled their broad-based (almost unconditional) confidence. His Tomahawk attack on Syria represents a 180-degree reversal from his campaign rhetoric criticizing Obama era incursions into unilateral regime change across the Middle East over the past eight years.

On 3 April, 2017… President Trump signed an order departing from Obama era regime change policies in Syria and the Middle East. On 4 April, 2017, Syrian President Assad was accused of dropping chemical weapons on the ISIS stronghold town of Khan Sheikhoun, wherein a reported 74 were killed, including 23 children. On 7 April, 2017, President Trump launched a unilateral missile assault on a Syrian air base from which Assad allegedly launched his chemical assault three-days earlier, destroying an estimated 20% of the planes on the ground and none of the runways. 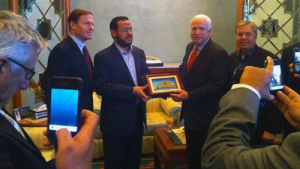 But the U.S. intelligence community was telling President Trump a very different version of events on the ground in Syria. U.S. Intelligence officers and National Security Advisors had very quickly convinced Trump that Assad had “once again used chemical weapons on his own people.” U.S. Intelligence tends to refer to Assad opposition in Syria as “rebels” or “freedom fighters.” Yet, Syrians on the ground have repeatedly accused the U.S. of funding, arming and supporting ISIS and Al Qaeda since 2013.

It’s no secret that Obama, Clinton, Kerry, McCain and Graham have been toppling foreign governments across the Middle East from Libya and Lebanon to Egypt and beyond, installing the Muslim Brotherhood into power in each incident – or that they likewise, set their sights on deposing Assad in Syria long ago.

It’s also no secret that the war-for-profit (Military Industrial Complex) crowd in the U.S. has been involved in numerous “regime change” operations across the Middle East during the Obama administration, or that this is the group that has been “leaking” intel from inside Trump’s White House, and supplying intel to Trump that resulted in his missile attack in Syria. They are also pushing Trump to put boots on the ground in Syria.

Trump’s policy reversal and unilateral attack on Syria resulted in an immediate and somewhat violent backlash from about half of his voters, who found themselves in social media tussles with the other 50% of Trump loyalists who never separated Trump’s well-intended decision from the quality of intel he was acting on, delivered by the likes of McCain and Graham, both of whom have been anti-Trump from the start.

Not only had Trump’s opponents succeeded in getting Trump to reverse his policy and unilaterally attack Syria without provocation, they were succeeding in dividing Trump loyalists in that process.

Clearly, there are two very different conflicting stories regarding chemical attacks in Syria and who may be responsible for the release of chemical or biological gas in Syria. It’s only a little odd that many Trump supporters supported Trump’s decision to strike Syria, even though the attack was unprovoked and without congressional authorization… But it is very odd that those folks would suddenly trust the very swamp creatures Trump was supposed to drain, and the intel they provided to get Trump to take that action…

Half of Trump supporters oppose Trump’s attack on Syria – not because they no longer believe in Trump, but because they still don’t believe in the swamp creatures providing the intel. The other half support Trump without ever considering the possibility that the same people they didn’t trust before, may now be feeding rotten intel to Trump.

Even as they watch the “leaked” internal conflict between Bannon and neocons surrounding Trump, they just can’t do the math…

So, what’s the truth here? Were chemical weapons used in Syria and if so, by whom?

(The Syrians) asked me, “Why are the United States and its allies supporting these terror groups which are destroying Syria, when it was al Qaeda that attacked the United States on 9/11, not Syria.’ I didn’t have an answer to them.”

The US government claims it does not fund these groups and only provides assistance to so-called moderate rebels. However, Gabbard said the Syrians she met with told her that there are no moderate rebels in the country. “Let the Syrian people themselves determine their future, not the United States, not some foreign country,” Gabbard said.”

Who is Lt. General McMasters?

The adviser, Lt. Gen. H. R. McMaster, told the staff of the National Security Council on Thursday, in his first “all hands” staff meeting, that the label “radical Islamic terrorism” was not helpful because terrorists are “un-Islamic,” according to people who were in the meeting.

Could Trump’s 180-degree reversal on Syria have anything to do with the pro-Islam advice he is now receiving from McMasters? What is McMasters association with Obama era advisors, or McCain and Graham? Despite overwhelming evidence to the contrary, why does McMasters defend the brutal nature of Islam taken directly from the Quran?

As reported by Rick Wells, Lou Dobbs is the only newsman in America asking the right questions. PolitiFact points out that Trump’s new policy in Syria is nothing more than Obama’s old policy for the entire Middle East. It should shock no one that the “gang of eight” and the leftist media is finally all behind Trump, as they push him into unilateral military action against a sovereign state, just as Obama had done in several other foreign countries.

Meanwhile, McCain and Co. are busy stripping Trump’s budget of any funds for “the wall” Trump promised to build, as they continue to side with the importing of jihadists via refugee resettlement and open the borders to all comers, including drug cartels and violent gangs like. And… the only man truly loyal to Trump in the White House, Bannon, is on his way out!

Clearly, Trump is losing the battle for leadership in America to his opponents in the ongoing showdown with Soros NGOs and globalists on both sides of the political aisle.

This is a picture of U.S. Senators McCain, Graham and Blumenthal giving an honorary service award to Abdel Hakim Belhadj — the former head of the al Qaeda-linked Libyan Islamic Fighting Group, and a major player in the U.S.-backed overthrow of Moammar Gadhafi, has reportedly joined the Islamic State and is leading its forces there.

On 20 December, 2016 – I asked “Will we really drain the swamp?” and offered three very basic high-priority items Trump would have to address immediately, or he would be consumed by the swamp. Trump did not do any of those three things and today, he finds himself rapidly sinking in the quicksand, surrounded by swamp creatures advising his demise.

Can Trump still clutch victory from the jaws of defeat?

Yes, he can… But will he? Unfortunately, with each passing day, it becomes less and less likely as he grows ever more influenced by and dependent upon the “expert advice” of his adversaries.

Every time you see McCain, Graham or the main stream media backing Trump, you know that Trump is doing something wrong. Sadly, too many Americans exist in an echo chamber void of any facts or truths. Even more unfortunate is the fact that they like it that way…

I have repeatedly warned that “the people” would have to stand shoulder-to-shoulder with Trump or Trump would be eaten alive in that swamp. Is Trump failing the people? Or did the people fail Trump?