Islam Is Incompatible With Liberty

As Islam repelled me, something about America attracted me like a powerful magnet. It was the heart and soul of America. It is called liberty. Liberty embodies the most precious treasures of humanity by encompassing seven forms of freedom that collectively make us human. Without liberty, we are simply another species of primates. Islam is anathema to each and every one of these freedoms.

Dennis Prager’s Still the Best Hope succinctly lists what constitutes this overarching charter of being human. Throughout this book, I will present indisputable evidence proving Islam’s incompatibility with them. The choice is either liberty or Islam. We can’t have it both ways.

The right to freely elect the government and the government rule by the consent of the people. Islam by definition is a belief of surrender. The surrender of the people’s right to choose their government to Allah’s rule as ordained by his infallible one and only final emissary, Muhammad. In countries where Islam wields great power, such as Saudi Arabia and Iran, people have no choice whatsoever in choosing their governments. Any attempt by the people to exercise this precious form of freedom is brutally dealt with by the authorities. The earth is Allah’s, people are vessels of Allah, and the rulers are Allah’s appointed shepherds of his flock, so goes the belief.

The right to practice any religion or no religion, as well as separating religion from state.  Non- 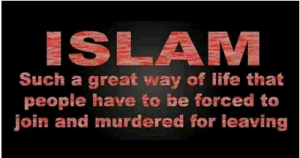 Muslim rights are strictly curtailed. Lip service is paid, from time to time, to religions of the book, Judaism and Christianity. Yet, in practice, even these sanctioned minorities are treated discriminatorily. Jewish and Christians are classified as dhimmis, they are subjected to special religious taxes, and disenfranchised from many rights of citizenship. Separation of the mosque and the state is considered another abhorrent frivolity of the non-Islamic heathen societies. The mosque is the state in Islamic lands, either directly or indirectly.

The right to gather and associate with any individual or group. Religious minorities are frequently forbidden from assembling together and freedom of association is an alien concept in Islam.  Muslims are warned against associating with non-Muslims, they are not to come in any contacts with them, much less break bread with infidels.  Non-Muslims are considered najes—unclean. The right of assembly is reserved for the Islamic sanctioned events such as the numerous religious theatrics and government orchestrated demonstrations. 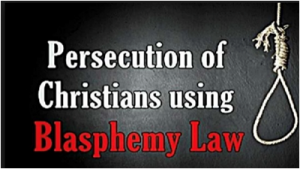 observance of holidays. Non-approved religious groups, and that covers all who do not toe the line of the dominating Islamic sect, are harassed and disenfranchised on a graded scale. In Shi’as lands, Sunnis receive less than fair treatments. Others, such as Christians and Jews are next in terms of exercising their rights. Then, a host of other religious minorities, such as Baha’is and Sufis face the severest variety of restrictions and outright persecutions.

The right to express oneself, short of “falsely shouting ‘fire’ in a crowded theatre. Freedom of speech indeed exists in Islamic societies, as long as you sing the praises of Islam and the ruling system. Any honest criticism of the ruling system is taken as an attempt to discredit and distort facts. Woe unto anyone who dares to utter the slightest objections to the draconian Islamic laws and its primitive teachings. Expressing disagreement with denigration of women status, for instance, is a sure way of incurring the wrath of the state. Islamic government and powerful Islamic organizations avidly campaign for a universal adoption of what they call blasphemy laws. They propose severe punishment for any individual or organization that in any form and shape speaks unfavorably about Islam, Muhammad, or Islamic sanctity. Conveniently, they neglect to stipulate the same provisions for other religions.

Why stifle free expression? If Islam is indeed the treasure that the Muslims claim, it should be impervious to any criticism. In fact, the more Islam is critically examined it should allow everyone, Muslims and non-Muslims, to make up their own mind.

These blasphemy laws are used as another tool of punishing critical comments by non-Muslims, as well as those of dissenting Muslim.

The right to engage in a business and keep as much of the earning as legally possible. Where Islam 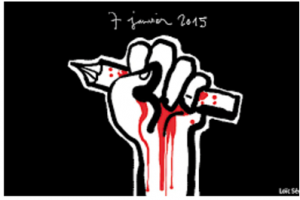 rules, Islam rules all matters, including economic matters. There is a degree of freedom in this area, with some restrictions. You may, for instance, operate a restaurant or work in one. Yet, for one full month every year, your restaurant must shut down from sunrise to sunset to honor the fasting month of Ramadan. Or, financing a business venture must follow the Islamic rule of lending and borrowing money. Subterfuges are used on this matter whenever it suits the state and when it does not the violators are punished by invoking the usury laws.

Freedom of the press

The right of publications and other media to advocate anything legal. There is an inverse relationship between the extent of the Islamic rule and the freedom of the press. The greater the rule, the less is freedom of the press. Where Islam wields great power, the role of the press is to sing the praises of the system and report only on matters approved by the authorities. Legions of journalists are routinely meted short and long-term prison sentences, are heavily fined, and, their publications banned for aiming to report the truth.

Freedom from the state

Government orders the minutest details of personal life, from mode of dress, to even subjects that women are barred from studying in college—dozens of them The Islamic Republic of Iran currently lags behind the Taliban in Afghanistan where even girls were forbidden to attend school, risking death for violating the savagery. Saudi Arabia still denies women the right to vote or hold elected offices. Women may not travel abroad without written permission from a male parent or husband. Interference into personal life of the individual is legion.

Islam clashes head on with every one of these seven pillars of liberty.