Islam Is Not A Religion, It’s A Fraud

From the primitive land of the Arabian Peninsula of over 14 centuries ago rose Muhammad, an illiterate hired hand of a rich widow Khadija, claiming he was the bearer of a perfect life prescription from God—the Quran. He claimed humanity could do no better than to follow its precepts as well as to emulate Muhammad’s own life example for a guarantee of bliss and salvation. In exchange for this, people had to embrace Islam—surrender—by surrendering their liberty to Muhammad.

Islam is the most successful fraud in the history of humanity and has been a great success. Millions of mullahs and imams keep the fraud going and over a billion and a half of the faithful pay for it. They pay in funds, labor and even life, for the IOUs issued to them by the Islamic organizations that glide through life without breaking a sweat for earning their daily bread. Islam is a fraud and Muslims are the victims.

Muhammad, during his Mecca years, was ridiculed for his confused sayings by his own tribe of Quraysh. He was called “shaeron majnoon”—crazed poet.

The death of his first wife and wealthy employer Khadija left Muhammad even more vulnerable to the ridicule and harassment of the Meccans. He fled from Mecca to Medina and in the relative safety of that city with a large tolerant Jewish community, Muhammad found more people willing to join his clique. 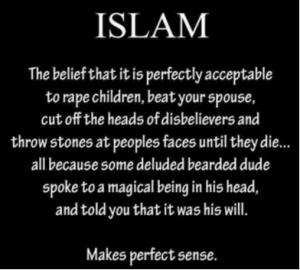 Once in Medina, Muhammad hit on a most powerful formula for success. He justified everything by claiming that Allah wanted it this way. And Allah was nothing to trifle with. He held the key to the most magnificent paradise as well as to a dreadful hell. The duty of every good Muslim became unquestioning obedience to everything that Muhammad said and wished. Muhammad became Allah’s gatekeeper to paradise and hell.

Muhammad’s formula worked magic with the Bedouins of Arabia who thrived on robbery and killing. His religion spread like a pandemic disease in no time at all.

As Muhammad gathered more and more followers, he turned on the Jewish community of Medina, killed the men, plundered their belongings, and captured their women and children as slaves. That was the birth of “Jihad.” Be meek and deceptive first, until you gather enough power then unsheathe the sword. It worked then and it is working today.

In no time at all, the savages of Arabia, allured by the win-win promise of Muhammad—you kill you get the booty from your victims in this world—you get killed and your abode will be the unimaginably glorious sensuous paradise of Allah—sword-in-hand, sallied forth to lands near and far.

As humans, our two legs move us along, but it is our minds that tell us which path to take in life and what to do. As the mind commands so goes the person. Yet, for humans, the mind does not arrive in this world with a set program of instructions. Contrary to many beliefs, we are born neither as demons nor as angels. Within each one of us is a potential for a demon or an angel. Many evolve into a mix of the two, a few fortunate mature into truly angelic and some become personifications of evil. It is the mind’s program that plays the critical role in making us what we are

Islam, from its inception, discovered the crucial secret of getting to the young mind early by adhering to the dictum: Instruction in early childhood is akin to carving in a rock. In the same vein goes the Jesuit saying, “Give me a child until he is seven, and I will give you the man,” derived from the philosophy and theology of Saint Augustine. The immense importance of getting early to the young mind is also emphasized by non-religious doctrines as diverse as the Freudian psychoanalytic theory and Watsonian Behaviorist psychology.

And here we are in the 21st century facing the onslaught of the Islamists, jihadist and Islam apologists in our culture and way of life. These are the fruits of the tree of fraud, planted by Muhammad some 1400 years ago.

Self-described doctors of Islamic religion universally practice sugarcoating the fraud of Islam. They keep ranting about the importance of accepting things on faith, denigrate reason, dangle carrots and sticks, and demand unconditional surrender in return for guaranteed bliss and salvation. The masses toe the line, support the clergy’s lavish parasitic lifestyle and the charade continues. It works like a charm. Use the Jihad of the sword when it can and use the “Soft Jihad” until the sword can be unsheathed to finish the job. And don’t forget, the end justifies any and all means, Islam apologists keep on preaching to the hordes.

Islam apologists never present the naked face of Islam. They never speak of the Islam that thrives on hate, throws acid in the face of women who fail to don the hijab or girls going to school; flogging people for sporting non-Islamic haircuts,  stoning to death, violators of sexual norms and other forms of Islamic brutalities such as honor killing. They never talk about institutionalized pedophilia in Islam. 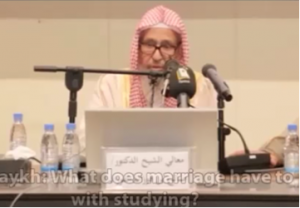 The prophet Muhammad “married” a six-year old child and consummated the marriage when Ayesha was only nine, when he himself was pushing sixty. When apologists are confronted with this repulsive behavior of the founder of their “perfect religion,” a few exercise the defense mechanism of denial and say it did not happen, dismissing their own most trusted historical record. Some say that it wasn’t exactly marriage. It was a politically expedient act, an act of the perfect emissary of Allah. Then we have numerous instances of the same child molestation happening in the Islamic world ever since the example set by Muhammad. It is a kind of marriage of pre-pubescent girls to older men. It was not long ago Dr. Salih bin Fawzan a prominent cleric and member of Saudi Arabia’s highest religious council, issued a fatwa proclaiming that there is no minimum age for marriage, and that girls can be married “even if they are in the cradle.”

Adding insult to injury, Islam has powerful and unwitting allies in the masses of good-hearted gullible Americans who bend over backwards to protect the long-cherished principle of religious freedom. And it is this magnificent provision of our society that made Hillary Clinton, for example, reissue a visa to the likes of Tariq Ramadan who come to exploit the benign provisions of a benevolent system for establishing Islamic enslavement.

A Muslim’s surrender of liberty is not merely a matter of personal choice. Muslims abandon their most precious rights and are out to make all non-Muslims also do so, by hook or crook. It is said that misery loves company. And the type of misery that the fraud of Islam has visited on Muslims and the Islamic lands is a rapidly spreading plague that must be resisted by all who cherish their God-given liberty.

In spite of massive propaganda by Islamic organizations, more and more people are beginning to recognize Islam for what it is: A Fraud.

I challenge all cultural Muslims or any other kind of Muslim who is not a jihadist, to courageously do what is right, and take that fateful step; inhale the life-nurturing fragrance of freedom, abandon the fraud of Islam altogether and enlist in the ranks of the free where all members of the human tribe can live in peace and harmony.